In common with Magic Weekends the final game of the day tends to be set of as the one that should be the best on the day. With that in […]

In common with Magic Weekends the final game of the day tends to be set of as the one that should be the best on the day.

With that in mind we had Bradford Bulls v Halifax to look forward to.

Bulls relegated along with Broncos had fared better in the league with 11 wins from their 12 games played, only Leigh Centurions, with a 100% record, sat above them.

Halifax with 13 games played started the day in 5th spot with 7 of their games won.

Another local derby both teams had a good number of fans in the stadium – in fact the Bulls fans were a highlight of the day! 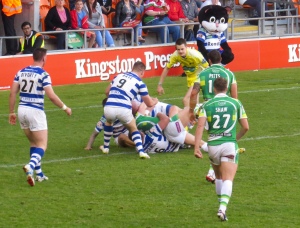 It’s interesting to read that James Lowes Bulls’ coach had launched a scathing attack on the whole event, stating that he’d rather be playing Halifax at The Shay.

The hugely vocal Bulls fans clearly didn’t agree – they were amazing in the 2nd half!  I’m not sure many of them took a breath in between singing!

This was one where I was expecting a big scoreline – but the power of a local derby is a very big thing.

Halifax were the team with the lions share of the ball in the 1st half but they just couldn’t turn possession into points.

It was a whole 35 minutes into the game before any points were scored and in spite of the Halifax pressure it was Ryan Shaw who scored for the Bulls – He added the extra 2 from the Tee. 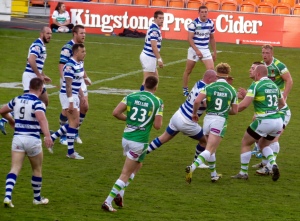 Bulls extended their lead through a great try by Adrian Purtell – Shaw again converted the try to see Bulls go in 12 points ahead at half time.

A word for the cheerleaders at this point – the dance groups are often if we’re honest not too good, many seem to be wearing personal stereos! 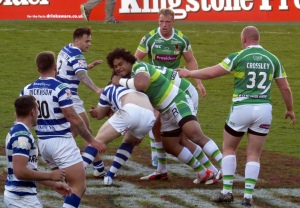 However as is often the case at the big rugby league events these girls were actually very good!  Credit to them over the whole weekend – they must have been freezing at times!

Halifax returned full of fire again and got their only points on the board – a try scored by Ben Heaton, again in spite of their endeavours they weren’t able to add to their 4. 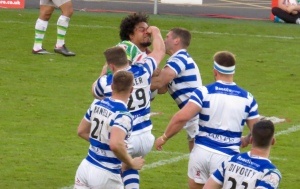 Bulls however added to their tally through another Purtell try – Danny Addy was the kicker this time and he took the score to 18.

The match finished on Bradford Bulls 18 Halifax 4.  Chatting to some Bulls fans as I walked away they agreed that Halifax seemed to want the game more; but the expected extra fitness and recent Superleague pedigree shone through for the Bulls.

Day one was over – and a very find day it was too!  I took a walk along the front to take in the sunset and a few of the sights.  I managed to make myself look stupid when I called for a taxi – saying I was outside the Pier – I had no idea there were 3!

My dinner consisted of 2 biscuits and a cuppa!   Not so brilliant – I really can be rubbish when it comes to organising food for myself!  I was saving fish & chips for the Monday – more to come on that later on!

As I’ve added the photos in to my words I must just say – Green???  Not loving that kit Bulls!