How to explain the Challenge Cup Final?  It’s a wonderful afternoon out!  No matter which teams are playing you will see a shirt from virtually every rugby league club in […]

How to explain the Challenge Cup Final?  It’s a wonderful afternoon out!  No matter which teams are playing you will see a shirt from virtually every rugby league club in the country.  The place is a sea of colour, yes each end is predominantly filled by the 2 teams participating but people cope from fat and wide.

My good rugby league friend Michael had bought our tickets the day they came out just after the 2014 final. we were again sitting literally on the halfway line!  Michael’s Dad usually comes with him but couldn’t make it this time so we had a newcomer with us. 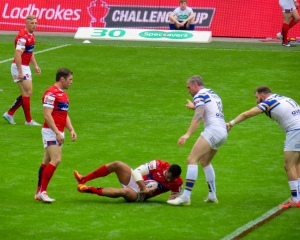 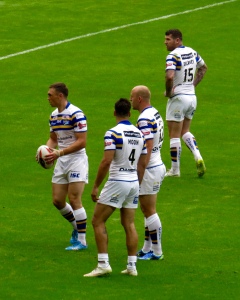 My South African sports mad friend Sharneen hand never been to a league game before, this was something of a big game as a first experience.  The atmosphere was pretty amazing as always and Sharneen pointed out something I haven’t noticed before; the Leeds and Hull KR fans in each end seems to take turns to sing!  How polite! 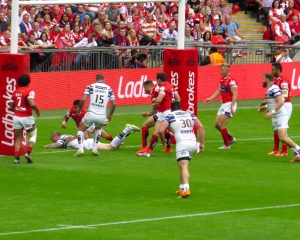 One of the rich traditions of the Final is the rendition of Abide With Me this year the song was performed by Lizzie Jones wife of Danny Jones the Keighley Cougars player who collapsed as he left the pitch at London Skolars earlier in the year, he didn’t regain consciousness, leaving Lizzie a widow and their 5 month old twins without a father.  Wow Lizzie can sing!  She was incredible, there wasn’t a dry eye in the place.

I’d been to both semi-finals and both Leeds and Hull KR had convincing wins to reach the final, sensible money was on The Rhinos to win but I’m sure everyone hoped we’d see a good, competitive game. 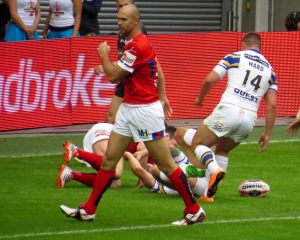 Leeds had won in 2014 giving their current crop of players their first Challenge Cup trophy, it was great to see Kevin Sinfield lift the cup.  Could they repeat the result and give Sinfield, leaving to go to Leeds Carnegie and Jamie Peacock retiring something to remember. 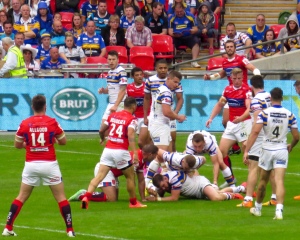 Without going into too much detail, yes they could!  Leeds were the superior team in every way.  They’d held the record for the highest score gap after beating my team London Broncos 52 to 16 in 1999, in whitewashing Hull KR and putting 50 points on the score board they removed the Broncos from a record they didn’t want to hold. 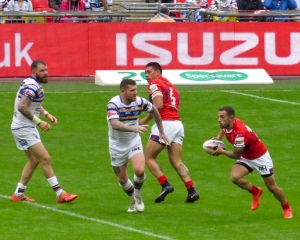 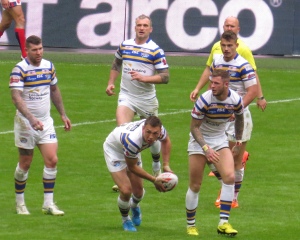 Another record was snatched away, this time from Martin Offiah, his 4 tries were surpassed by Tom Briscoe who ran in 5 of Leeds tries.  Including one from virtually his own try line, that may well have broken another of Offiah’s records. 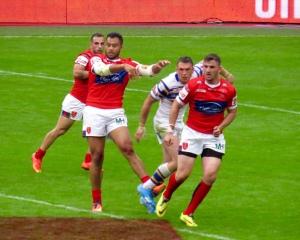 Nothing went right for Hull KR and poor Kieron Dixon had something of a nightmare in the 2nd half, but the whole team failed to perform, they didn’t look like scoring a try at any time!

And so Leeds Rhinos were worthy winners with their 50 nil win, I always like an underdog I must admit but I wasn’t sorry to see Kevin Sinfield lift that trophy again, he’s been a loyal Leeds man and is a real legend of the game.  And Jamie Peacock’s broad grin as he walked round the pitch with the trophy was a sight to behold.

One fact from the day –

I try not to buy anything in the stadium the prices are crazy – I bought a bottle of water which I think cost me £2.20.  Oh and there were plenty of clean ladies toilets! 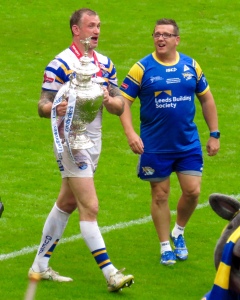 An addendum, I’d advised Sharneen, a big rugby union fan to watch the match with fresh eyes, not to watch and think – this isn’t like union – I’d advise anyone watching either game not to compare it to the other!  That way worked for Sharneen and this was a very one sided match, she’ll be back!