Game 2 of the Premiership Double Header had a lot to live up to, this was a London Irish home game and we were treated to another group of dancers.  It was, I confess hard not to dance along to the 80’s music – in fact I did a little as well as sing quite loud!  We had some Irish music in the run up too, it was lovely!

Wasps started strongly going on the attack, they went very close with a forwards drive, before Blair Cowan was penalised to give Ruaridh Jackson his first shot at the posts and Wasps their first 3 points. 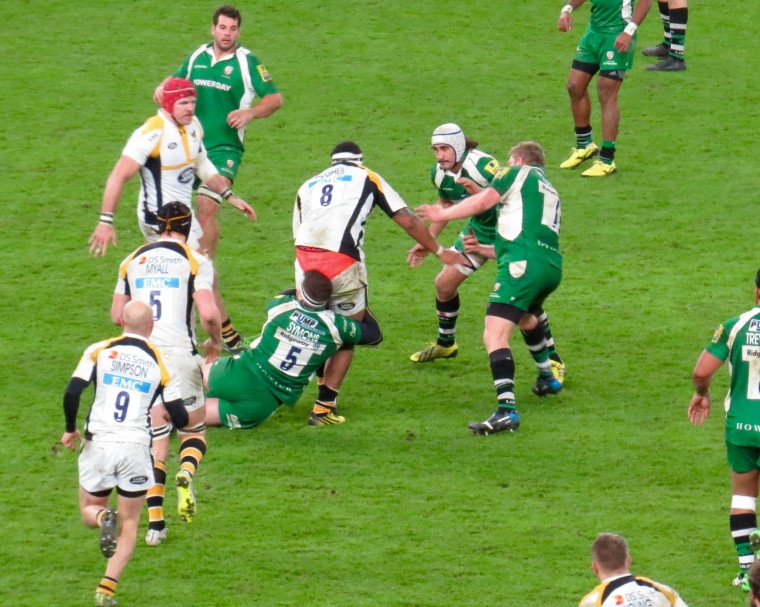 London Irish showed some flair with Ofisa Treviranus making a wonderful break through the middle, the move came to nothing as they were pushed into touch – bizarrely a boot went flying in the run up, so we had a bit of stoppage time until it was reunited with its owner. 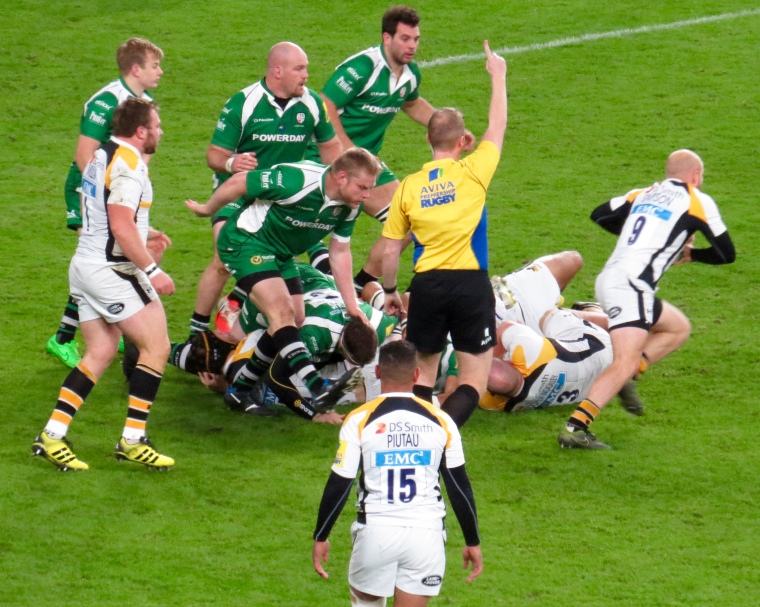 I’m not planning to write too much about this match (that usually changes) – it was always going to struggle to live up to the opener.  One thing I do have to comment on is how good Wayne Barnes is at talking to the players, one of the benefits of a Twickenham match is ref link – I can highly recommend it, it gives a great insight into how the referee runs the match. 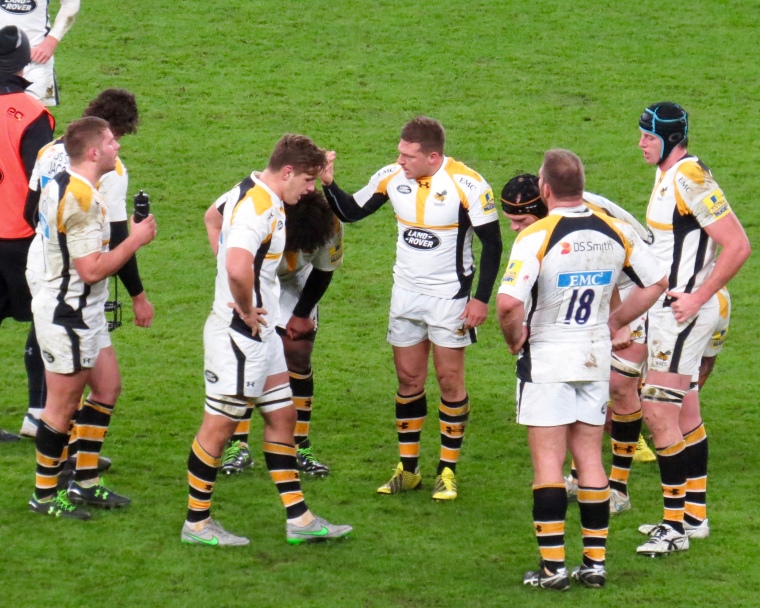 London Irish score a penalty through Chris Noakes, given for a head grab – by Nathan Hughes.  A key feature of the first half was, I thought, that  both teams look hesitant in midfield at times, it didn’t make for thrilling rugby.

Wasps were awarded 2 penalties in fairly quick succession, one was missed one converted by  Jackson.  Noakes similarly missed his own penalty minutes later. 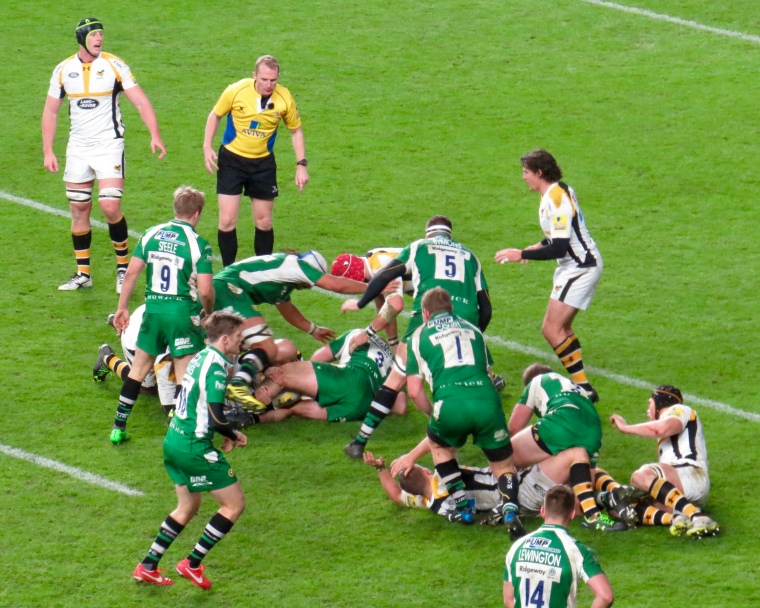 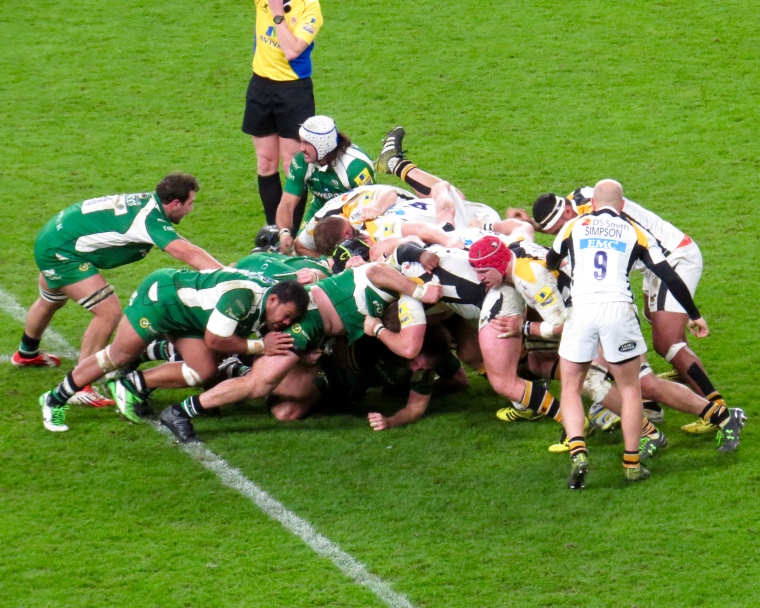 Alex Lexington who was Saracens’ tormentor during my one visit to Reading, made a great run, he really is impressive at speed, but this time he was taken into touch.

With time running out in the first half it felt like we’d be without a try but  Joe Simpson did his thing for Wasps, popping (not a technical term I know) the ball out of the ruck to Tom Fowlie who leapt over the line to score – At last! 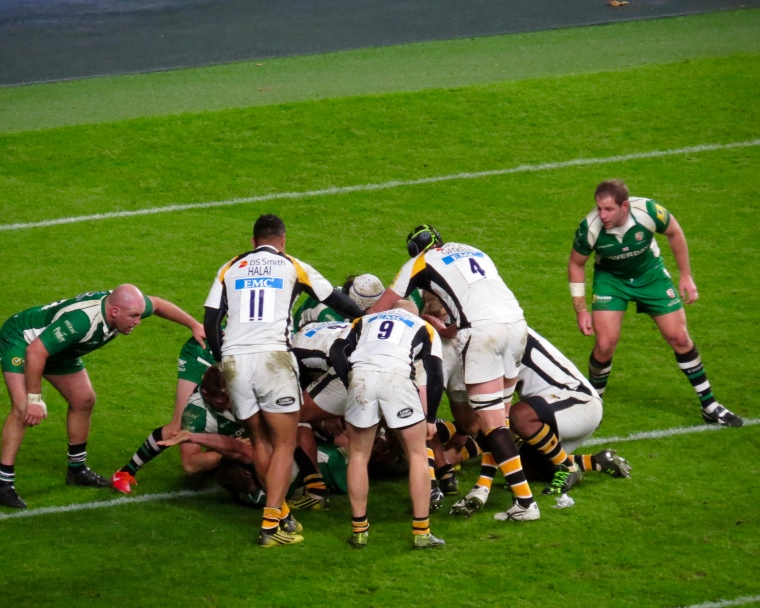 However London Irish weren’t to be left behind, Lexington again made a break, this time having pulled in Wasps defenders the ball was spread out to Johnny Williams who made it 3 tries in 3 games.  The teams went in at half time with the scores on  London Irish 8 Wasps 11 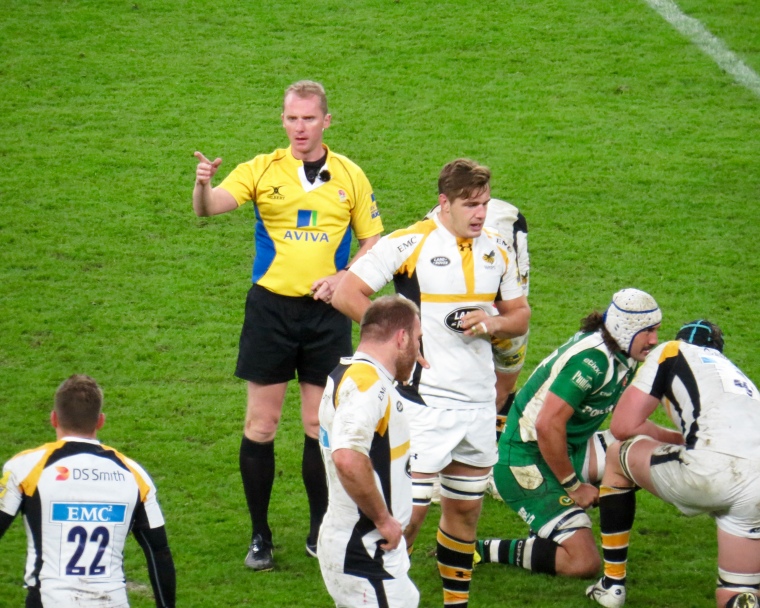 The second half started as a comedy of errors by both sides, with knock ons and poor penalties, and general dullness if I’m totally honest – however Elliot Daly lit the place up as he backed himself running straight through the Irish defenders to score a great try!

Jackson converted the try and Jimmy Gopperth on as a replacement added a penalty to stretch Wasps lead to 13 points.  But again Irish weren’t to be left behind – A lovely chip kick by Topsy Ojo was gathered by Williams who scored his 2nd try of the afternoon.  Noakes added the extras closing that gap to 6.  This wasn’t the rampant Wasps who’d beaten the mighty Toulon the week before, although huge credit must go to Irish for their defensive effort.

My notes taken during the game are less than perfect here – Wasps score a try through a rolling maul – pure strength – very impressive – no idea who?  The who was actually Thomas Young – impossible to see so often from the stands!  Gopperth added the extras.

Frank Halai who’d  looked impressive for Wasps was rewarded for his endeavours with a great try taking the final score to London Irish 15 Wasps 33.  The scoreline wasn’t really a good representation of the game, Irish deserved a losing bonus point at least I’d say.