A fantastic game of A League Rugby!

Amongst the many things I’ve learnt this year 2 facts are that I’m a bit odd when it comes to uneven numbers!  The other is that my camera can take some great sporting photos, but not with poor lighting and damp as the backdrop.  Hence my final event of the year is indeed an even number and doesn’t feature many photos at all!

I knew I’d never make 365 Sporting Events in one year – that of course means I’m going to carry on into 2016.  With a few changes to 365 Sporting Days, I’m going to bring all of my writing into the one website and probably invite some guest bloggers in to contribute too! So changes afoot in 2016!

But, for now I’m going to write about my final event for 2015.  As I’d been in Twickenham to watch the Quins A match and this match was a mere 30 minutes away it was rude not to go! I arrived in plenty of time and in need of food, so made my way to the Toby Inn on the same site and ordered soup and ice cream!  Not at the same time of course, but just what I fancied after an afternoon that almost made it feel like Winter was here. 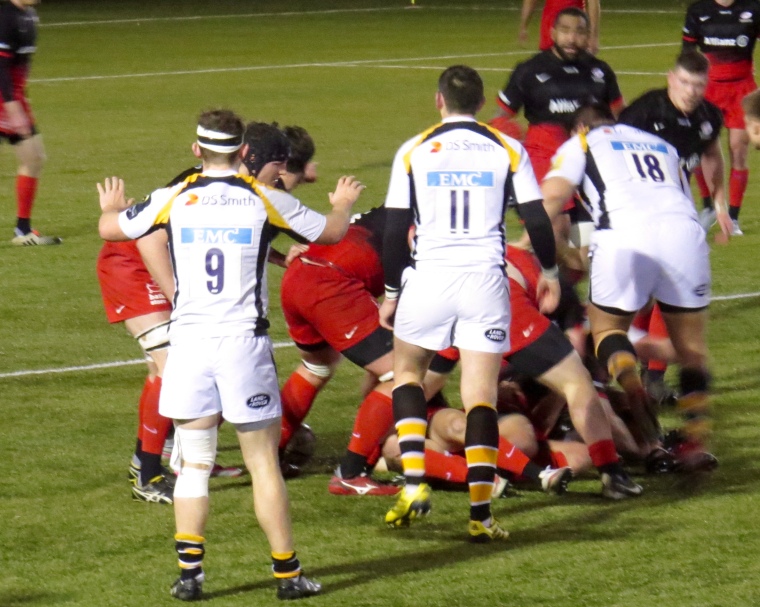 Wasps had played 2 won 1 – Saracens played 2 won 2.  So no real indicator of how the game might go.  Maidenhead RFC have a very decent facility with a 4G pitch, so a surface the visitors are used to playing on.

A mix of experienced heads as well as bright young stars – Although no Jacques Burger this time, I have to say I’m sure there was a sigh of relief at his name being missing.

I was at this game as a Saracens fan, yet wow I enjoyed the play from both teams! If anything it was Wasps who played the more expansive rugby.  I am that odd person who cheers both teams even when it’s my team being scored against!  I had plenty of opportunity to make a noise!

I took notes on my phone, but looking back at them they seem to be rather patchy, but I’ll do my best!

Saracens had a great opportunity early on, and here’s the patchy part – I didn’t note the name of the player who should have passed to Nathan Earle who was free outside him.  A try squandered I’d say.

It was Wasps who scored the first try as a Nils Mordt pass was intercepted by Brendan Macken, he raced half the length of the pitch to score.  It was impressive to see the conversion taken by one of the U18 Academy players on the pitch Connor Eastgate.

As a club Saracens seem to have a winning habit however and didn’t let that early try concern them.  They were awarded a penalty from the kick off and went to touch.  Mordt put in a long pass straight into touch but a further penalty was waiting.  Saracens again went for play rather than the posts and Nick Tompkins, who’s featured regularly in the first team this season, scored the visitors first try.  Mordt converted to even up the scores.

Saracens next score came from a scrum on the Wasps line after they’d charged a kick down.  The referee seemed to go to his whistle, awarding a penalty try very quickly to me, unable to see exactly what had happened may make that an unfair judgement, but that’s how it seemed from afar.

Excitement seemed to be the order of the day for Wasps and their next try was certainly worthy of that label.  Josh Bassett ordinarily a winger, but playing at 12, he broke through the Saracens tacklers to score.  The conversion took the score to 14 apiece.

Saracens proved that they too have exciting runners after Ben Ransom (twinkle toes) ran the ball out of his own half, passing to the very speedy Earle who ran down the line, a great move but no points.

Wasps took a blow when Tom Bristol was sent to the naughty step for 10 minutes for pulling the ruck down near his own line.  Saracens failed to capitalise both on the position and the extra man.  In fact Wasps scored when they were in effect down to 13 men through James Cannon.  Bassett and Alex Reider had put in the work to take the ball to the Saracens half. The conversion took Wasps to 21.

Saracens hit back quickly being awarded a second penalty try on 30 minutes as Wasps pulled down a maul from a scrum that looked certain to go over.  Back to evens again and the teams went in at half time with the scores on Wasps 21 Saracens 21.

The second half started with 2 tries for Saracens, the first scored by Nathan Earle, he ran through with real pace to score, fairly unstoppable.  the second saw Titi Lamositele the replacement prop go over the line to score.  Mordt was successful with both kicks giving Saracens a 14 point lead for the first time in the game.

Wasps weren’t fazed however their forwards showed their strength and replacement prop Camilo Parilli-Ocampo powered his way over to close the gap, the conversion was missed.

Wasps next try came after an immense rolling maul from their own half to the Saracens 22!  Saracens were penalised for pulling the maul down, a scrum was set (that might be the wrong order) and to be honest – Saracens messed about with it!  The ball appeared and Connor Eastgate dived on the ball to score!  The gap was closing – the score Wasps 31 Saracens 35. 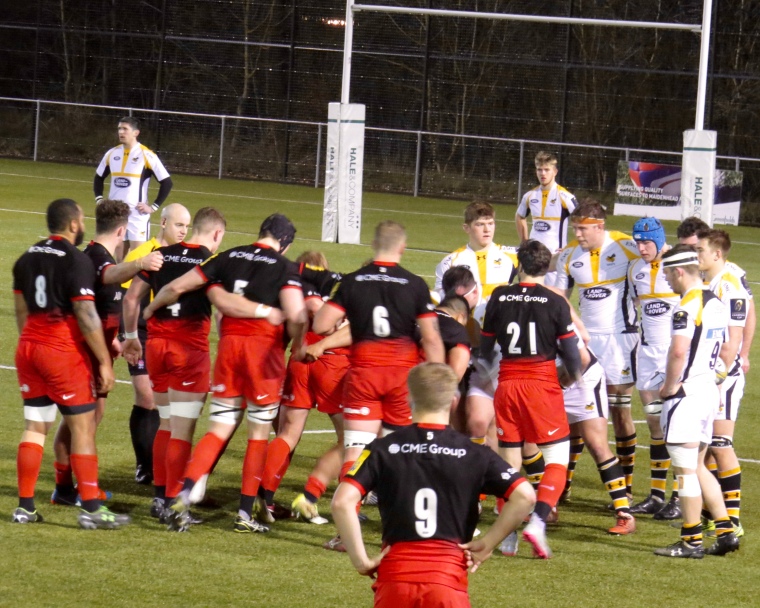 Back Saracens came again, this time with Tompkins getting his 2nd try running at speed don the wing.  The kick was a difficult one, but converted by Nils Mordt.  31 to 42!

However as had been the way with this game Wasps hadn’t given up in the scoring front – scrum half Jamie Stevenson scampered over to score, with no conversion the score moved on to Wasps 36 Saracens Storm 42!

And that was how things finished – I can honestly say this would have been another game where a draw would’ve been a fair result!  It was a joy to watch the bright young stars along with some first team players!

Apologies for the lack of photos – you know lots more will follow in 2016!