I thought my 2015 sporting year was topped off with The Big Game, until Connor O’Shea mention an A League game being played at The Stoop the next day! That would have taken me to an odd number of events for the year so I searched A League fixtures and found Saracens Storm playing Wasps in Maidenhead in the evening!  2 games it would have to be!

The A League is split in two, with a Northern and Southern Conference and Bristol added to the 12 Premiership clubs.  Standings after these games can be found through the link below.

Those results suggested there was a clear favourite, especially with the game being played at The Stoop.

The mix of players in the A teams always intrigues me!  To rock up to Allianz Park for example and find yourself, as a young player breaking through, facing the likes of Jacques Burger must be as frightening as it is thrilling! In this case there were 2 stand out names for me – Dom Waldouck for Irish and former Welsh and British Lion Adam Jones lining up for Quins! 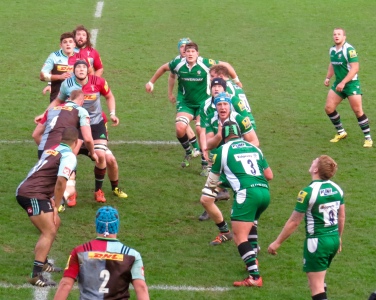 There were players on the team sheets I’d seen play for the U18’s Academy teams in the same fixture at Hazelwood on December 19th including Gabriel Ibitoye, try scorer for Quins and Jarod Leat who only turned 17 in July for Irish!  An amazing mix of youth and experience! 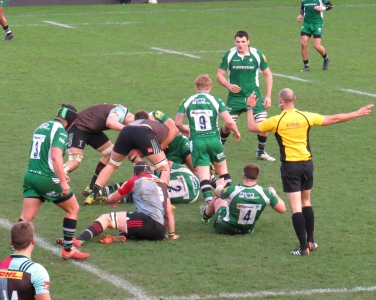 The young London Irish players had taken the win on the 19th, but this game was to go with form in spite of the visitors best efforts.  Harlequins scored 6 tries in all, with Charlie Walker, a player plagued by injuries scoring 2 and having a huge part to play in another! He was joined on the score sheet by Beau Robinson, Robbie Nairn, Archie White and Tito Tebaldi.

Harlequins undoubtably dominated the game, but there were clear positives to take away for London Irish, Connor Murphy impressed at scrum half, at times they put in a great defensive effort.  David Sisi scored a late consolation try leaving the score on Harlequins 34 London Irish 7. 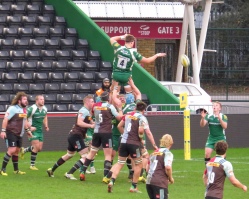 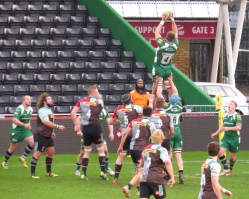 I have to give a mention to Quins No17 Seb Adeniran-Olule – I’m sure he was meant to be a prop – he made several amazing breaks – leaving his backs in his wake! 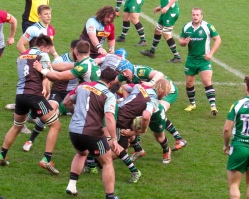 The cost to get into the match was £5.00 I can highly recommend a trip to watch A League rugby! It’s entertaining stuff! 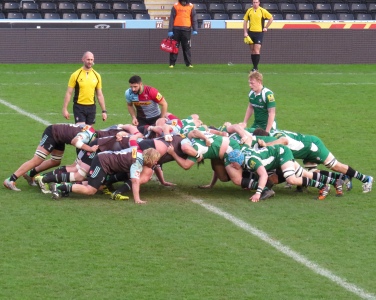