It seems only right that my sporting 2016 starts at Allianz Park watching Saracens, 2015 started at West Ham watching what I’d call one of my ‘fringe’ sports.

As is my way at the start of the year I’m going to make two confessions – I am a Saracens season ticket holder, but I honestly try to be as unbiased as I can be when I’m writing about them.  The 2nd confession?  I’m getting very tired of the ‘boring Saracens’ tag, but I’ll try not to rant here!  I’ll save that for the odd rugby feed on social media!

Saracens went into 2016 unbeaten in this season, I felt that Tigers would be a threat to that position, however it proved not to be the case. 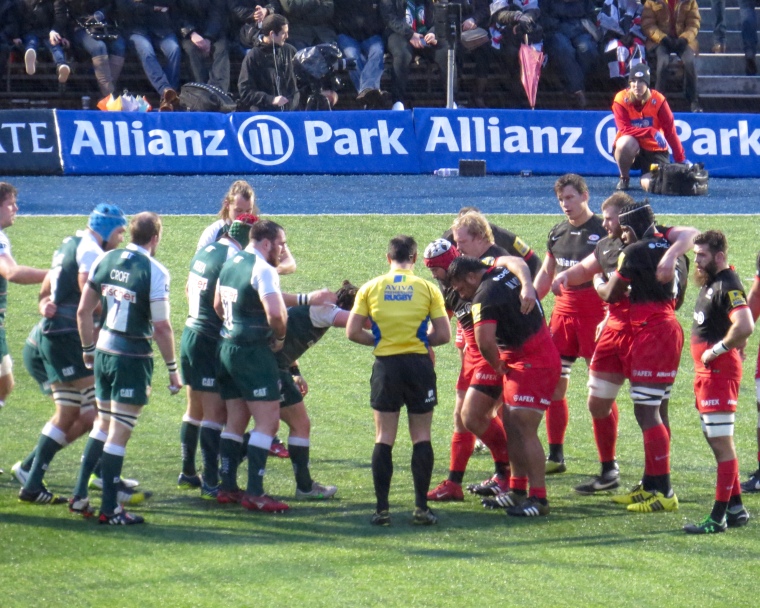 Richard Cockerill had made an ‘interesting’ team selection, with both Youngs brothers and Dan Cole sitting on the bench, perhaps he was looking to bring strength on later in the game?

Marcos Ayerza making his 150th appearance was teamed up in the front row with the relatively inexperienced Harry Thacker and Fraser Balmain, it would be interesting to see how they competed with Mako Vunipola, Schalk Brits and a man having a swan song – Petrus du Plessis.

Brad Barritt led Saracens onto the pitch to the now familiar classical music (I can’t seem to find it online!), it’s very rousing and adds to the feeling of finally having a home. 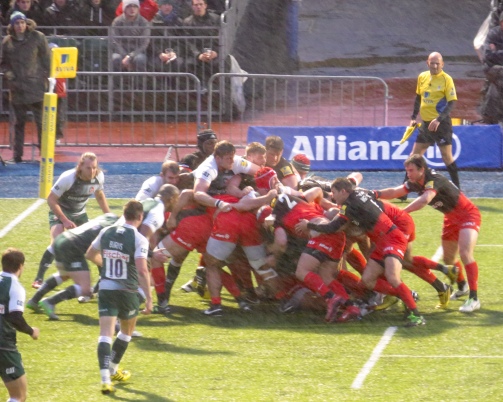 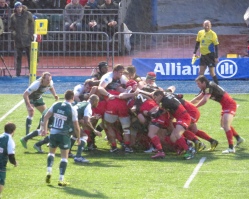 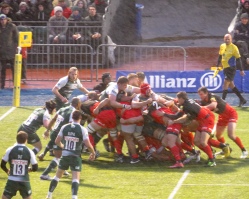 Freddie Burns put a great kick through early on, one that Chris Ashton decided to keep in, I’m not so sure Alex Goode will have been thrilled to receive the ball on his own line, but Richard Wigglesworth did manage to clear the ball, although not far!

Brad Barritt was penalised early on as Tigers made a good job of getting men into the ruck, Lawrence labelled Schalk Brits as the perpetrator but it was clearly the Centre who was at fault.  Freddie Burns made no mistake, putting the visitors ahead.  With 7 minutes on the clock things were going well for Tigers.

The first scrum came and was something of a mess, it was reset with the put in remaining with Tigers; the ball was actually hooked by Thacker and Tigers came away with the ball. While I’m mentioning Thacker he was great to see around the pitch, a small man, it was almost like having 2 scrum halves on the pitch.

Ayerza was penalised, rather harshly on 10 minutes giving Saracens their first real presence in the Tigers half; they went on a huge rolling maul, in fact a 13 man maul storming down the field, Marcelo Bosch took the ball from Brits and touched down, but the referee had already blown his whistle for a penalty try.  I always wonder how the man who loses out on the points feels about that happening?  The weather was pretty atrocious so I’m sure Charlie Hodgson was pleased to have his conversion in front of the posts!

Billy Vunipola showed his growing personality, heading the ball (???) after he clumsily knocked it on, he doesn’t like unforced errors – does any player?  Luckily for him his error didn’t cost his team any points. 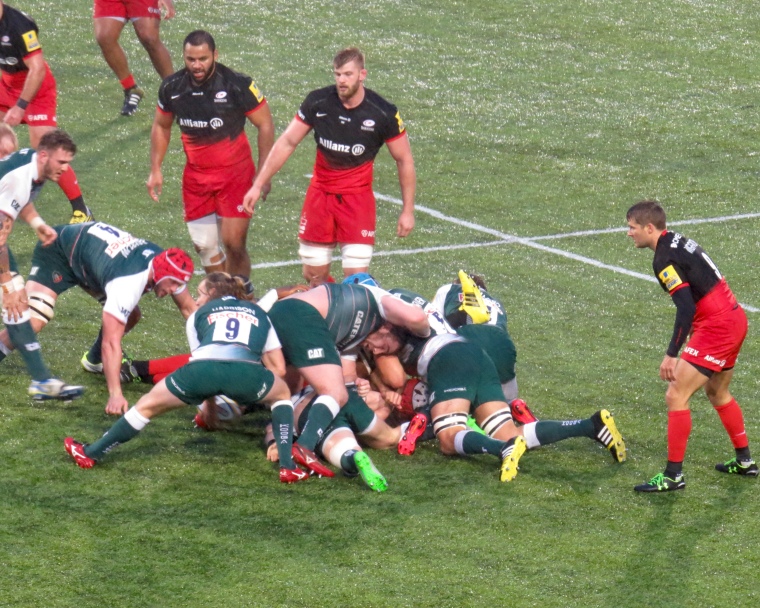 Another scrum, another collapsed mess, Saracens were awarded a penalty as Balmain was pinged for going down as the scrum went back his way. Again, in common with Billy V his team didn’t pay with points.

Now, I’ve mentioned before how at time I seem to be surrounded by moaners at Allianz Park, and wow this game was by no means an exception.  One such moan was when Tigers Fullback Telusa Veainu took a high ball, calling for the mark, I’d say he was just outside the 22, but it was a very tight margin; Veainu made a great clearing kick.

Saracens did that giving a penalty away right in front of the posts thing again, this time George Kruis coming through the ruck illegally.  Burns took his team to within a point.

It was worrying to see Tom Croft leave the field at this point, it was hard to see the reason in the ground, but it’s clear he left with blood running down his face; it was a blood bin replacement but it wasn’t to be reversed.

Both fullbacks showed their dancing feet in quick succession, with Alex Goode showing his heels followed by Veainu showing his silky skills, both were great to behold on a gloomy afternoon.

Tigers suffered another blow on 28 minutes when captain Ed Slater went down injured, his team went on the attack through Gonzalo Camacho so it was a few minutes before he left. Two thirds of the Tigers back row were now out of the game. 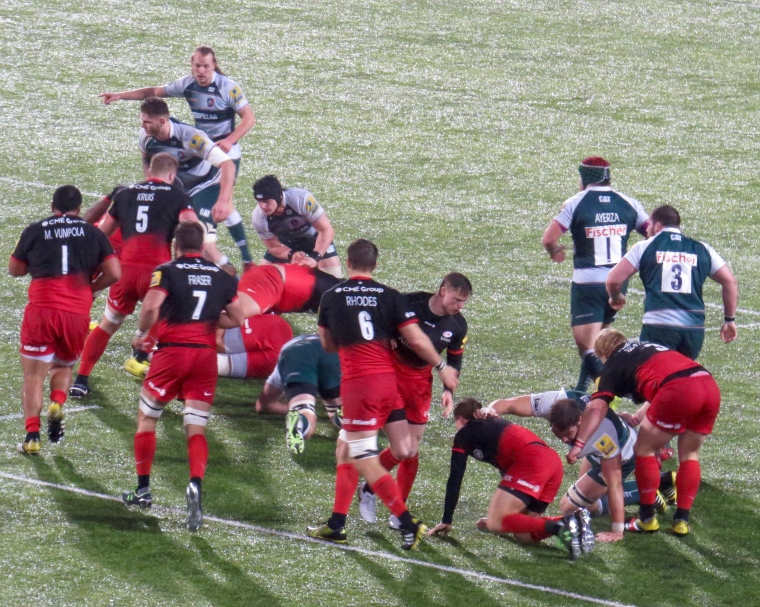 Tigers carried on attacking, with some great passing in midfield, but the final pass flew off the pitch, the pass was forward so we had a scrum rather than a lineout; Saracens won a penalty as Ayerza turned in, to be pinged.

Charlie Hodgson had a kick at goal on 35 minutes after Dom Barrow dived on a ball that did look free, that scenario seems very open to interpretation, in this case it went against the defender.  The penalty was harsh and didn’t result in points as the wind played a part in taking the ball wide of the posts.

A very similar scenario happened moments later when Veainu was penalised, the move he made was virtually the same as the ball taken by Matt Kvesic at Twickenham – that was allowed to run and I believe Gloucester scored a try from the turnover.  Alex Goode took this kick, and similarly missed. It seemed an odd decision to change the kicker after one miss, perhaps Hodgson had an injury?

The teams went in at half time with the scores on Saracens 7 Leicester Tigers 6.

The teams emerged after half time with Jamie George running out for Saracens, Brits had been carrying his leg in the first half, fingers crossed it’s not a serious issue. 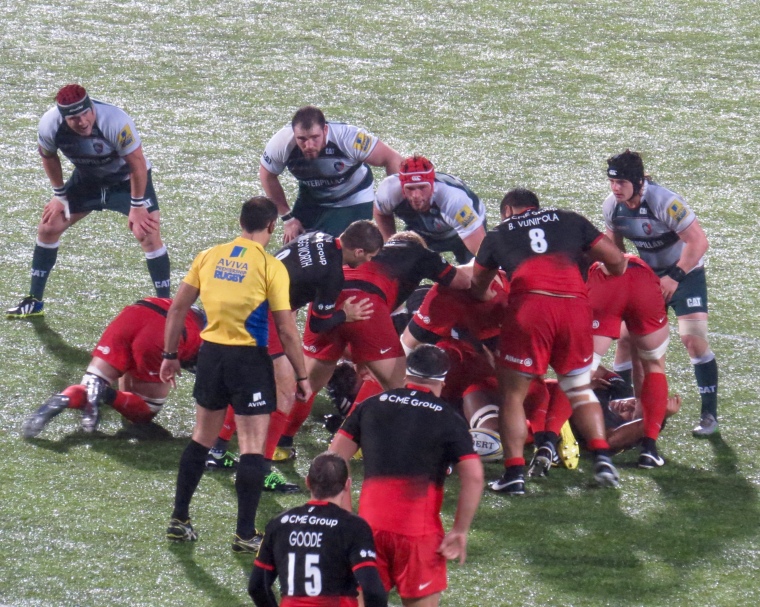 Goode made another great break, he seems to find space where there isn’t any!  Charlie Hodgson kicked the ball though and Veainu had little option than to run the ball into touch.  The lineout gave Saracens the platform they needed to roll the ball over the line, it was substitute George who came up with the ball after he dropped over; not a bad start!  Hodgson was back with kicking duty, but failed to convert.  I’m not sure I agree with Lawrence Dallaglio on 6 points being a healthy lead, but Saracens were to improve that differential.

Saracens fell foul of the kick bouncing off the end of the field problem when Marcelo Bosch put too much power into his kick after Goode had intercepted a pass from Freddie Burns.  I can imagine Burns having a small sigh of relief.

Saracens had a strong attack spell in 5o minutes but were held up over the line, they went back for a penalty and took the option of a scrum.  At this point Tigers swapped their props over, with Dan Cole and Logovi’i Mulipola coming on.  Those changes were to no avail, Saracens pushed over the line and the referee went to his whistle and another penalty try! I clearly have no experience of being a front row forward, or any rugby player come to that, but it always seems very strange to make substitutions at such a key time!

I thought in the ground and I most definitely believe that Tigers were harshly judged not to have kicked 10 from the kick off, it blatantly looked to have gone over the line to me! But a scrum on halfway it was, one Saracens won a penalty from .  One Farrell put in a wonderful kick, one his Dad clearly enjoyed as the cameras found him.  Tigers however turned the ball over, very possibly illegally, but perhaps that made up for earlier decisions.

Saracens were soon back in control however and kicked to touch when they were awarded a penalty, it was pleasing to see them go for the try, they failed to get the try bonus point far too many times in the 2014/2015 season.

The try didn’t come from that move, but the 4th try was to come in controversial circumstances.  Another penalty was awarded – I do have to say cries of ‘off, off, off’ from those around me were getting very tedious! But, the card was to come and inevitably it was to be the result of a collapsed scrum, several penalties and resets saw Dan Cole in receipt of a – go to the naughty step for 10 minutes card – again it always seems odd ti me that we have a card after numerous penalties but no penalty try.  You really would think that was the moment the try was awarded!

Fraser Balmain came back on, and the result was the same, another scrum, another penalty but this time the referee went under the posts.  3 penalty tries given against Leicester Tigers is an amazing feat!  The joy on the faces of the Saracens forwards told the story of the game. 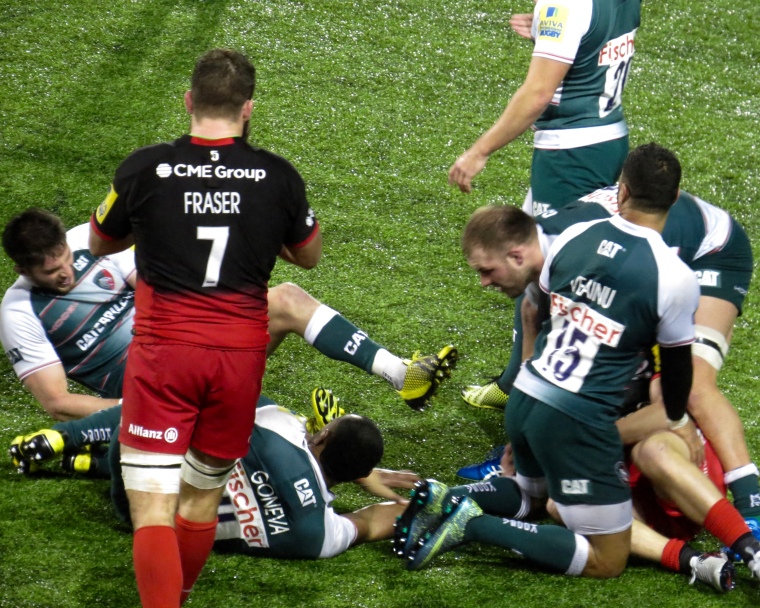 There were 12 minutes remaining, but Saracens ween’t able to capitalise further with an extra man.  I must make mention of one silly moment when Goode leapt for a ball Duncan Taylor was clearly under, they collided, an unusual error by the home team.

The score finished on Saracens 26 Leicester Tigers 6.  Saracens continue their unbeaten run, I suspect the Tigers will have a difficult week in training but will bounce back to cement their place in the Top 4!  It has to be said that Richard Cockerill has been far more gracious in his post match comments than Dai Young after Saracens beat his Wasps.  Is this boring rugby?  Or is it adjusting to the conditions and opposition to get the win?  I know which option I prefer, winning is a habit, one this team seem to have this season!