With my new found freedom I’d made lunch plans for Day 3 of this County Game, which was delightful but also something of a schoolgirl error!  However the joys of living in Chelmsford meant I could get to the ground and watch most of the afternoon session. 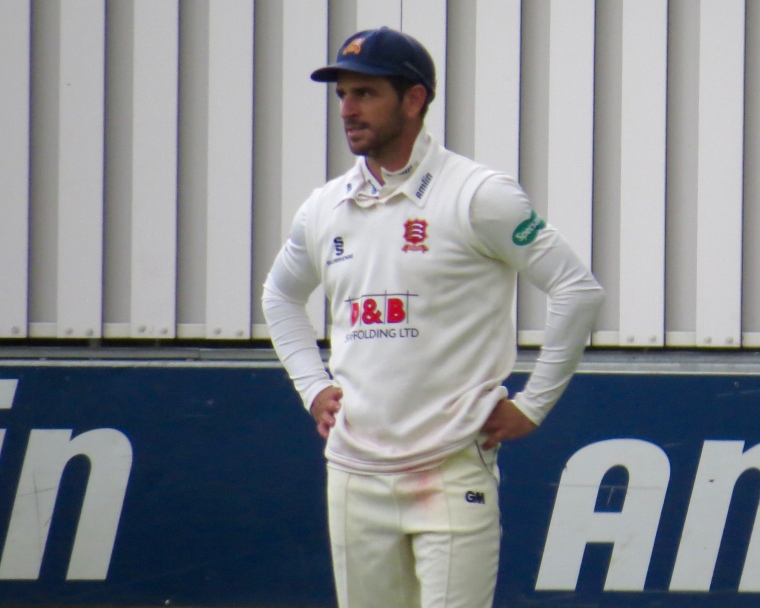 But, a recap of the day as a whole – Essex resumed their innings after a mini collapse on 287 for 6.  James Foster and Graham Napier were at the crease for Essex, both can be handy with the bat and put on 57 before Napier departed for 33 caught by Cameron Bancroft off the bowling of Tom Hampton. 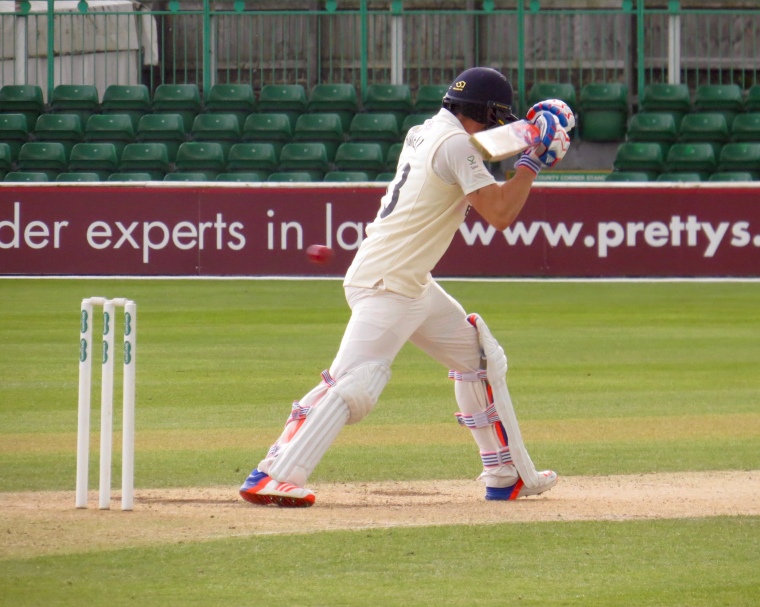 Foster followed Napier into the pavilion in the next over, caught behind by Gareth Roderick from the bowling of Liam Norwell – Essex were now 355 for 9. 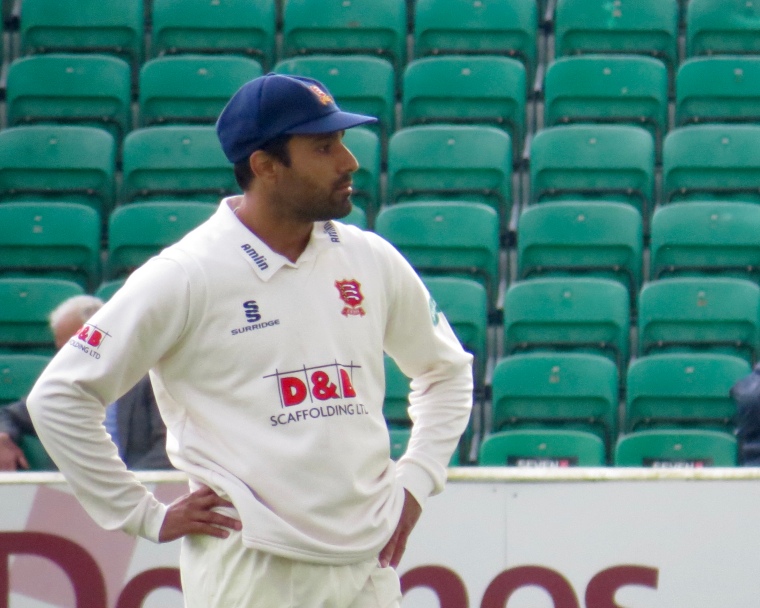 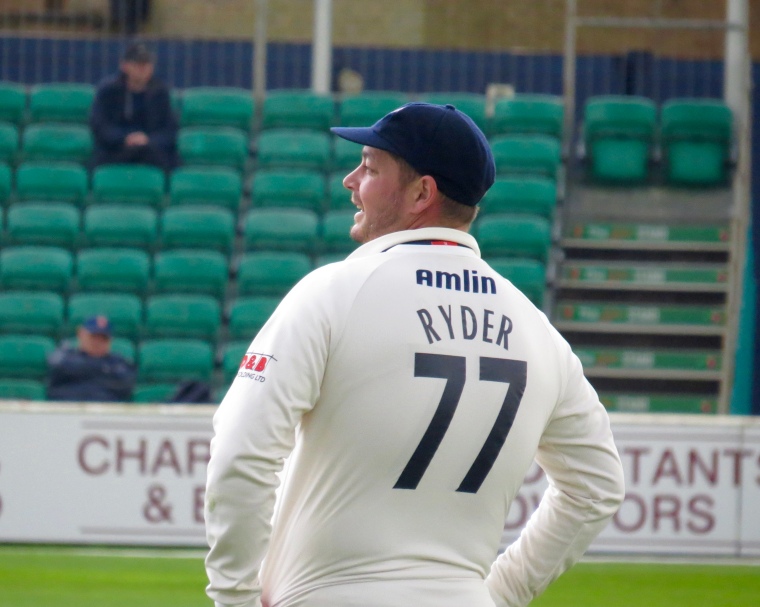 Jamie Porter and Matt Dixon saw out the Essex innings; Dixon was patient lasting 41 balls for his 8 runs before being caught by Chris Dent from the bowling of debutant Josh Shaw.  Porter who is building on his success in 2015 made 20.  All of those runs added together made Essex’s score a very useful 385 All Out. 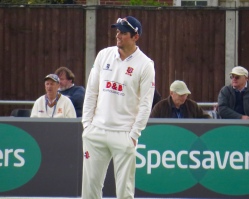 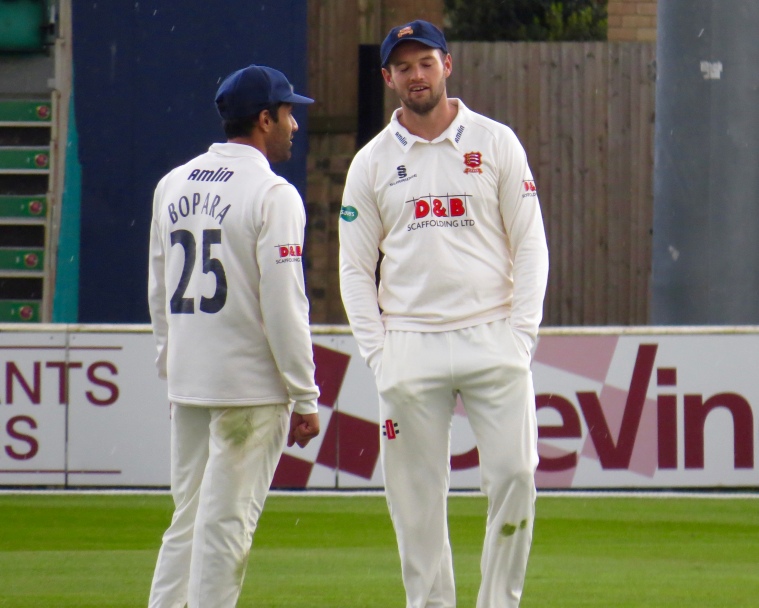 As far as the Gloucestershire bowlers are concerned Josh Shaw took 4 for 118 – non too shoddy in his first County Championship game!  Liam Norwell took 3 for 81 and Jack Taylor of course took the key wickets of Tom Westley and Alastair Cook.  Tom Hampton took a single wicket. 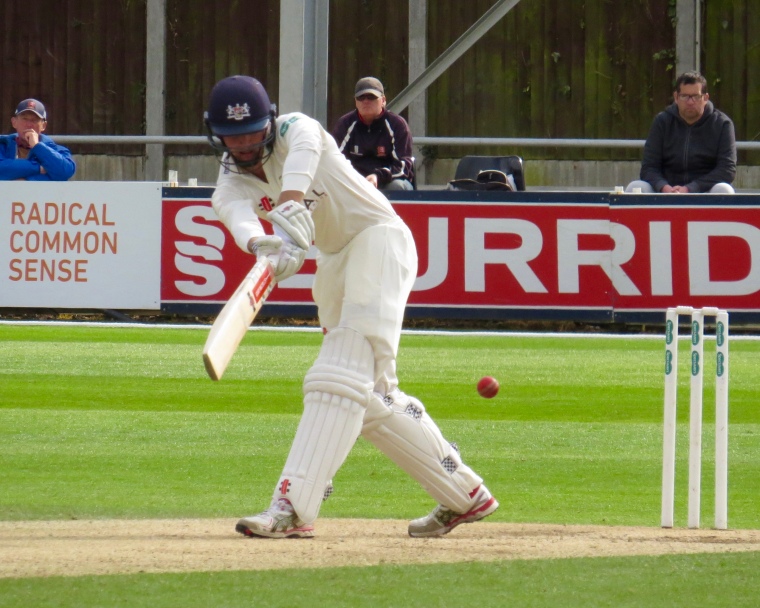 What could Gloucestershire do in their second innings?  To say things didn’t start too well would be something of an understatement! (And I missed all this while stuffing Fish & Chips!) 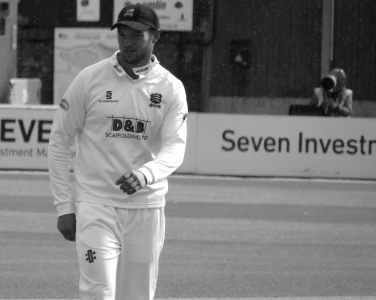 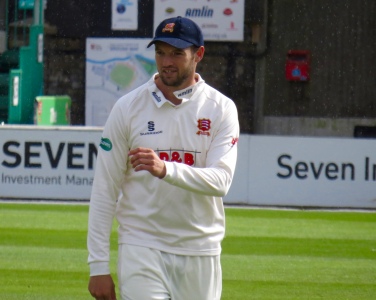 Enter Jamie Porter the bowler – Cameron Bancroft and Chris Dent opened the batting.  To steal a term from football (I think) Bancroft had an early bath – he faced 3 balls and was caught behind by James Foster!  In came Ian Cockbain – then out he went! caught by Foster.  Porter had bowled 4 balls and taken 2 wickets, the visitors were on a disastrous 0 for 2.

Captain Gareth Roderick joined Dent in the middle, but their partnership was to last a mere 8 runs as Dent was caught by Tom Westley, this time Dixon was the bowler. On 8 for 3 it must have seemed that the match would be over very quickly.

However Roderick had other plans.  Hamish Marshall a man who can shine with bat in hand didn’t keep his captain company for long – he was out for a mere 14, with that man Porter hitting his stumps.  Roderick needed a partner to stay with him with his team on 25 for 4. 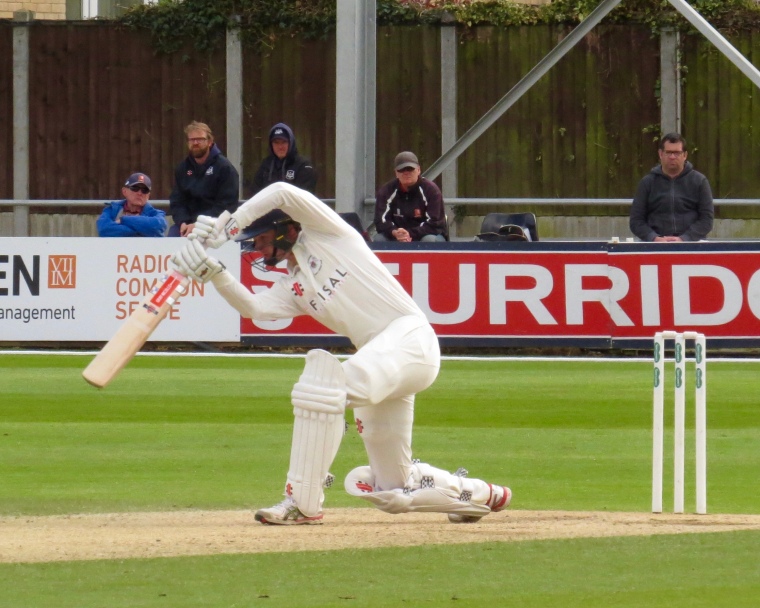 That longer term partner wouldn’t arrive until another couple of wickets had fallen,  Benny Howell and Kieran Noema-Barnett both made 21 before Howell was caught by Essex captain Ryan ten Doeschate from the bowling of Graham Napier.  Noema-Barnett was trapped LBW by Ravi Bopara.  Gloucestershire were on 108 for 6. 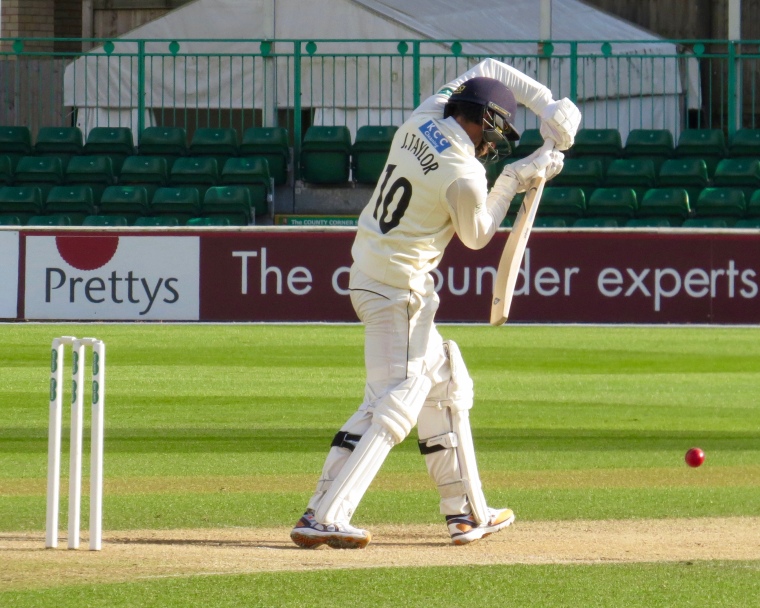 Enter Jack Taylor the bowler who’d taken 2 key wickets in the Essex innings – he and Roderick built a partnership of 65 with some fine batting.  Roderick truly played a captain’s innings making 58 having faced 200 balls, he showed the patience needed to give his team half a chance. 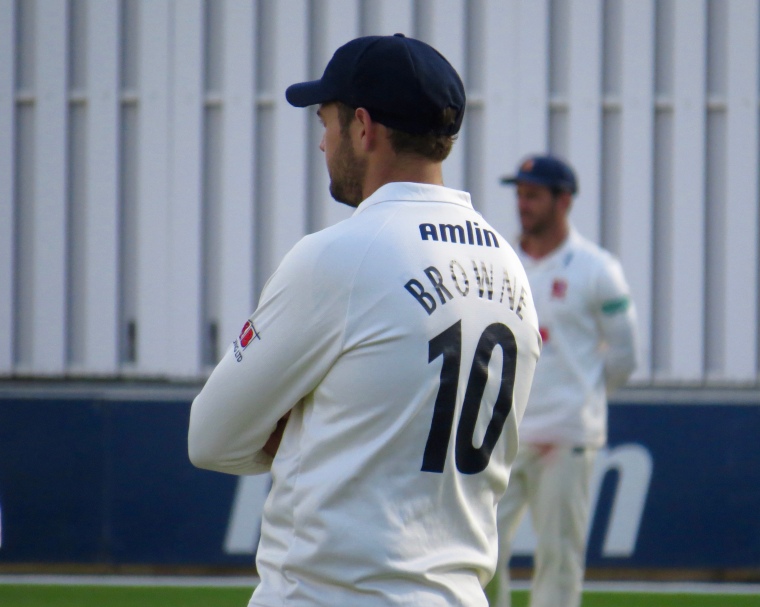 The experienced Napier broke the partnership with a catch made by Alastair Cook, the score had moved on to 173 for 7.

Shaw and Norwell were both out cheaply and the impressive Taylor was the final wicket to fall – he’d made 78 from 94 balls, hitting 7 fours and 5 sixes.  A really enjoyable innings to watch.  Gloucestershire were all out for 215 – not bad at all if you consider the start to their innings!

Jamie Porter ended with figures of 3 for 51, Bopara 3 for 49 and Napier 3 for 36 with Dixon taking the balancing wicket

That left Essex with 93 to score to win the game,  it seemed that the weather wasn’t going to be a problem in spite of the fact that ran had fallen during the Gloucestershire innings.

Here I’m going to straddle 2 days – Nick Browne and Alastair Cook batted with some ease ending the day on 39 and 26 respectively.  With only 59 runs to score on Day 4 that meant a short visit to the ground to see the openers do the job.

Only one could score a half century and this time it was Browne, making a total 0f 55 to Cook’s 35.  Taylor was the pick of the bowlers slowing down the win with a mere 17 runs being hit from his 10 overs. 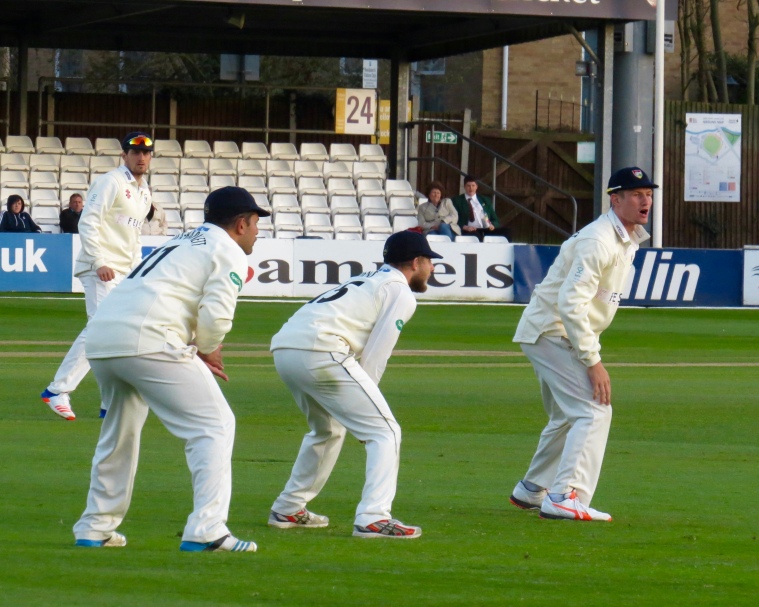 A good start for the home team, they banked 23 points during a ’round’ that saw this being  the only game completed.  Weather really can have a part to play in who succeeds at the end of the season! 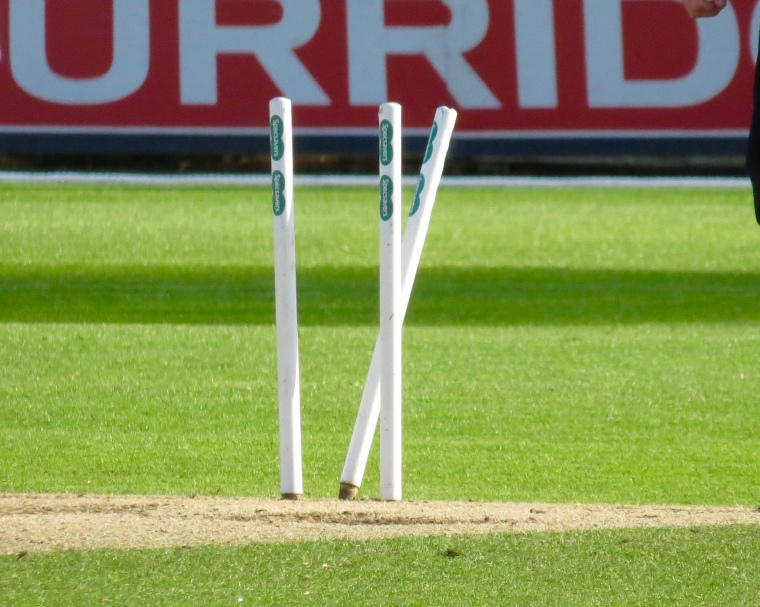