A day out at Wembley beckoned after Saracens booked their place in the European Rugby Champions Cup.  A local derby with London rivals Harlequins; the team who’d put paid to their unbeaten run at The Stoop earlier in the season.  A sweet victory for Quins after 2 forgettable games for them against Saracens in 2015. 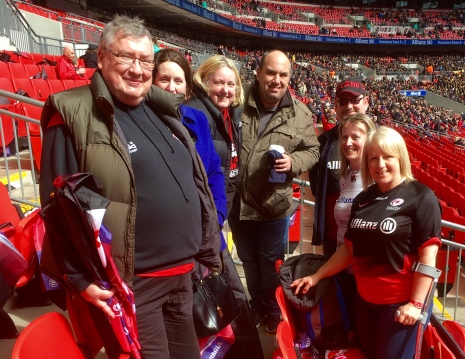 Wembley has become a better place to visit with the introduction of a few restaurants and having organised friends Alun and Sharon meant Frankie & Benny’s was booked for a pre match lunch.  I was, as always late, but it wasn’t too much of a disaster. 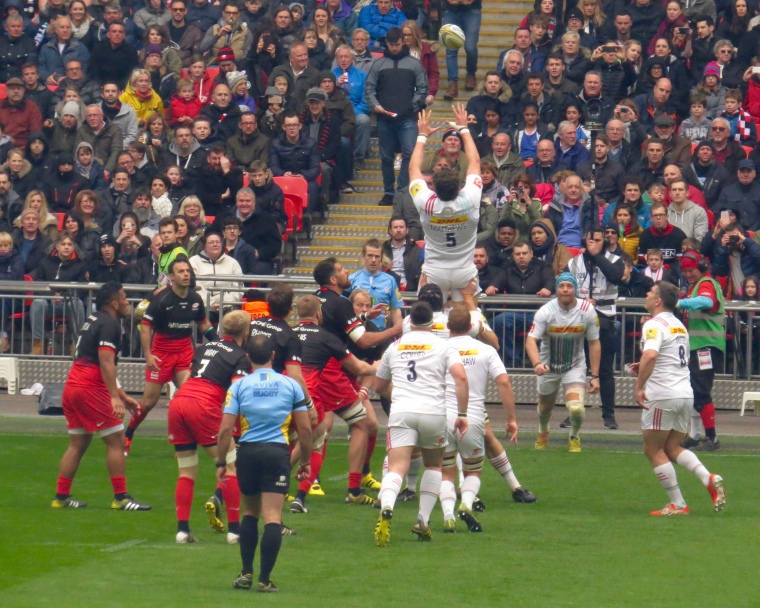 I was I must confess less than impressed with my choice of food, a pulled beef salad with potatoes – it was very light on both beef and potatoes – a bit of a rip off all round really.  Yet the place was packed to the rafters, I think they must be a high profit business.

A group of us had a block of seats which made for a fun afternoon, something really has changed since Saracens made the move to Allianz Park, it’s given the opportunity for real friendships to be formed.

The stadium apparently had over 80,000 people in it, I have to admit I’m less than convinced, I believe the Rock Choir and dancers accounted for a couple of thousand of that number.  Quite awkward when swathes of people left after half time leaving very evident empty seats.  But, I bought my first season ticket after one such game, so it does a job as far as Premiership Rugby is concerned and gives a flagship event for the brand. 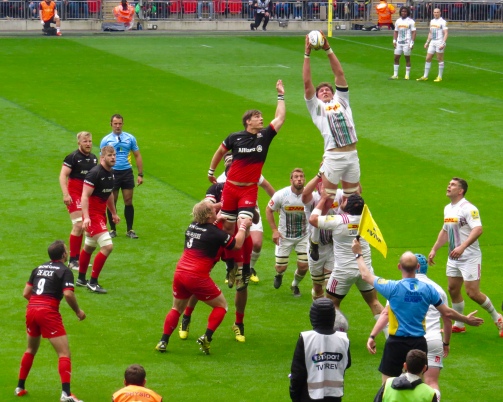 The game however wasn’t a great advert for the game, there seemed to be far too much i the way of whistle, with Saracens in particular falling foul of the referee. With the ‘home’ team conceding 18 penalties to Quins 6! That’s huge differential, but not one Quins were able to take advantage of. 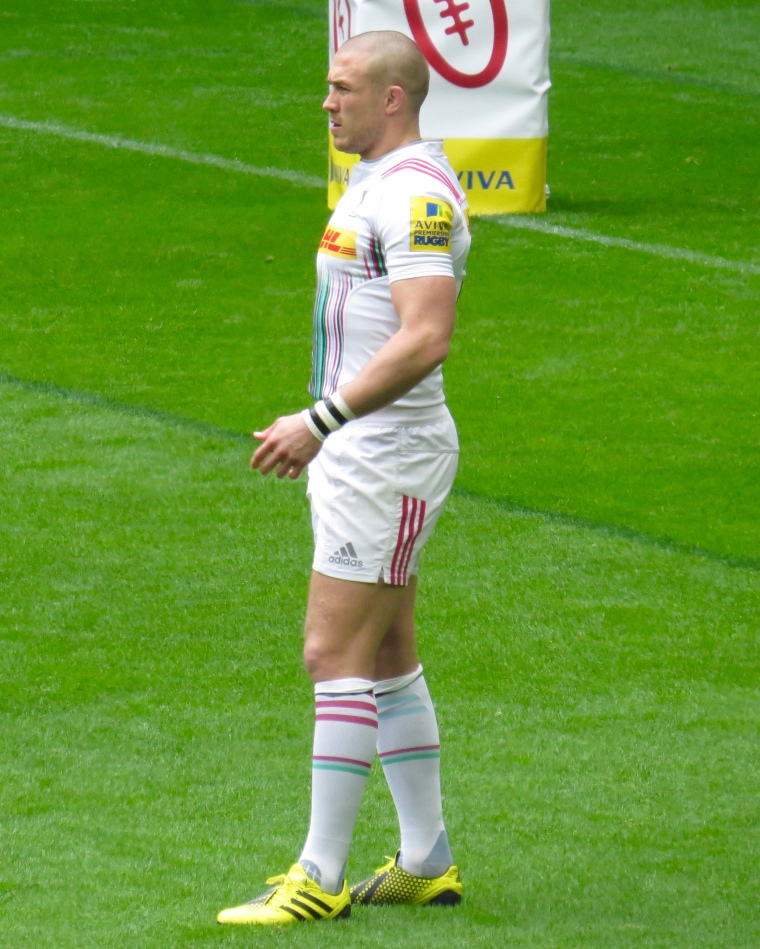 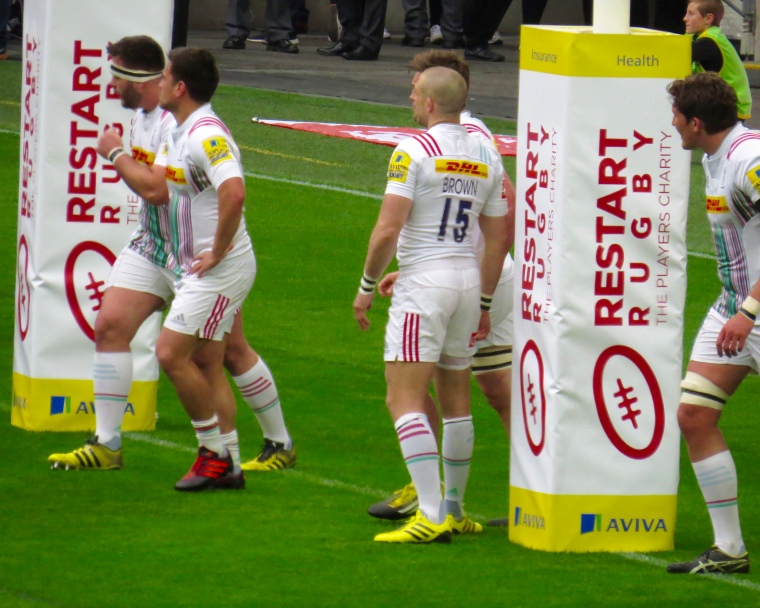 The stats around set plays should have seen the advantage with Quins too, of those that didn’t end in, usually Saracens, being penalised, Quins won 9 to Saracens 1.  That should have given the team from West London a lot of ball to play with!

While I’m on a roll with statistics the one that probably lays the marker for the eventual win by Saracens is the metres carried – 586 metres for Saracens to 274 for Quins.

Quins who can be scintillating with ball in hand really didn’t look close to scoring a try, in spite of one breakaway by Mike Brown, who always runs his blood to water whether he’s in a Quins or England shirt. Marland Yarde had a break later in the game too.  Their total of 12 was through 4 penalties scored by Ben Botica, he missed a vital penalty kick at the end of the game which would have seen his team go home with a bonus point. 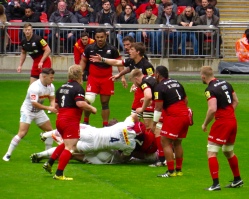 Saracens for all of their errors however did cross the line, the team that’s had the boring tag thrown at them are really anything but as a rule.  Charlie Hodgson made a very welcome return in his 250th Premiership match; an amazing feat that wasn’t announced which I felt was a real shame!  He’s always been class and remains so.

Chris Ashton scored the first of 3 tries, again roaming round the pitch he popped up on the opposite wing to take a great pass from Man of The Match Alex Goode, to go over and score in the corner.  Hodgson missed what was an awkward conversion. 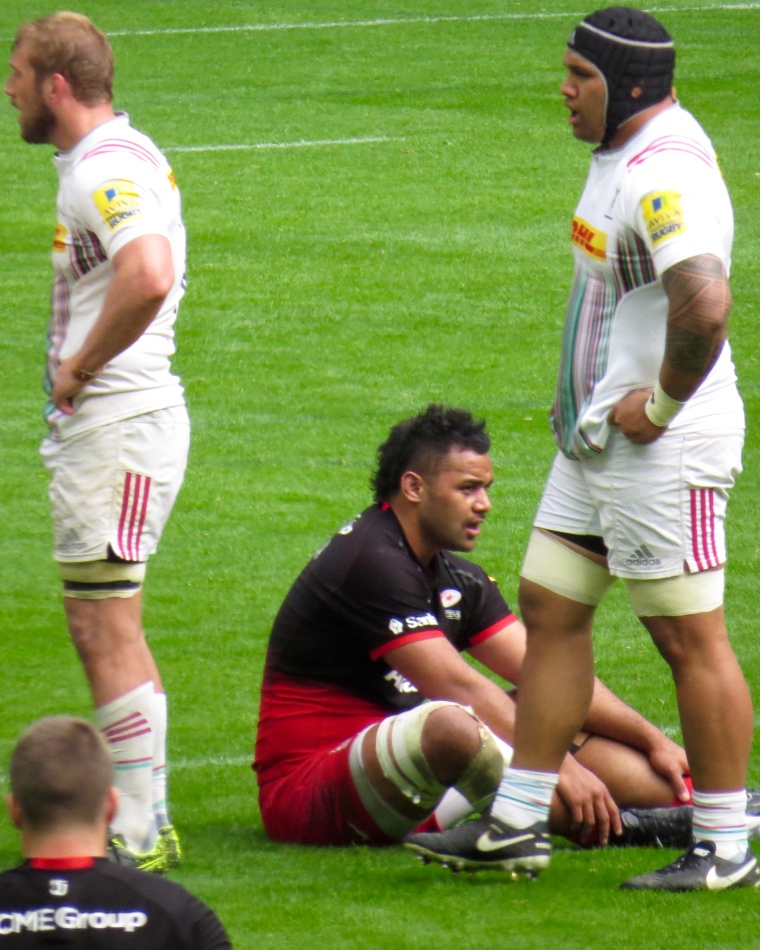 Little and Large collided for Saracens’ second try after Danny Care found himself isolated at the back of a ruck on the Quins line, his England team mate George Kruis took the ball from him to dive over to score.

A superb break by Hooker Schalk Brits before half time saw him break through, running with the ball in hand he almost dropped the ball to Chris Ashton who’d again come into space, he roared over the line under the posts to do his inevitable, and much hated (by non Saracens fans), Ash Splash. 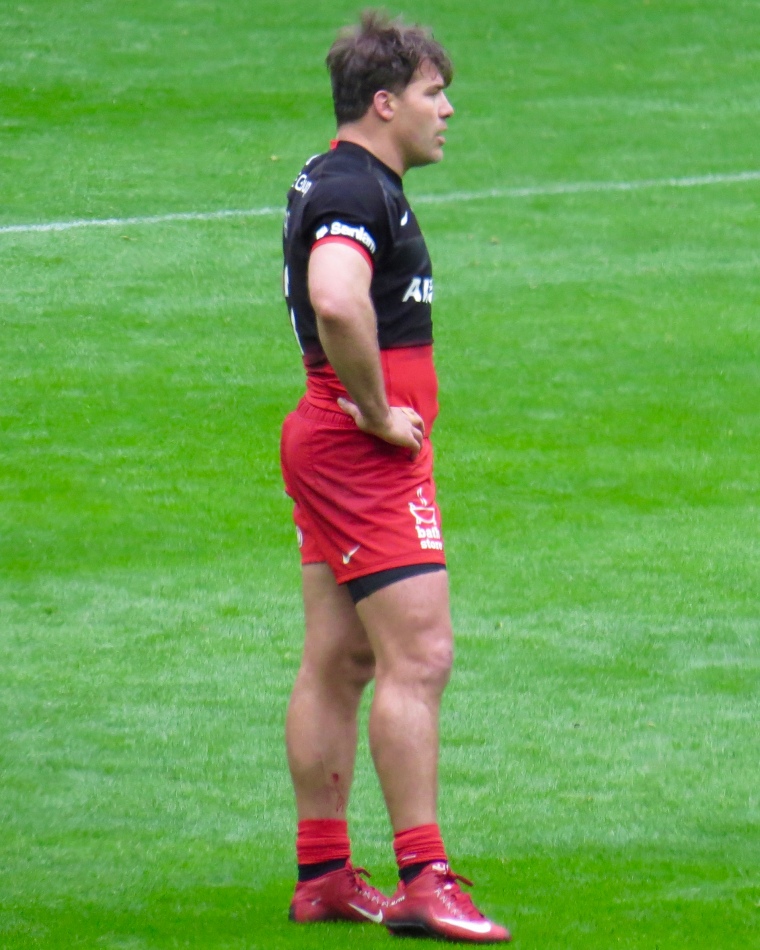 The 3 tries with 2 Hodgson conversions and an Owen Farrell saw Saracens move to 22 points to Quins 12.  A win, but not a convincing one, with Wasps looming in the Champions Cup semi-final a lot of work will be needed during the week to reduce the penalty count in particular! 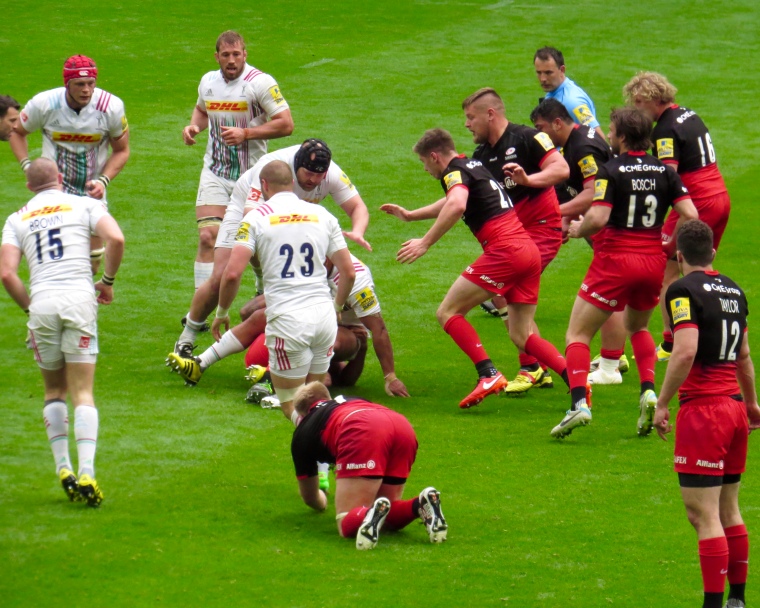 Leaving the stadium was less than perfect, having the event finishing at the Arena at much the same time was bad planning on the part of the venues.  But, a good afternoon was had in spite of the time it took to get away.