And so the Superstars of India Cricket arrived at the Cloudfm County Ground in Chelmsford to play a warm up match against Essex.  The game was due to be played […]

And so the Superstars of India Cricket arrived at the Cloudfm County Ground in Chelmsford to play a warm up match against Essex.  The game was due to be played over 4 days but that was reduced to 3 once the visitors had arrived in town.  Hugely disappointing for those who’d planned to come along on Day 4, the Saturday.

Essex have been lucky enough to host several of England’s Test opponents in recent years and as a rule, no matter who wins the toss the visitors bat.  Virat Kohli won the toss, and……………….. elected to bat!  Hurrah!  We’d be seeing some top class batsmen at the crease, not least Kohli himself. 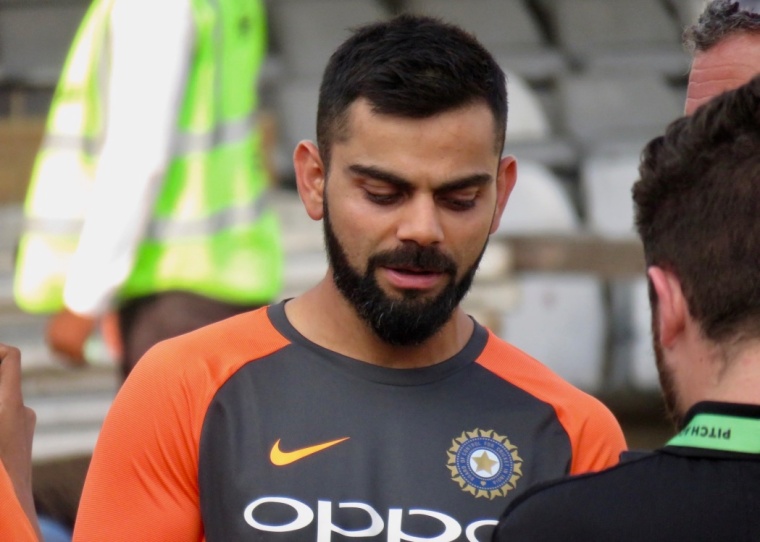 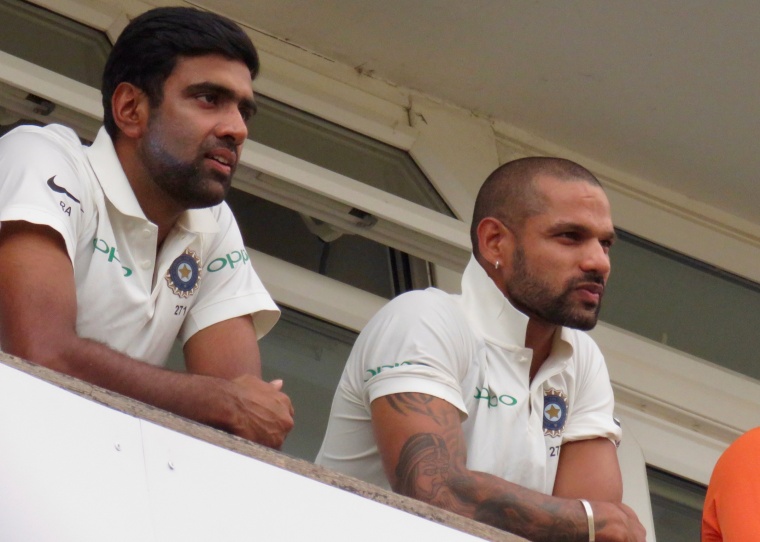 Shikhar Dhawan opened with Murali Vijay, Rohit Sharma isn’t in the test squad, which came as a surprise to me after his performances against England, but I’m told he isn’t a good player against a red ball, so we’d see what Vijay could do.

I enjoy watching Shikhar Dhawan bat but Matt Coles had a great start and despatched him for a Duck, he was caught by James Foster, I managed to capture the ball heading towards Foster’s gloves but not the dive to take the ball! 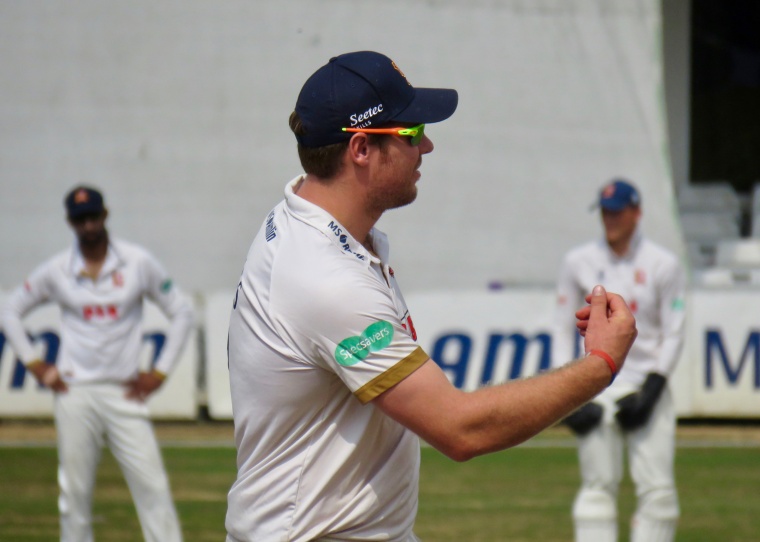 Cheteshwar Pujara was in at 3, but he was soon walking back to the pavilion after being out the same way as Dhawan.  He’s scored 1 and India were 5 for 2, as far as batting practice was going, this wasn’t going too well!

Ajinkya Rahane joined Vijay, India needed a partnership but the pair made only 39 before Foster took his 3rd catch, this time from the bowling of Matt Quinn and Rahane who’d been successful in England when India last toured was out.  Foster was back in the Essex team after being in Canada as one of the coaches in their Global T20 competition, his team the Vancouver Knights won the tournament.  And he was back in the Essex team with a bang! 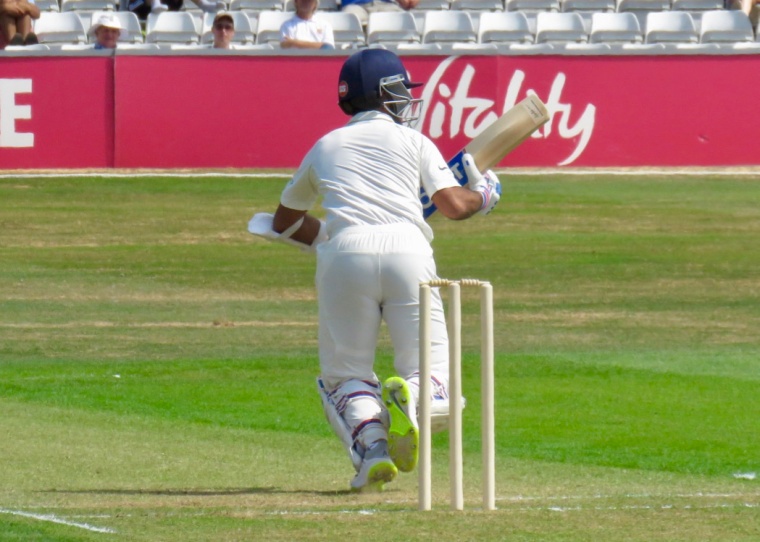 Rahane a pocket rocket standing at 5ft 5 had made 17 from 47 balls, a patient innings.  Vijay was playing a perfect openers innings and was joined by one of the best batsmen in the world, Virat Kohli. 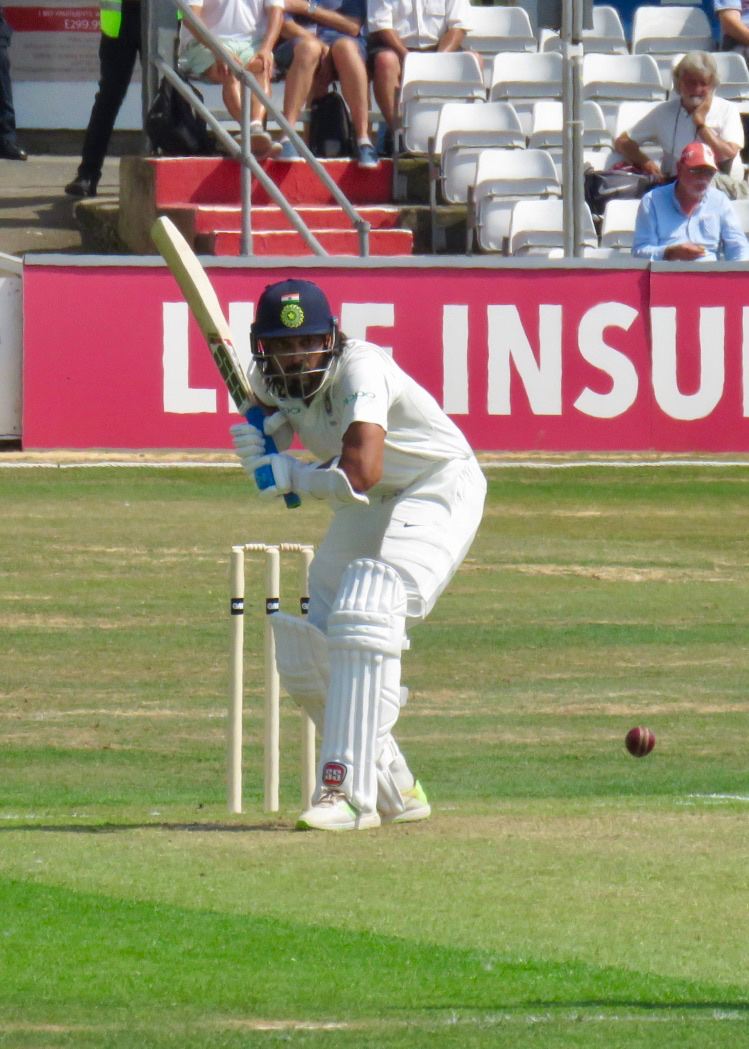 This was a partnership that flourished, but the Essex bowlers kept things in some control , several catches were spilled by the slips, they appeared to have the England problem to me,  they seemed to be standing too close to each other. 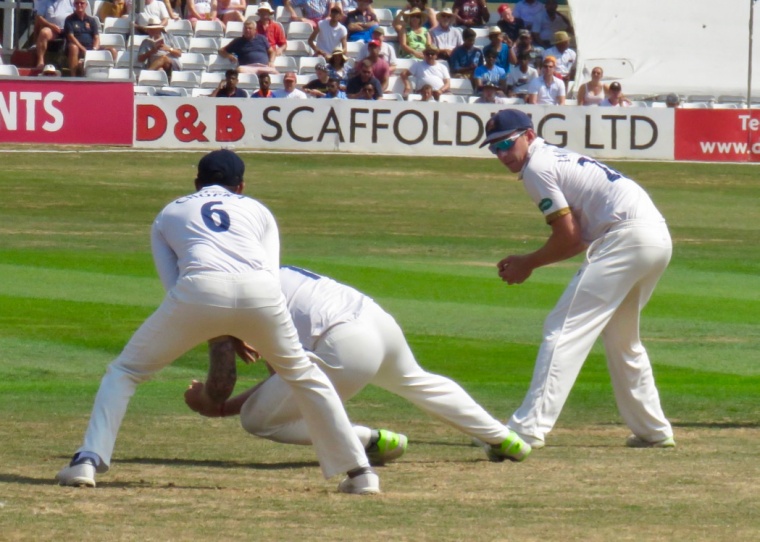 Matt Coles won’t thank me for capturing his drop 😦

Both Vijay and Kohli reached their half centuries, such landmarks aren’t celebrated in a big way anymore, a small bat lift round the ground and that’s it. 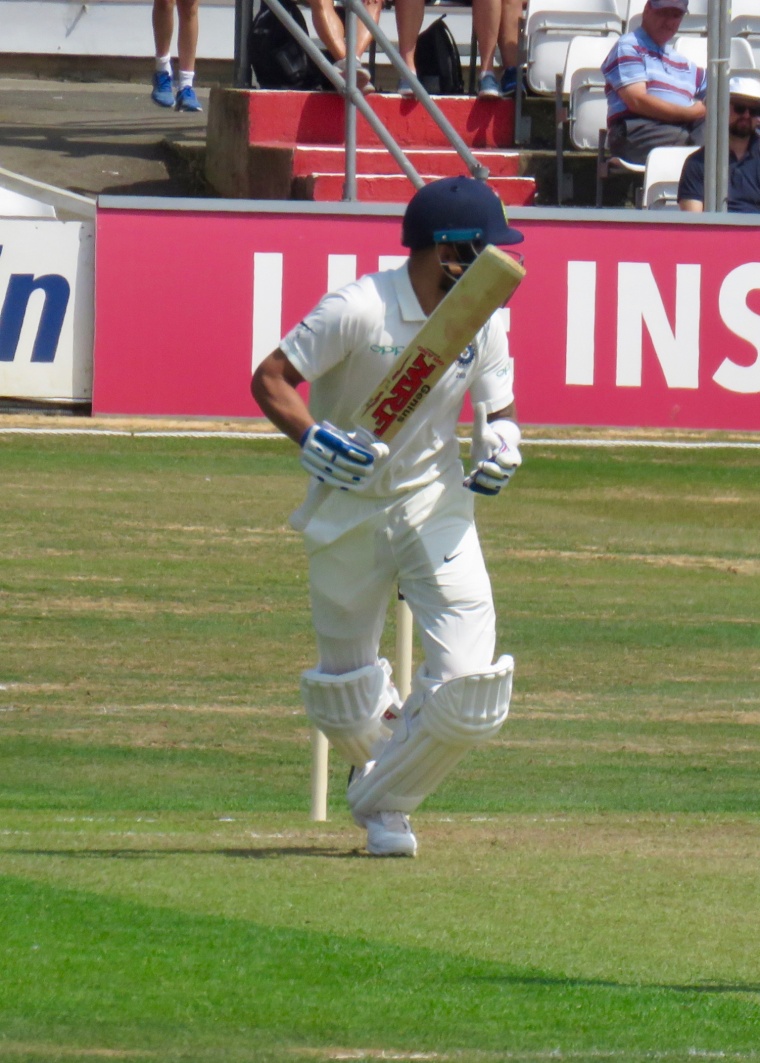 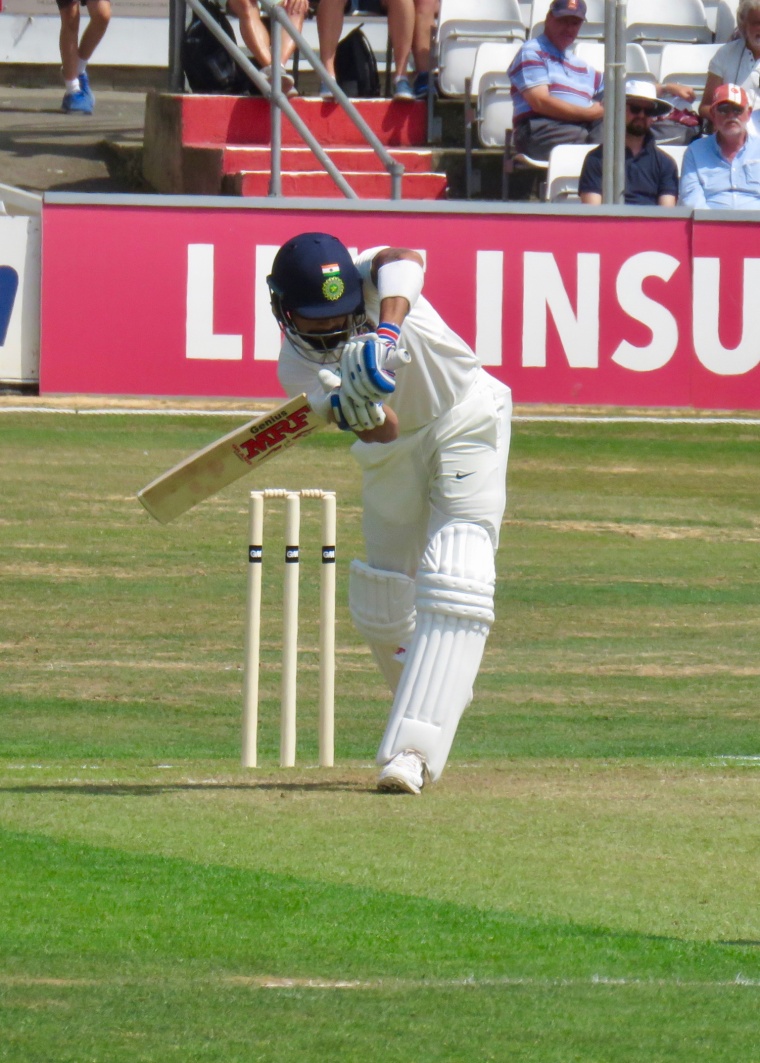 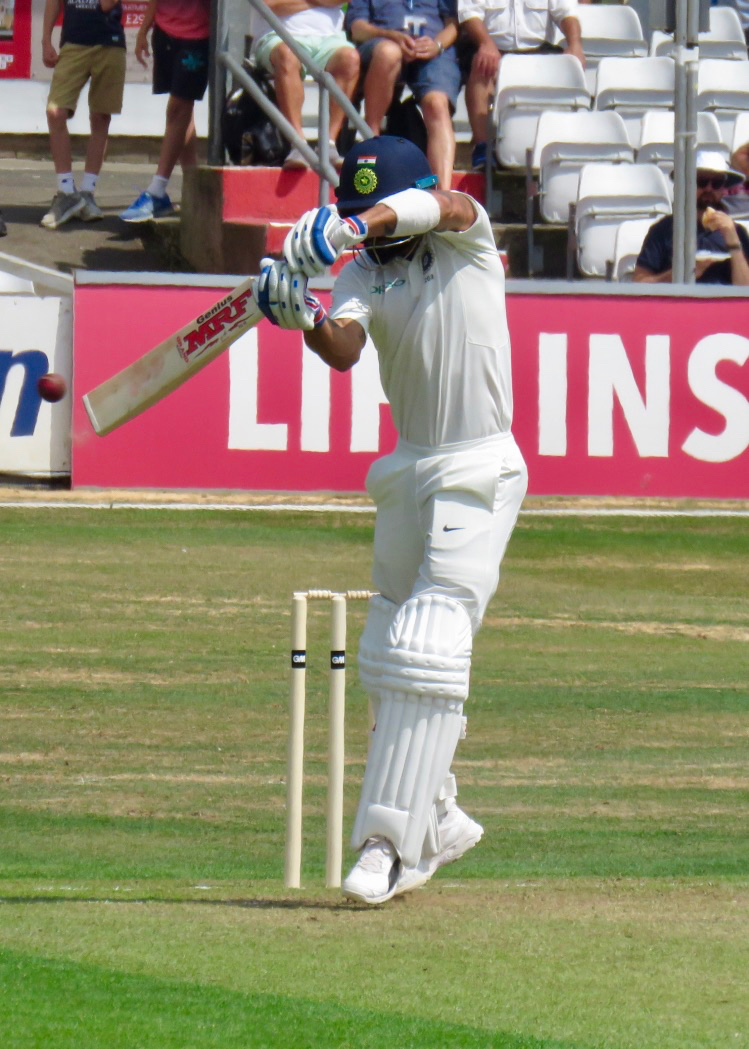 Paul Walter who’s been raising a storm in the second XI took the next wicket, he bowled Vijay, who’d made 53 from 113 balls.  India were 134 for 4 the pair had put on 90.  Every time a wicket fell the scoreboard said Ravi Ashwin was next in, and this was no exception, but no, again it wasn’t him.  KL Rahul joined Kohli. 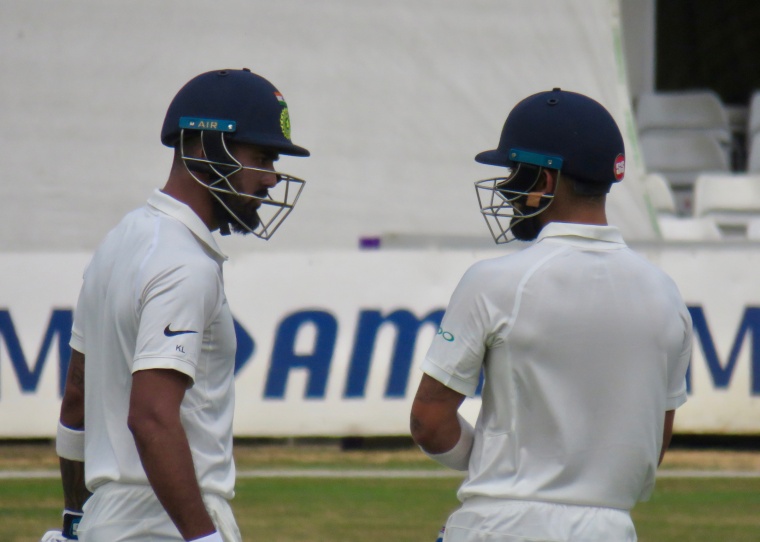 Walter had been sending down some challenging balls, and an audible edge from Virat Kohli stuck in Varun Chopra’s hands, he had the bog scalp for the match against his name  in the score book!  Virat Kohli had scored 68 from 93 balls, an innings many came to see.

Dinesh Karthik, not Ashwin, was next in, this was a player I’d never seen and he certainly impressed.  He and Rahul took everything Essex could throw at them, we were seeing bowlers who haven’t featured for the first team at all in some cases this summer.  All of them fared well against this world class batting line up.

The captain for the match, Tom Westley was using his bowlers well, my neighbour, Bob made a very interesting point as we watched, it took an age to get the ball back to the bowler each time, usually a while after he’s reached his mark.  Halting momentum and taking time out of the game.  I’m going to make note of the time it takes during the Test matches to come.

Karthik and Rahul batted together for 23 overs, putting on 114 runs.  Both played some nice cricket, Rahul was however caught out by the young spinner Nijjar, he skied a ball which was caught by Matt Dixon.  Rahul had scored 58 from 92 balls and India had moved to 261 for 6. (more photos to be added)

Ashwin was announced on the scoreboard, Hardik Pandya came in to bat, a dynamic all rounder, he proved that he can adjust his style against a red ball.  The day finished at 6pm, Pandya had scored 33 from 58 balls and Karthik was on 82 from 94 balls.  India were on 322 for 6.  We continue in the morning.

I need to edit more photos but I have to include this one of Essex’s Nick Browne, what a delight to see him back at the County Ground and with such a big smile on his face! 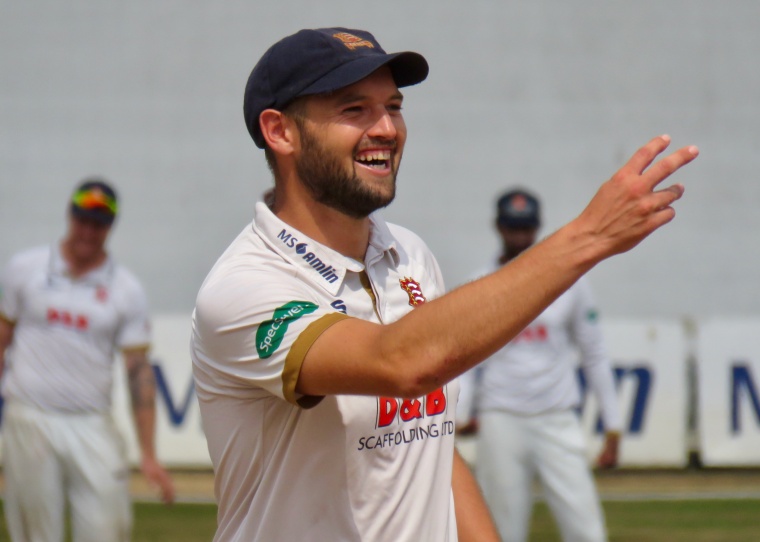