Right, let’s see how this internet works this evening, hopefully it won’t make me want to throw my laptop out the window! Tomorrow I go home so should be back […]

Right, let’s see how this internet works this evening, hopefully it won’t make me want to throw my laptop out the window! Tomorrow I go home so should be back to normal wi-fi wise, but until then, here I go! I’m not even going to try to add photos here, I’ll do that at home.

Day 4 of this test match started with Sam Curran and Stuart Broad at the crease. England were 260 for 8 and looking to increase their lead of 233.  Curran and Broad had put on 63 runs in the first innings, that would do nicely!  The first ball of the day from Shamihowever put paid to that idea, Broad edged the ball to Pant and he was gone for a Golden Duck.  2 wickets in 2 balls, albeit with a nights sleep in between for the second time in this test match for Shami. 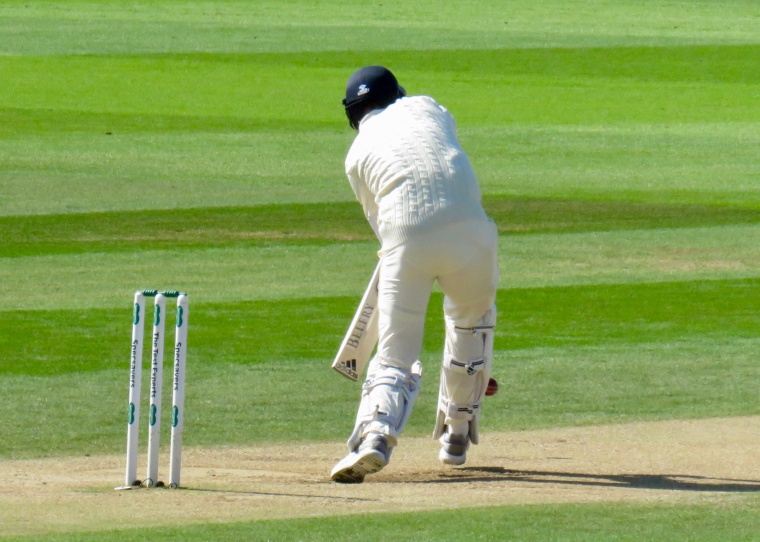 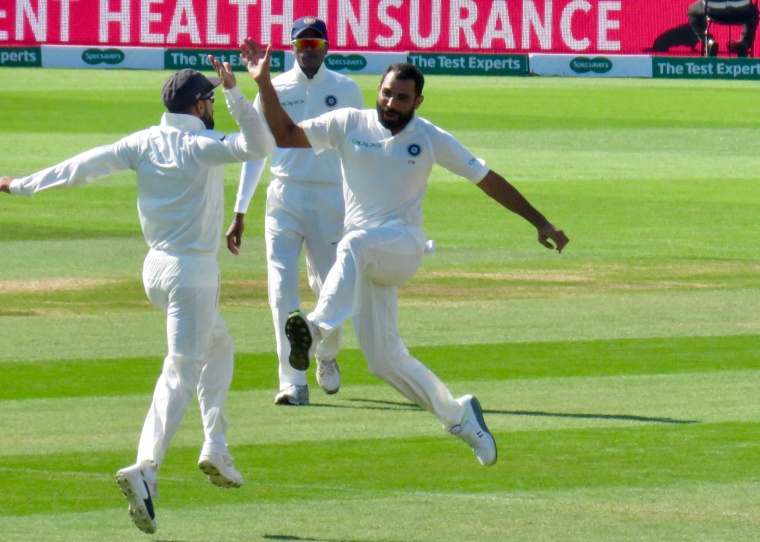 So, a partnership of 0 this time, what could Jimmy Anderson do?   Well, basically he could run Sam Curran out, that may be a bit harsh, Ishant Sharma actually threw the ball that ran Curran out.  He dived, but was out by a mile.  England had added only 11 runs to give themselves a lead of 244.  Could the England bowlers defend that total? 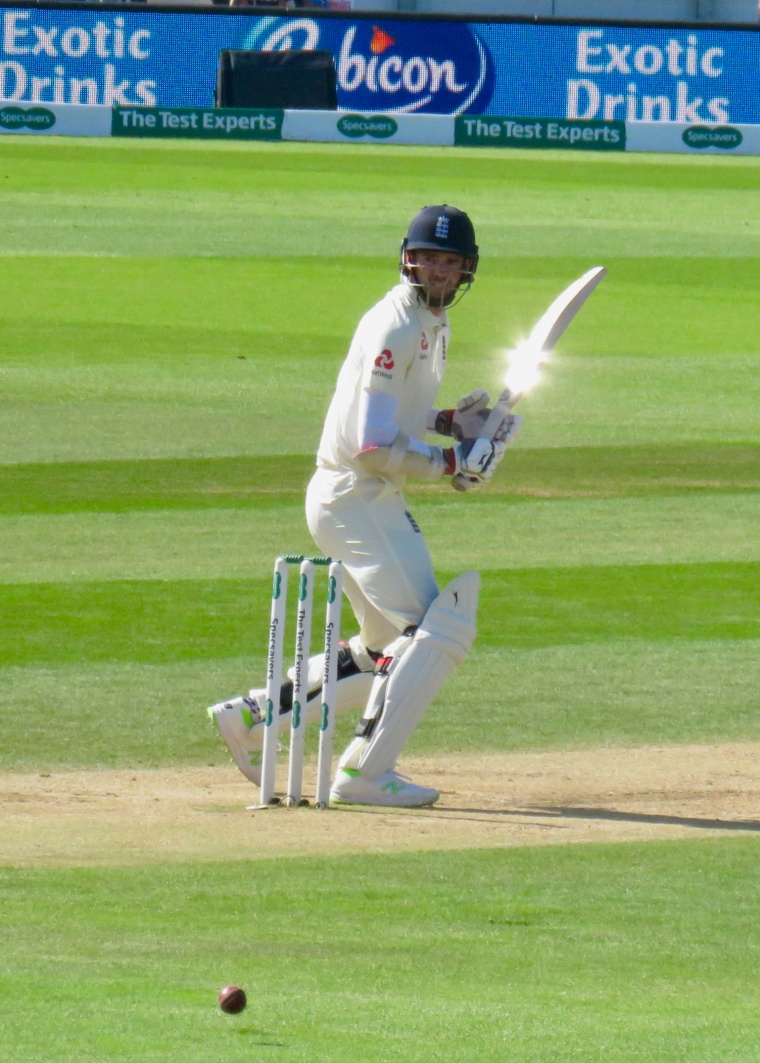 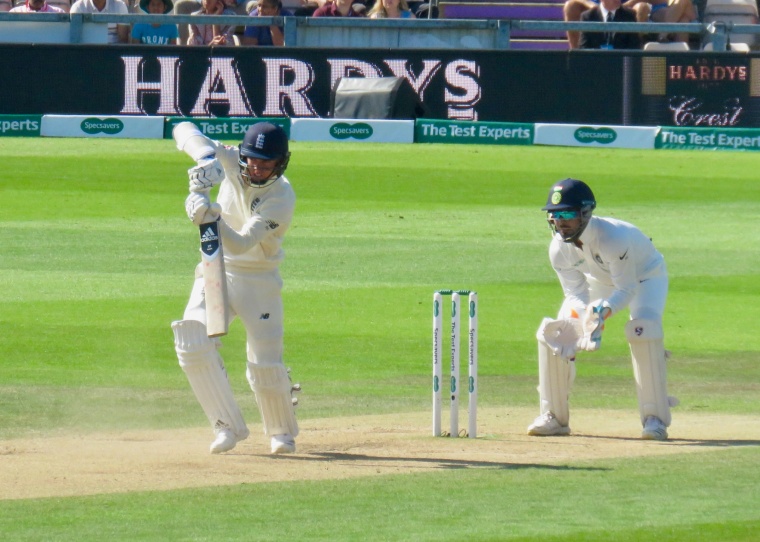 I just can’t believe that with the thousands of photos I take at test matches I yet again missed bails flying as a Stuart Broad ball went crashing into KL Rahul’s stumps, having caught the bottom of his bat.  Rahul was gone for a Duck, reducing his average for the series so far to 14, and India were 4 for 1 in their 4th over.

Pujara who’d scored a quite wonderful century in India’s first innings joined Shikhar Dhawan.  Unusually Jimmy Anderson hadn’t taken any wickets in the first innings, he looked a little out of sorts, bowling only 18 overs.  It was highly unlikely that Jimmy would go wicketless again.  He trapped Pujara LBW for just 5 and India were 17 for 2.

Shikhar had been dropped for Lord’s, a fact I’m sure he’s not too unhappy with in retrospect, he had an average of just under 26 going into this innings, the highest of the openers from both teams.  But, a ball from Anderson had his name on it, a great diving catch from Ben Stokes and Shikhar was out for 17.  India were in some trouble on 22 for 3.

One positive I hadn’t picked out amongst my moans from Day 1 is the fact that our best catchers were in the slips or thereabouts for this game, it only took 3 games of dropped catches for the penny to drop, but drop it did, phew!

Virat Kolli has been immense in 2018 in England, he was joined by Ajinkya Rahane a more than accomplished batsman.  The two batted and battled well together, we saw another test match partnership as they made steady progress towards the 245 they needed to win those game and keep their team in the series.

Kohli survived an LBW appeal, which by rights should have seen him out.  The third umpire deemed that his bat had hit the ball, in spite of the fact that there was light between the ball and the bat at the point that snicko showed a noise.  Hot Spot would surely have shown that the noise wasn’t from bat against ball. 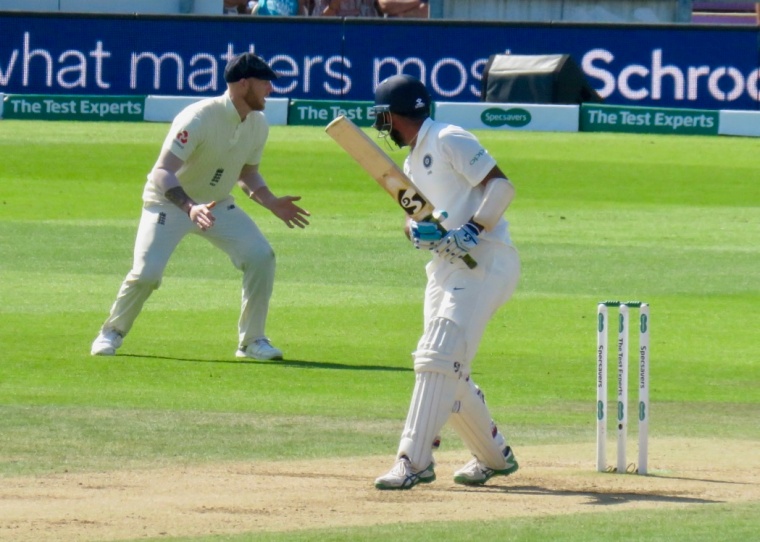 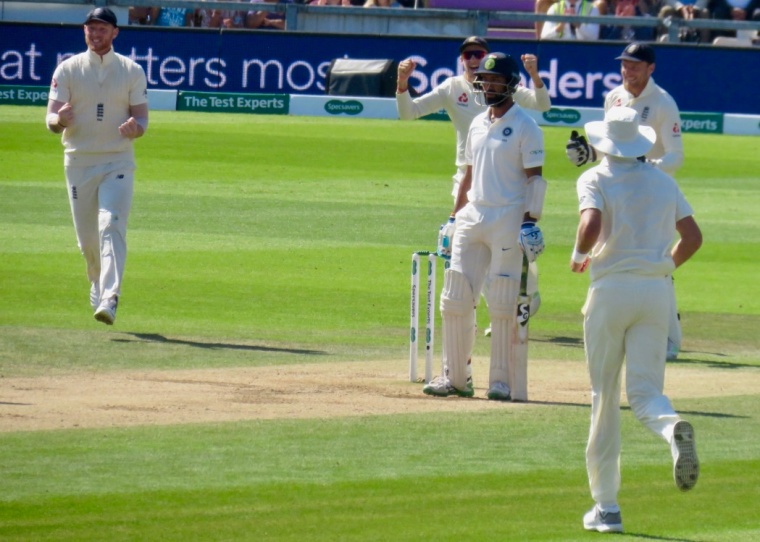 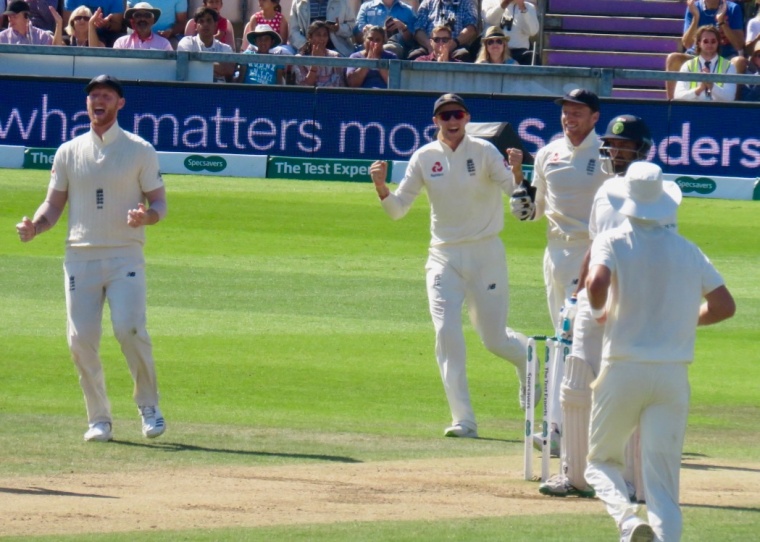 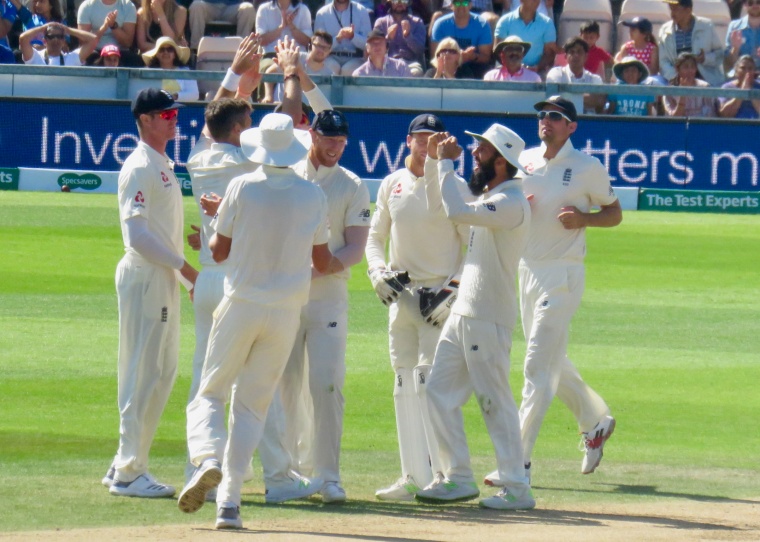 These things happen and the captain was able to carry on, the decision wasn’t a match decider in the end.  Kohli faced 130 balls and batted for 170 minutes making 58 runs, hitting just 4 Fours.  He hit a ball hard at Alastair Cook from the bowling of Moeen Ali,  it was a very difficult chance and one not take.  A couple of balls later the ball went up in the air to Cook and he caught it cleanly.  Kohli reviewed the decision to no avail.  He and Rahane had put on 101 runs and India were therefore 123 for 4, not figures you see on a scoreboard that often. 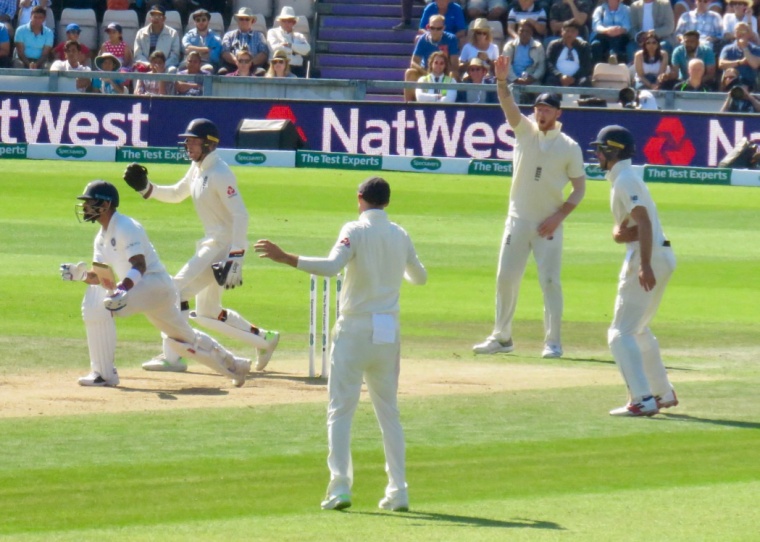 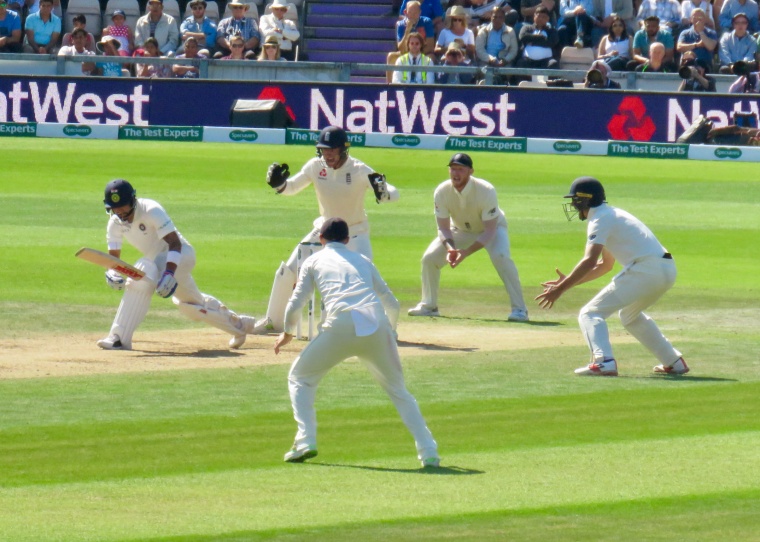 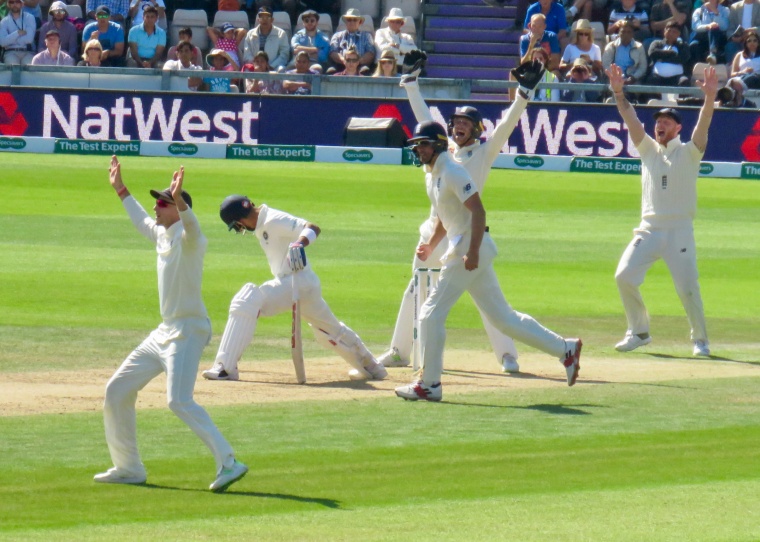 Hardik Pandya came in to join Rahane, he suffered the disappointment of a pair of Ducks when he was caught by Joe Root from the bowling of Ben Stokes.  That subject caused some hilarity in BBC TMS when Aggers discovered that Geoff Boycott had suffered the same fate and he hadn’t.  He’s so good at winding Boycott up and had ideal material with this one!

Rishabh Pant was next in, he wasn’t likely to be playing a patient innings, this is a man who opened his international batting account with a Six!  He was in the mood for swinging his bat, and we saw another mighty Six,  and 2 Fours.  He tried to whack one too many balls from Moeen however and Cook took a great catch to despatch him for 18. India were now 150 for 6, still needing 95 runs.

There wasn’t much in the way of batting left to come, however Ravi Ashwin is no mug with a bat in hand.  Rahane’s was now the key wicket, he’d batted incredibly patiently, scoring 51 runs, facing 159 balls while at the crease for 207 minutes, he’d hit just 1 Four.  He was edging India towards the required total a run at a time.

Moeen was on a roll however and he trapped Rahane LBW, England were 153 for 7, could Ashwin marshal the lower order to victory?

Ishant Sharma lasted only 5 balls before he was deemed to be LBW to a ball from Ben Stokes, with no reviews remaining he had no choice than to walk, he was out for a Duck. Mohammed Shami faced 11 balls in 11 minutes, scoring 8, before he was caught by Anderson from the bowling of Moeen.  That gave Moeen 4 for the innings and 9 for the match.

It seems only right that it be Sam Curran who took Indias final wicket, Ashwin had batted gallantly for 55 minutes making 25 before he was judged to be LBW.  India were all out and England had won this test by 60 runs and the series by 3 to 1 with one test remaining.

Moeen was named Man of the Match for his 9 wickets and 40 key runs in England’s first innings, Virat Kohli was magnanimous in defeat, giving a special mention to Sam Curran.

This test match at The Ageas Bowl has been a triumph both for the game and the venue, it seems ridiculous that they won’t be hosting a test match in the next 5 years.  The setting and facilities are a perfect place to introduce children and newcomers to this long version of the game.  I’ve had a wonderful 4 days, thank you England, India and the Ageas Bowl!