Harlequins literally stop the Champions in their tracks

A trip to the Stoop means lunch at Patisserie Valerie with my Quins friends Sue and Henry, aiming for 12:30 a nightmare journey from Essex thanks to my rather inept SatNav, which basically gave me a magical mystery tour of West London, I arrived half an hour late.  That was no drama however and a very nice lunch was ordered and consumed.  Sue wasn’t feeling confident about her team Harlequins chances against Saracens, their fortunes had been rather different at the start of the season.  I was of the let’s wait and see frame of mind. 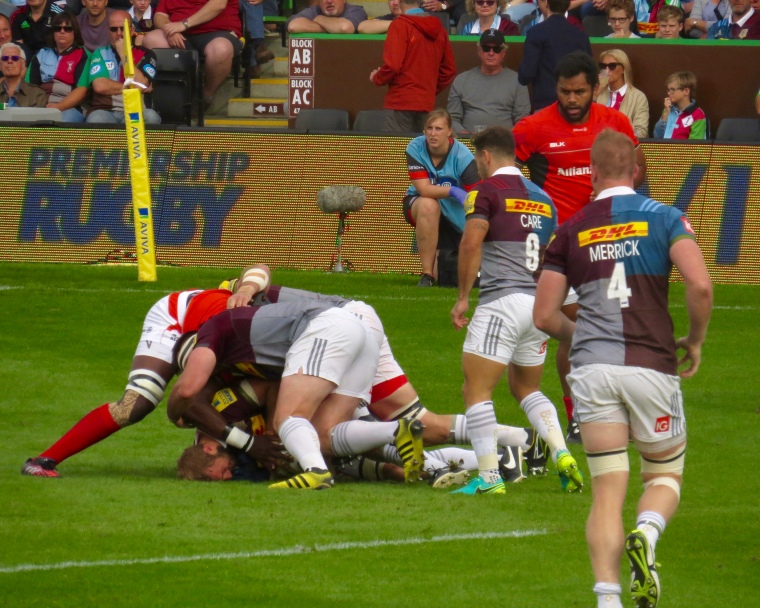 This was Harlequins first game of the new season at the Stoop and it appeared to be a sold out stadium.  I understand that they have a high number of season ticket holders so the ground was predominantly full of Quins fans, they very much became the 16th man for their team as the game progressed. 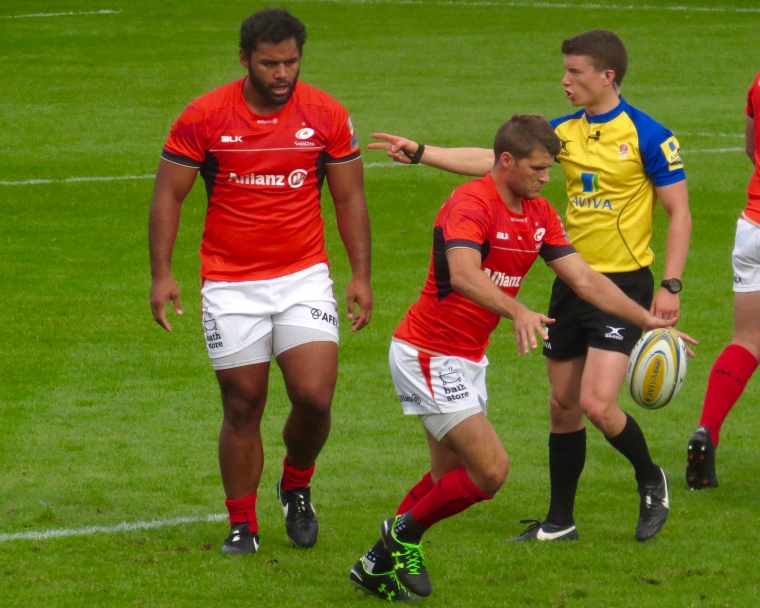 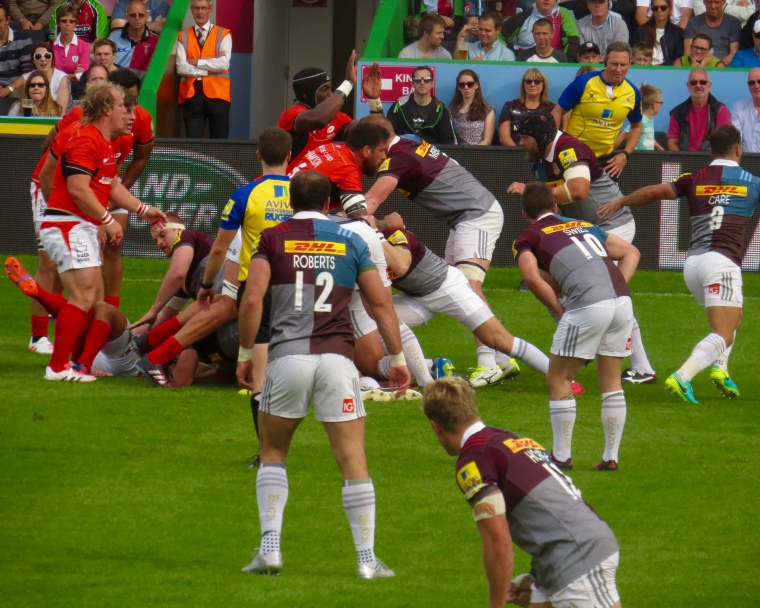 This match up is now the only true London Derby in the Premiership, it comes with high emotion and on this day it also came with a high tempo performance from the home team. 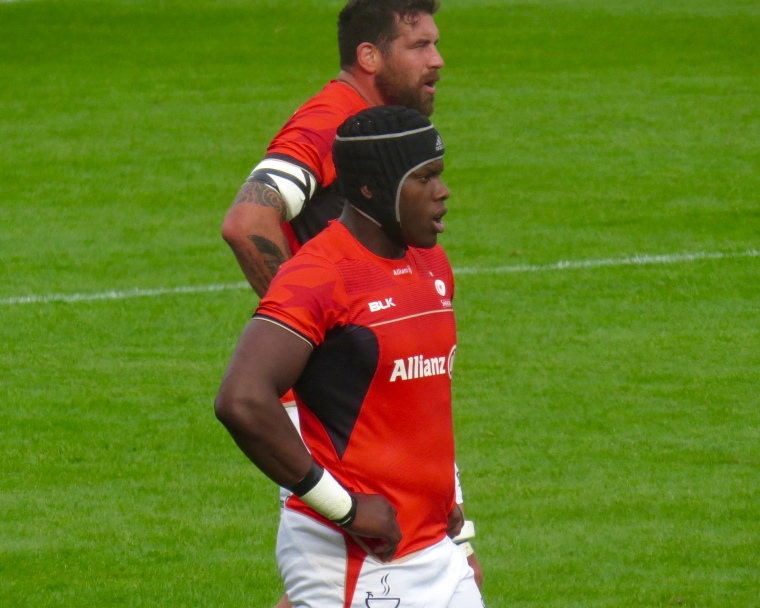 To say Quins were ‘up for it’ would be a understatement, an early penalty scored by Time Swiel was added to when they were gifted a try after a pass by Alex Lozowski went straight to the hands of Tim Visser, I’d say the speedy Scottish winger would be one of the people you’d least want to hand the ball to.  He stormed halfway up the pitch to touch the ball down and send the home fans into raptures and rightly so. 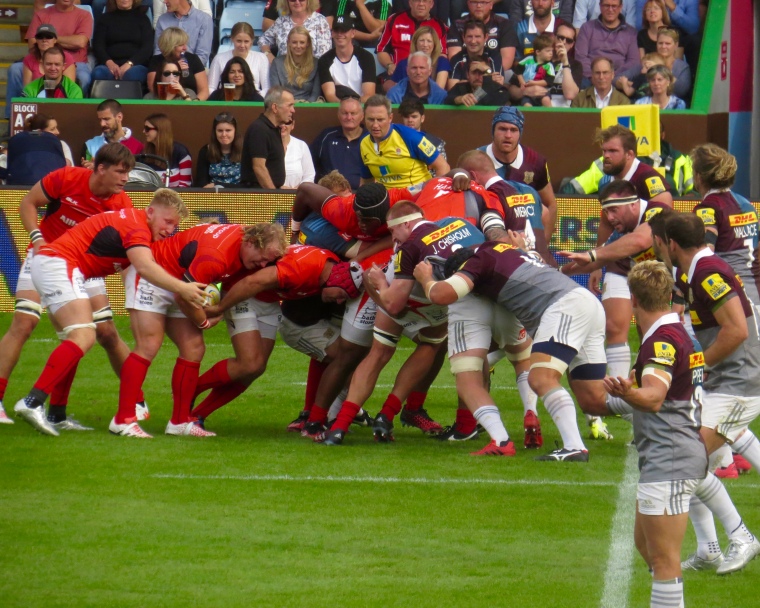 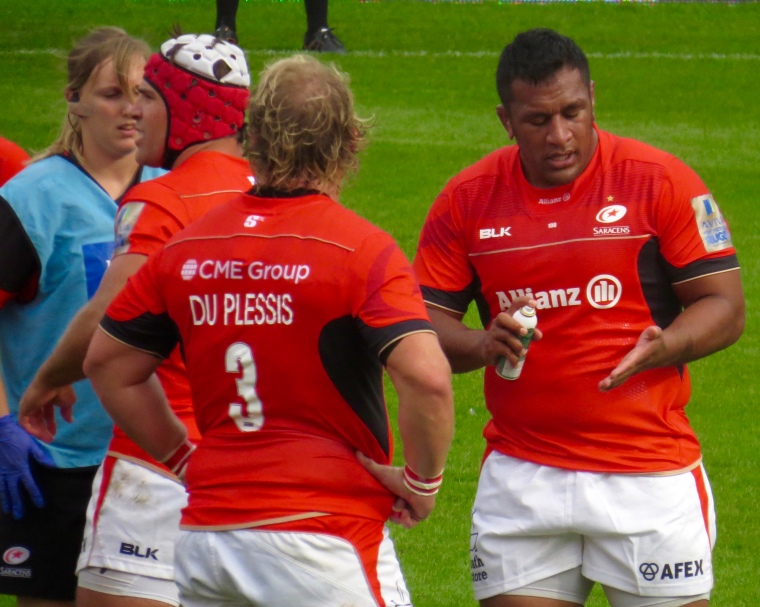 Harlequins scored a 2nd try through Charlie Walker out on the wing, Quins had bombarded the Saracens line and won penalty after penalty, the forwards kept hold of the ball with Walker in some space, when the ball was moved across the line the winger was ready to touch the ball down.  I suspect the fact a try was scored was one of the reasons a card wasn’t brandished at Saracens for repeat offences. 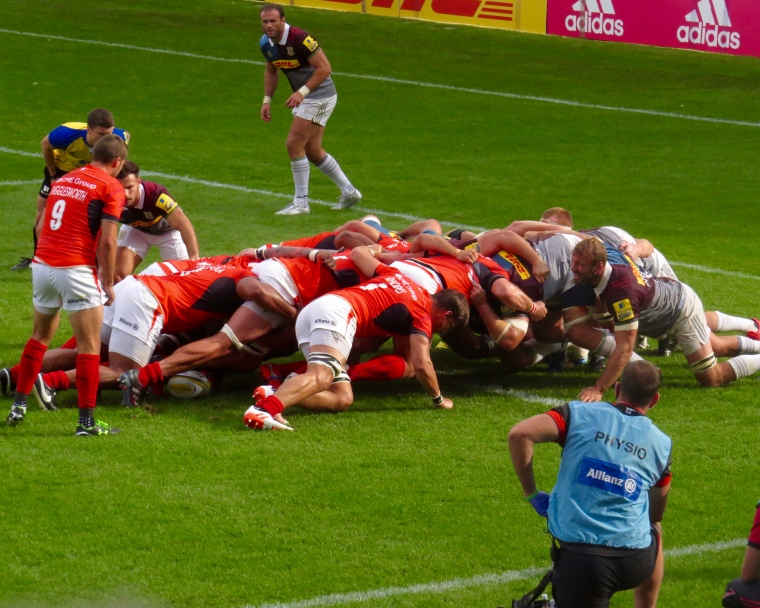 Saracens had no joy in the first half, Quins forwards had them beaten at the breakdown by the pure speed and ferocity of their forwards play, they also seemed to have the visitors number in the scrum. 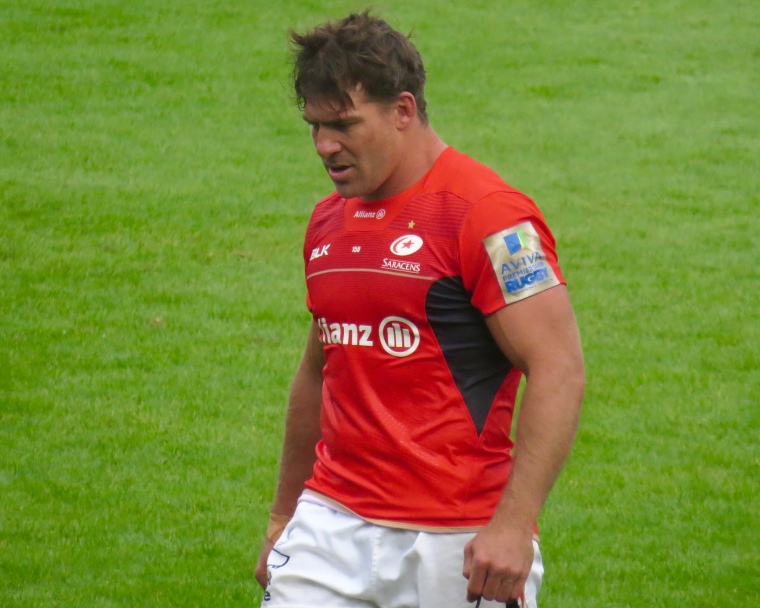 Saracens had a prolonged spell camped on the Quins line, we had another spell of penalties galore, Quins were finally warned but then forced a knock on to win the ball back.  I must make mention of a Quins fan in front of me who was literally going ballistic as penalty after penalty was awarded to Saracens, he kept leaping to his feet and yelling at the top of his voice, there was a spare seat next to him, I was very glad I hadn’t booked that one, we’d have fallen out.  It never ceases to amaze me that those watching feel they’re in a better to position to judge what’s going on rather than the referee who is standing only a few feet away. 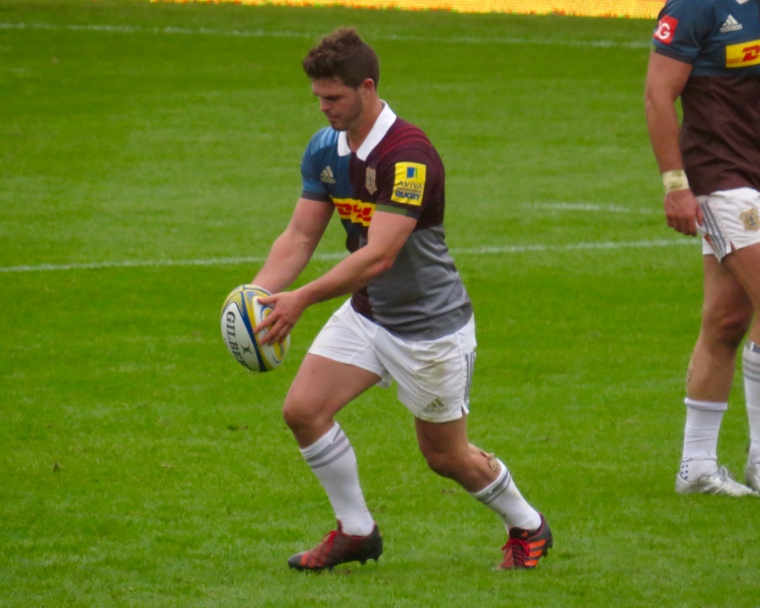 The teams went in at half time with the scores on Harlequins 17 Saracens 0.  There was an air of disbelief amongst the fans around me, but if I’m honest I wasn’t surprised, this game is an important one for both teams and Harlequins have some very fine players.  I’ve never seen Chris Robshaw have anything other than an outstanding game for his club and in the absence of the exceptional Jack Clifford, Luke Wallace and James Chisholm helped produce a great first half for the home team.

The second half saw Saracens get some points on the board, Richard Wigglesworth scored a try for Saracens after Mike Ellery showed his 7’s credentials running round several Quins men and dancing what looked to be very close to the line before he passed to Wigglesworth, I confess I leapt up this time round, but only to show joy rather than anger, much healthier Im sure. 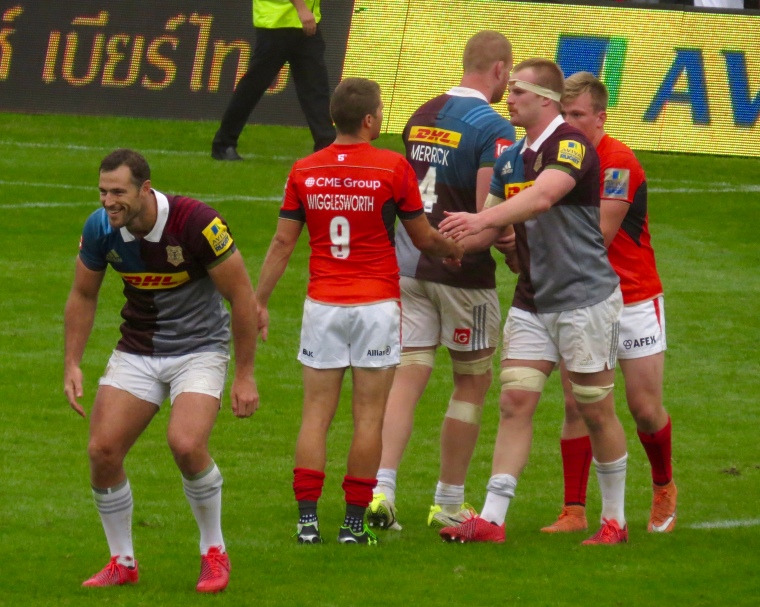 I did exchange a few words with some men behind me, being tapped on the head isn’t what I might expect at a rugby match, but I don’t think the ‘perpetrator’ expected me to engage with him.  He made a general comment about Saracens fans, I told him that just because I had a Saracens shirt on didn’t mean I was one eyed and that I’d be writing good things about his team who were deserving of their lead.  This seemed to surprise him, I did feel the need to tell him he shouldn’t give it if he couldn’t take it back.  I’m never one to sit meekly rightly or wrongly.  We did end up friends by the end of the game.

Saracens weren’t to get near the Quins try line again, several penalties were missed before Ben Spencer slotted one between the posts after James Horwill had been sent to the naughty step with 4 minutes of the game remaining.  He received a lot of applause for his game performance of course not for the enforced rest.

The late penalty saw Saracens go home with a bonus point but Quins took the spoils with the final score being Harlequins 17 Saracens 10.  There was joy aplenty both on and off the pitch, Saracens will come back bigger and better and hopefully this win will kick start Quins season, they travel to Wasps next, tough opposition! Both teams lost players during the game, Schalk Brits looked very fragile as he left the pitch at half time and Danny Care was led from the pitch after landing heavily on the ball with what looked like damaged ribs.  Key players for their teams here’s hoping they’r both back soon.