My morning had a much better start than Day 1, I drove to the road I was parking in rather than driving miles away from the ground! It was a […]

My morning had a much better start than Day 1, I drove to the road I was parking in rather than driving miles away from the ground! It was a much better plan.  My seat was in the Scriveners Opticians Stand, I knew this would be a good seat because I’d picked it when I visited the ground to watch Essex play last year.  I was in Row A so had a perfect view of what was to be another great day of test cricket!

I had lovely neighbours again, I didn’t exchange names with the people on my left, but for most of the day I had a really lovely lady called Trudi on my right.  There were plenty of empty seats so we were able to spread ourselves out a bit which made a very hot day much better than being crammed in.

I imagine wagers were being made across the ground as Sam Curran and Jimmy Anderson came in to bat , I don’t suppose they’d have figured on it being Sam Curran who was out.  Jimmy played forward to an over from Ravi Ashwin, to big cheers.  But Sam Curran edged the 4th ball of Shami’s over to Karthik, he’d scored a very accomplished 24 and England were all out for 287. 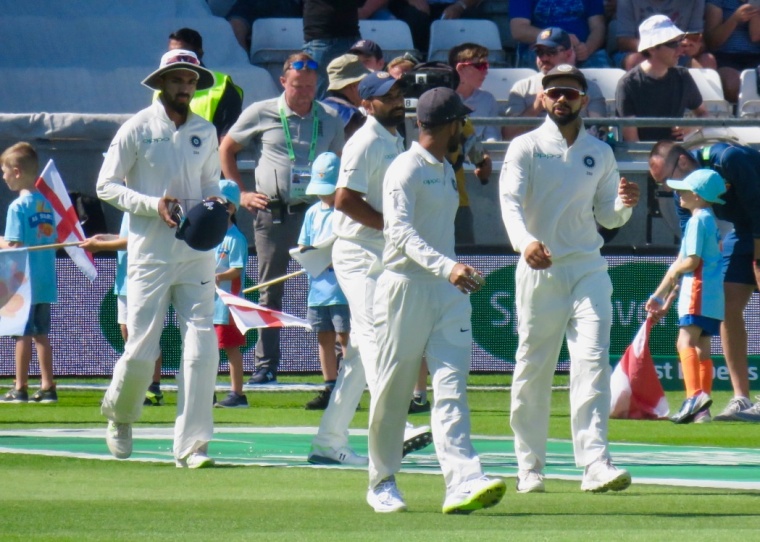 Murali Vijay and Shikhar Dhawan opened the batting for India, the tour hadn’t been the best for Dhawan but he started really well along with his opening partner.  The ball didn’t seem to be doing much as the promised clouds didn’t really appear. Yet Jimmy Anderson was causing problems with no wicket to show for his efforts. 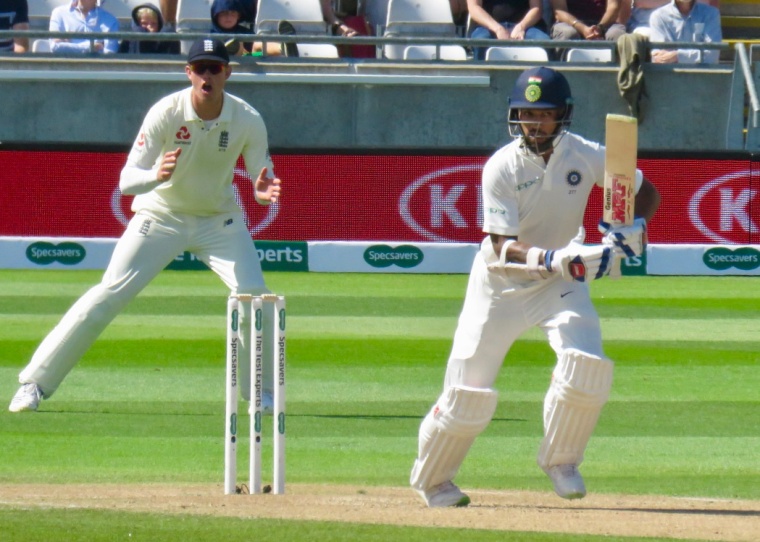 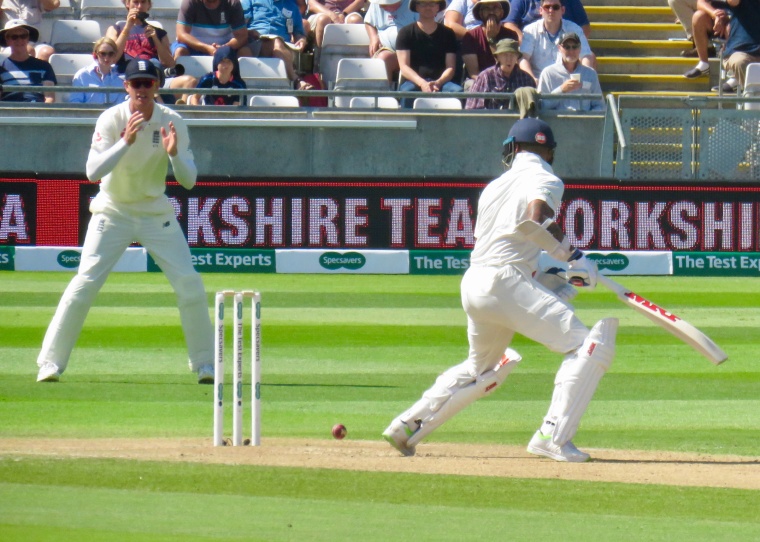 At 50 for no wicket the 2 were cruising, Joe Root had queried the ball several times, he did the same thing against Pakistan at Lord’s to no avail.  It looked like this was going to be a long, painful day in the field for England. 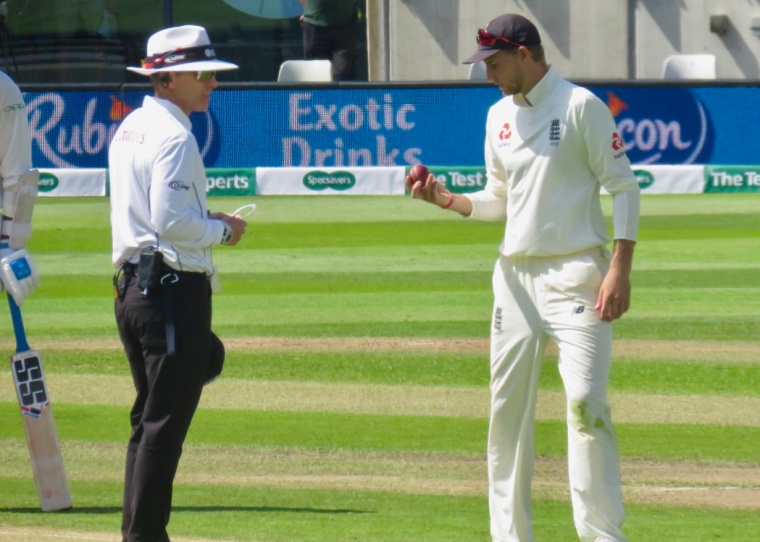 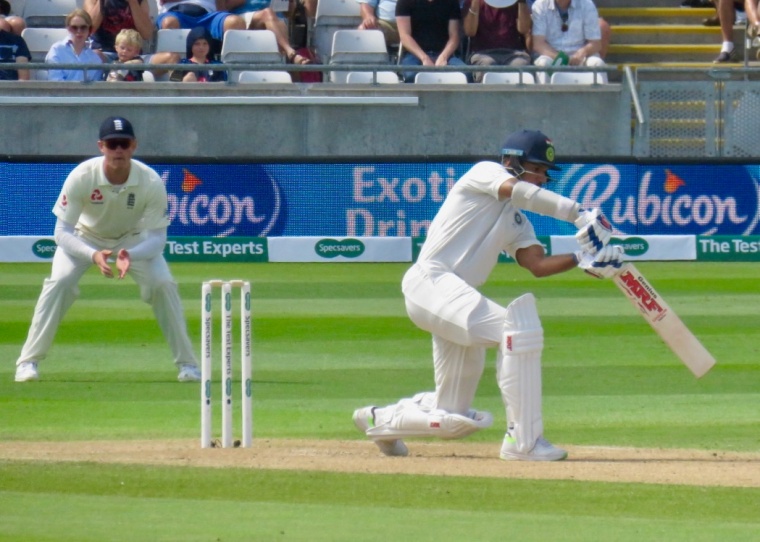 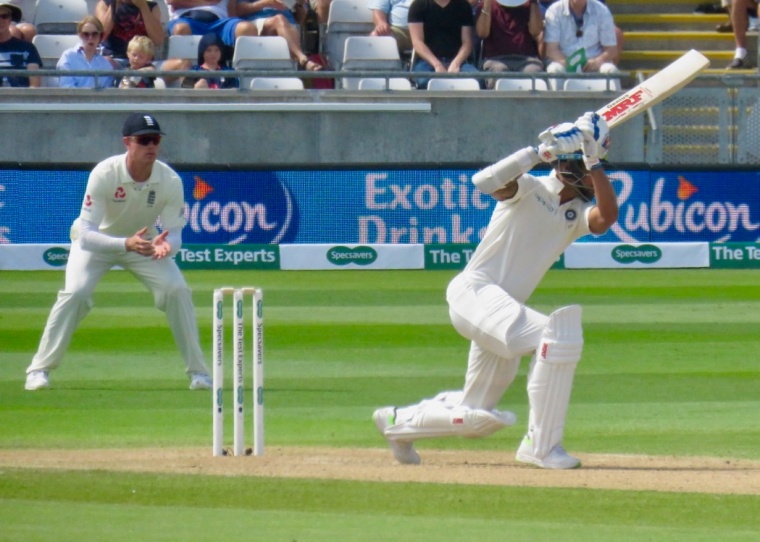 Then, along came 20 year old left hander Sam Curran, he trapped Vijay LBW for 20 then 2 balls later he clean bowled KL Rahul for a Duck we wouldn’t be seeing the elegant new man, suddenly India were 54 for 2 and things weren’t looking quite as clear.

That wicket brought Virat Kohli to the crease, he’d see Shikhar despatched by Curran 2 overs later as he was caught by Dawid Malan for 26, India were 59 for 3, Sam Curran had blown them away!

Next in was Ajinkya Rahane, one of the few batsmen who’d made a name in 2014 when India last toured.  The pair looked comfortable at the wicket together, Joe Root made a bowling change, and again it worked, Ben Stokes had Rahane caught for 15 and India were 100 for 4.

Dinesh Karthik joined his captain, take note Michael Vaughan, his name is Dinesh not Dennis! That did make me laugh on Day 1!  Karthik lasted 4 balls before being bowled by Stokes for a Duck, 50 for no wicket had very quickly turned into 100 for 5.

Things might have been very difficult for India had Malan not dropped Kohli when he was on 21, a ball from Jimmy Anderson went low and Jennings went slightly in front of him, but it was a catch that should’ve been taken.  Hardik Pandya who came in at 7 was dropped by Alastair Cook from the first ball of Ben Stokes over!  Cook’s catch also looked like a must catch!   The first drop would prove to be very costly!

Much had been made of the fact that Kohli hadn’t fared well in England in 2014, but a lot had happened in the 4 years since and he’s come to England determined to change that sort of chatter.  He scored 301 runs in the white ball series and looked in determined mode.

Pandya, one of the glamour boys in the India team is fairly new to the test arena, with this being only his 8th Test.  he batted with Kohli for 77 minutes, making 22 runs of a 48 partnership before being trapped LBW by Sam Curran.  His 4th wicket!  The 20 year old was certainly making his mark! Kohli was approaching his half century but was at risk of running out of partners.

Ravi Ashwin became Jimmy Anderson’s first wicket, he was bowled, leaving no room for doubt, he’d made 10 and India were 169 for 7.  Ashwin had survived an LBW review by England.

That left Kohli on 58 with 3 tail enders to support him, what then happened really showed the batting class of this man.  The 3, Mohammad Shami, Ishant Sharma and Umesh Yadav made 8 runs between them, but, India went from 169 for 7 to finish on 274 all out.

I confess I was willing Kohli to get his century, he deserved it, I hadn’t imagined he’d made 149 before he was finally caught by Stuart Brian from the bowling of Adil Rashid.  he’d batted for over 4.5 hours and faced 225 balls.  It was an outstanding knock and will hopefully quieten his doubters.  The innings finished with India trailing by just 13 runs, how different it would’ve been had those catches been taken.

I imagine Adil Rashid had a fairly miserable day before he took the final wicket, he was fielding out on the boundary for most of the day and only bowled 8 overs, the match was crying gout for him to be brought on.

The final wicket falling gave enough time for England to face a few overs.  Not much fun when you’ve been in the field all day!  Not much good for Alastair Cook either as he again a nasty ball from Ashwin, he was bowled for a Duck, a day he’ll want to forget,.  That finished the day off and England went in on 9 for 1, a lead of 22.

That was another wonderful day of Test cricket!  A new seat and new neighbours tomorrow, I can’t wait!