Leapfrogging Event 103 again I have to continue with the Trent Bridge Ashes!  I’ve learnt lessons about buying tickets this summer, they’re cheaper for a reason!  I paid £60 for […]

Leapfrogging Event 103 again I have to continue with the Trent Bridge Ashes!  I’ve learnt lessons about buying tickets this summer, they’re cheaper for a reason!  I paid £60 for a Day 2 seat and was a tad disappointed with my view.  I was in the William Clarke Family Stand and had a huge gap, then advertising boards in the way of the game.  I won’t make the same mistake again.

Before I go into the detail of Day 2 I must just remind- ENGLAND BOWLED OUT AUSTRALIA FOR 60 RUNS ON DAY 1.  Well when I say bowled I pretty much mean caught!  Still pinching myself at having witnessed that! 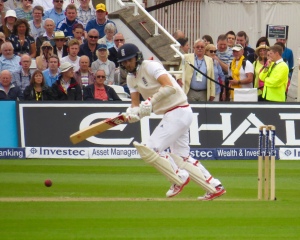 Could England finish this game off and regain the Ashes before the 5th Test at The Oval?  They had to be favourites to do so having finished Day 1 with a lead of 214 and Joe Root with 124 to his name. 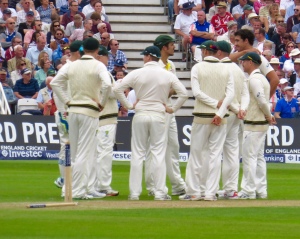 That felt like a strong position but more runs on the board would cement the win.  The teams emerged to much fanfare for Joe Root and night watchman Mark Wood. 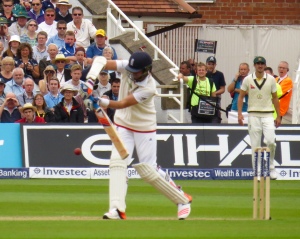 I don’t know too much about Mark Wood, only what I’ve seen during this test series, but he’s handy with the bat, he proved that in Cardiff adding valuable runs.  He looked a well established all rounder during his innings at Trent Bridge, playing some shout out loud great shots. 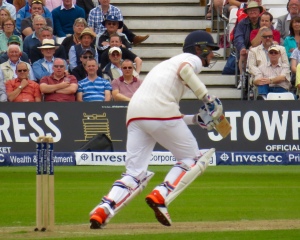 Mitchell Starc was to have a shout out loud great day with the ball in hand and he despatched Joe Root taking his tally for the innings to 4.  Peter Nevill adding to his growing list of catches.  Root was clearly hugely disappointed as he’d only added 6 to his overnight score. 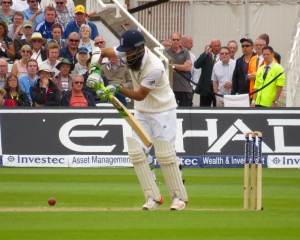 Wood was to fall to a corker of a ball from Starc, resulting in the unusual sight of the bails and a stump flying!  No matter who’s on the end of a ball like that it literally has me shouting out loud – I’m a bit of a weirdo really! 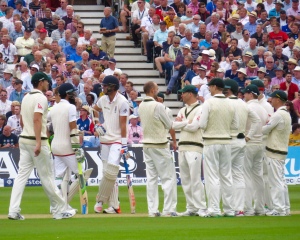 Ben Stokes and Jos Buttler were at the helm,  but not for long, Buttler had faced 11 balls before his stumps went the same way as Roots’ cue more shouting from my direction!  I’m 100% an England fan, but wow I love to see bails flying! (odd)

Josh Hazlewood got into the act taking Stokes’ wicket with another catch by Nevill – England were 332 for 8 – a lead of 272, that felt a little skinny.  However we had the super partners Moeen Ali and Stuart Broad at the crease.

I’ve said it before but I’ll say it again Ali is a batsman who can bowl a bit, useful to have when he’s coming in at 9!  Stuart Broad has found his batting mojo again too and the pair seem to enjoy each others company. 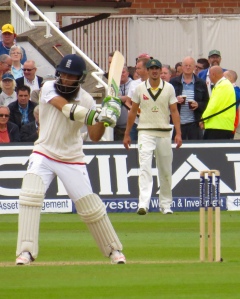 They put on 58 entertaining, useful runs before pantomime villain Mitch Johnson bowled a ball that scooted away from Ali’s bat, Steve Smith took an amazing catch that really shouldn’t have been possible!  Ali had scored 38. 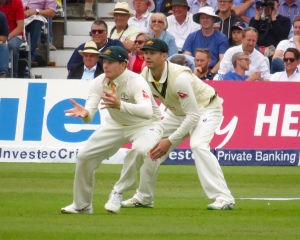 Being the photo geek I am I was thrilled that I’d chosen to focus my camera on Smith at that very moment!  Very satisfying.

Steve Finn joined Broad with the score on 390 the innings was nearly done, in a bold move Alastair Cook called them in declaring on 391.  What a change in his captaincy this summer, it’s like watching a different man!

Australia in the form of Chris Rogers and David Warner had a few sticky over to face before lunch.  This time the 2 openers were up to the task, it would be very easy to forget that world class batsmen occupy the top of the batting order.

Rogers had lost his record of never being out for a duck during his international career during the first innings, he was unlikely to face the same fate. 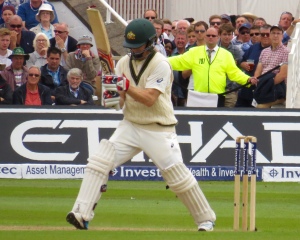 Stuart Broad had an amazing Day 1 taking 8 wickets for 15 runs, I may have mentioned that in a previous ‘episode’ who would step up the the plate this time round.  Jimmy Anderson and Steven Finn had shared the glory at Edgaston would we see a 4th bowler excel? 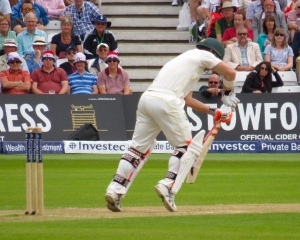 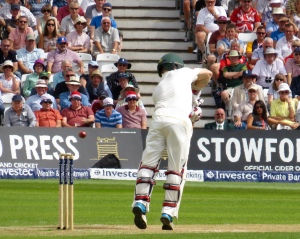 The openers looked set and played the shots we all know they’re capable of, reaching a partnership of 113 before the first leaping out of the seat moment as Rogers hit the ball to Joe Root in the slips from the bowling of Ben Stokes, he’d made a far more respectable 52. 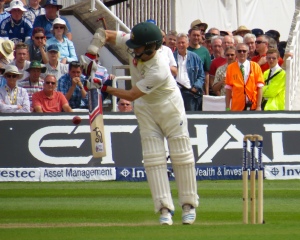 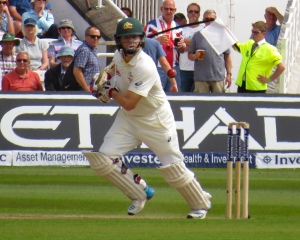 Rogers was in effect out twice having been caught in the slips, however Mark Wood had committed the school boy error of bowling a no ball, the 2nd time in his England career a wicket turned into a non wicket.

Warner had also survived a dropped catch as Alastair Cook put the ball down early on. however he went for a rash shot as he has so often this summer to be caught by Stuart Broad from the bowling of Stokes.

Steve Smith and Shaun Marsh in at 3 and 4 had very brief stays, Smith seems to have been found out on the English wickets, with the exception of an outstanding innings at Lords he really has underperformed.

Stokes took his 3rd wicket with another Root catch, Marsh included for his batting prowess had failed again, walking back to the pavilion with 2 to his name.

Broad and Stokes swapped places as Smith fell to another good catch by Stokes for a mere 5, giving Broad 9 wickets for the game.

Michael Clarke a beleaguered man had come in at 5, I for one was hoping to seem score runs, but again he couldn’t find his mark and was caught in the slips, this time Ian Bell was the man, Mark Wood the bowler.  Clarke had 13 and Australia were on 174 for 5.

Adam Voges another man who’s failed this summer showed his mettle but was running out of partners.  Peter Nevill became Stokes 4th ‘victim’ being deemed LBW – he also had been ‘out’ but from another no ball, this time from Finn. 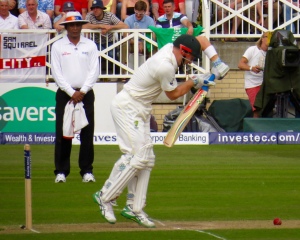 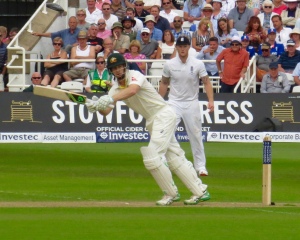 Mitchell Johnson came to the wicket – he really has become a popular man with the English crowd, he was all the more popular when he became Stokes 5 For wicket!  Captain Cook taking the catch this time.

Australia were 236 for 7 and on the verge of a test defeat – England were on the verge of regaining the Ashes – 3 wickets were all that stood between them and a miraculous turn around.

The day finished to the disappointment of the crowd with a few overs remaining due to bad light, the hopes of seeing the Ashes returned after 2 days snatched away. 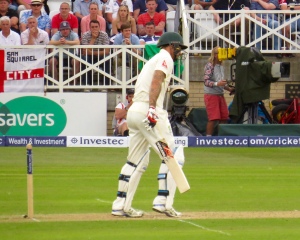 I had my next sporting adventure to get to so had to listen to Day 3 on the radio – I was on the M4 heading into Cardiff dreading the bridges and tunnels that took away my radio signal.

Ben Stokes took his 6th wicket when Starc was caught by Ian Bell – 242 for 8!  Mark Wood made short work of the final 2 wickets – bowling both Hazlewood and Lyon.  England had regained the Ashes winning the test by an innings and 78 runs!