Saracens face Exeter Chiefs at Allianz Park as they attempt to take the top spot back.

A very good subtitle for this takes me back to  a Thin Lizzy song – The Boys are Back in Town!  Saracens had faced a ‘problem’ similar to that faced by the likes of Leicester Tigers at times during the 6 Nations window – Looking at the England 6 Nations winning squad in Paris here are the Saracens men

Jamie George had been included in the squad but was injured.  Duncan Taylor was away on international duty with Scotland.  Add in Chris Ashton who was banned for 10 weeks just before the tournament, Schalk Brits who was handed a 3 week ban during and Charlie Hodgson who picked up an injury and the depth of the squad had been tested.

With the Rugby World Cup delaying the start to the season there was no LV Cup window to ease the way for those teams with international players missing.  The window was an ‘interesting’ one for Saracens to say the least!

My attentions turn to International rugby as a rule in February and March, this year I saw England win in Edinburgh, Rome and Paris, and Wales beating France in Cardiff (my favourite stadium!).  Add in the Rugby League World Club Challenge games and a knee operation and that meant I missed 3 home Saracens matches.  Although I admit to a soft spot for Wasps, I have to say I’m quite happy to have missed that one!  And shockingly I deleted the match before watching it. 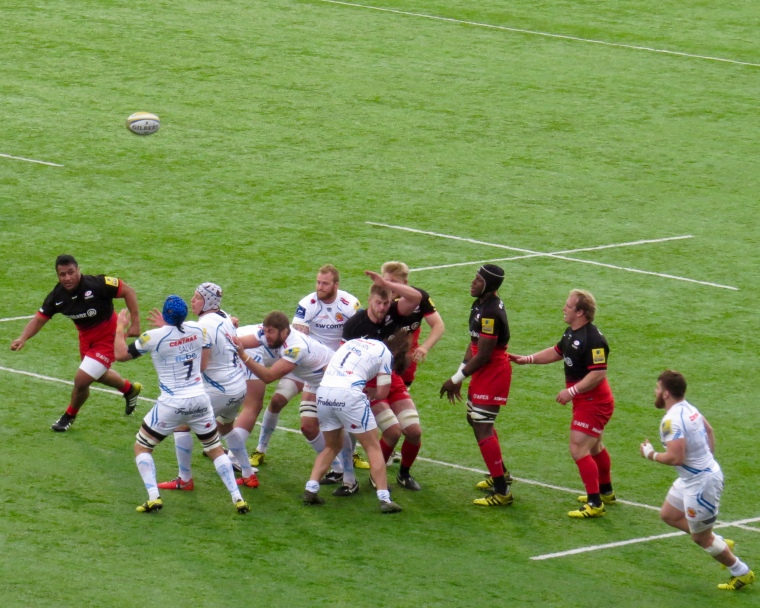 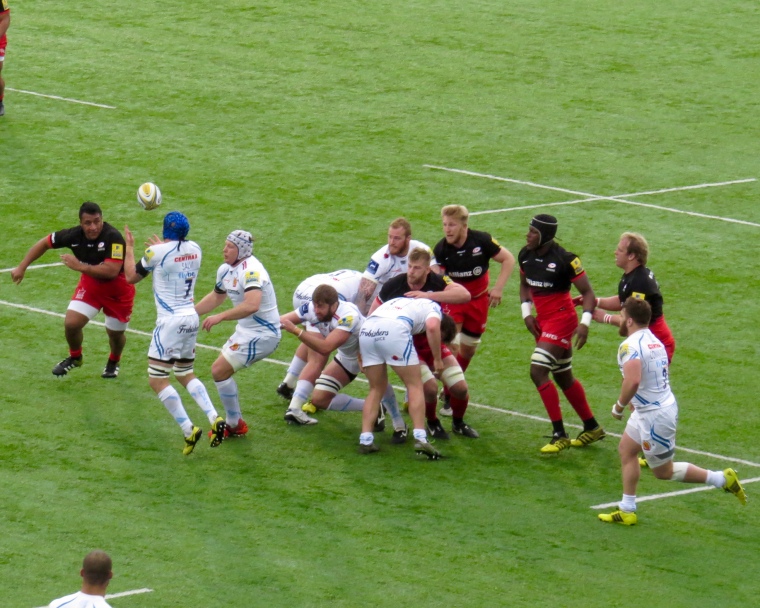 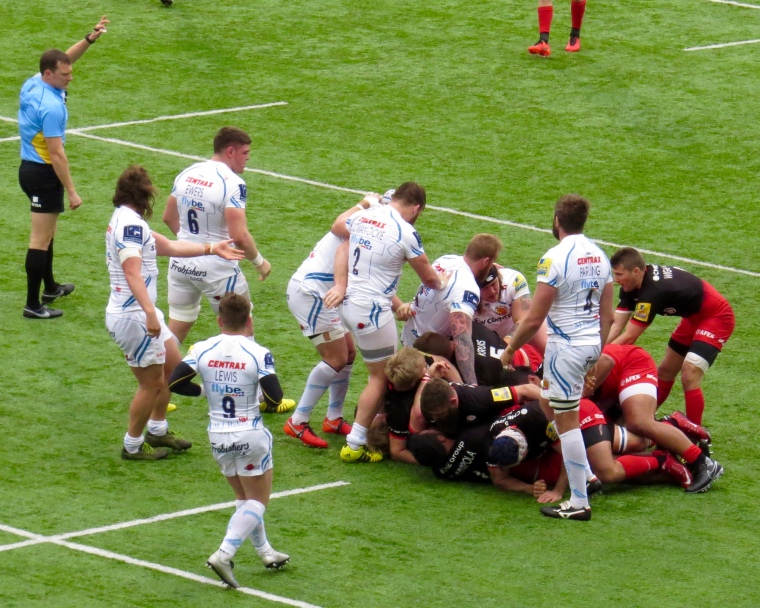 The net effect of all of that was that Exeter Chiefs leapfrogged Saracens to take and keep the top spot after Round 17 of the Premiership Rugby competition.  With only 4 rounds of the ‘standard’ season remaining this ‘6 pointer’ would be key.  A home semi-final is of huge importance once things get to the business end of the season.  With Wasps in a fine run of form and breathing down the necks of the Top 2 the points from this match were likely to be vital. 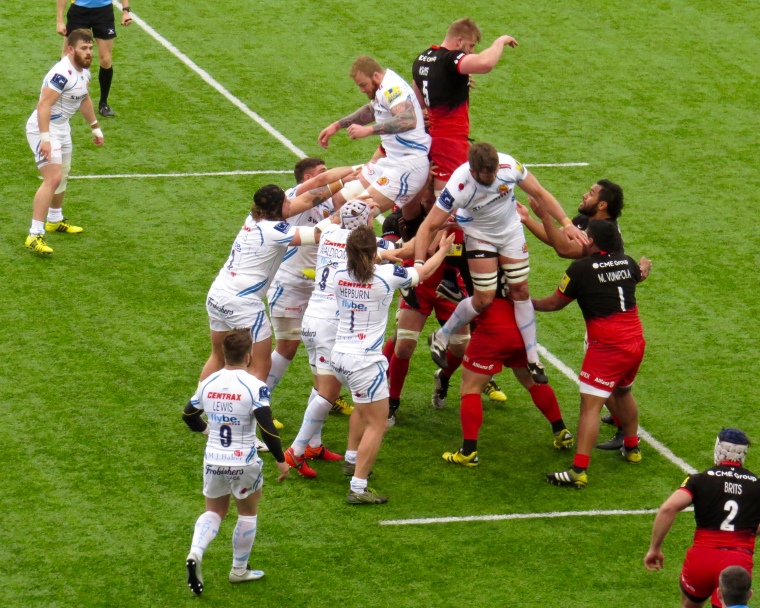 I’m not going to write a full blown match report more to give my impression of the game overall and as usual share my photos from the day.  I was expecting a close game, and was hoping for a home win.  It was very pleasing to see Henry Slade back in a starting spot with the Chiefs, a naturally talented back, it was also interesting to see him with the number 13 on his back. 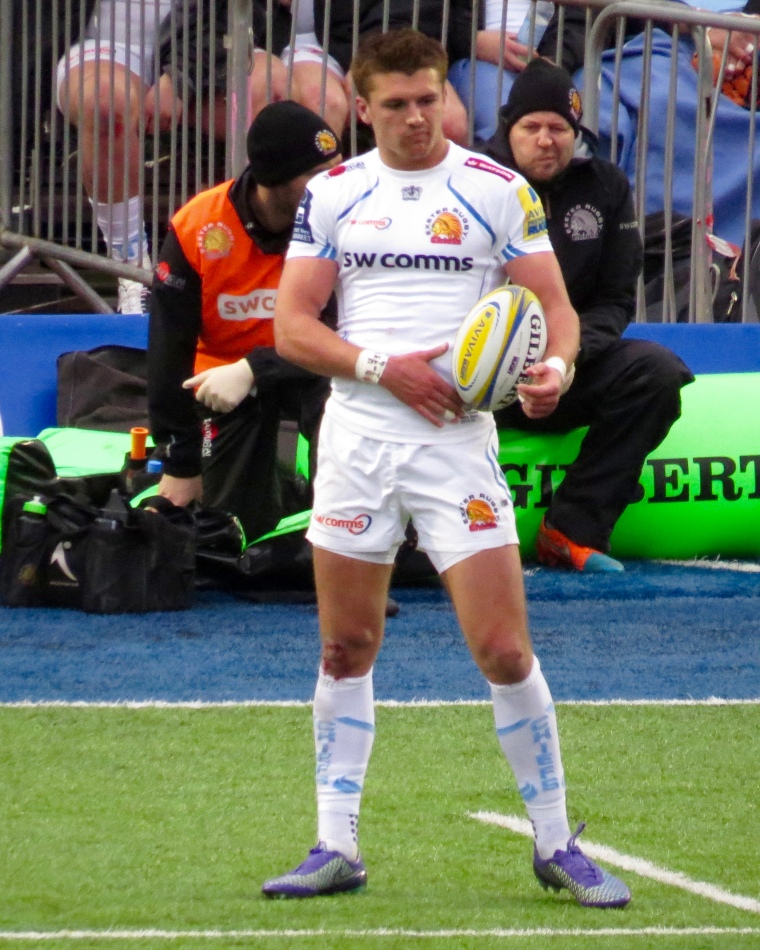 Both teams had wanderers returned, with Schalk Brits back in the fold too.  There was no Jack Nowell however, I believe he doesn’t play on artificial surfaces due to knee issues. 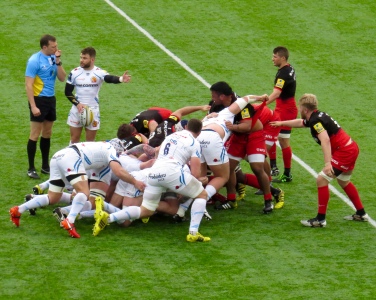 I think it would be fair to say the game was anything but close, it was a day for keeping the ball in hand due to the wind and Saracens excelled, that really is the only word I can use.  Considering they were playing the team who’d been breathing down their necks all season it was an impressive sight.

The first half saw Alex Goode making his 200th appearance for the club, he scored the first try after 17 minutes, with Owen Farrell adding the extras.  Billy Vunipola scored the second try, in the corner, which by rights he really shouldn’t have!  The conversion, in the wind was always unlikely but Saracens were 12 points ahead. 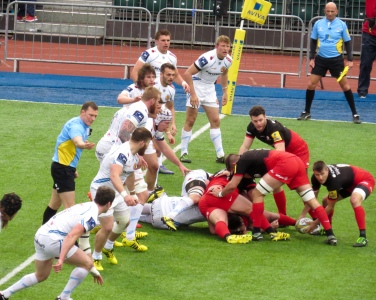 Exeter Clawed their way back to a 6 point gap with 2 quick  Gareth Steenson penalties just before half time.  The scoreline of Saracens 12 Exeter Chiefs 6 wasn’t a reflection of the half of rugby we’d seen. 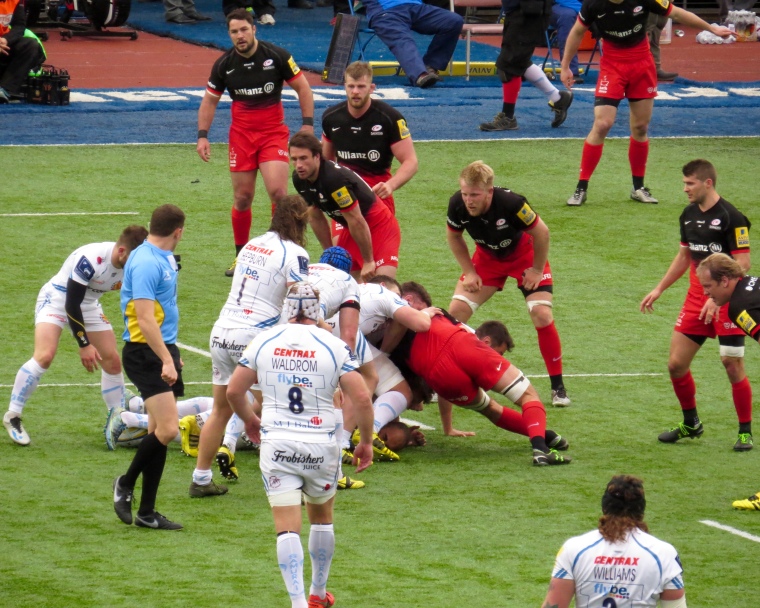 The day was a big one for 3 Saracens, along with Goode, utility back Chris Wyles was making his 200th appearance.  I have to praise this man, no matter where he’s placed in the back line he always gives 100% and looks a natural.  Neil De Kock who came on as a sub in the second half was making his 250th appearance – that’s a lot of time in a Saracens shirt!  Both men are hugely popular amongst both their team mates and with the fans. 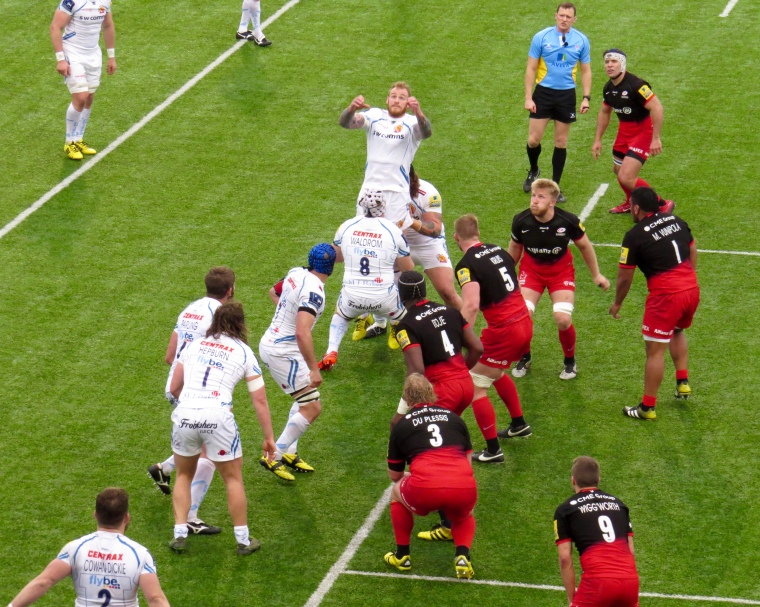 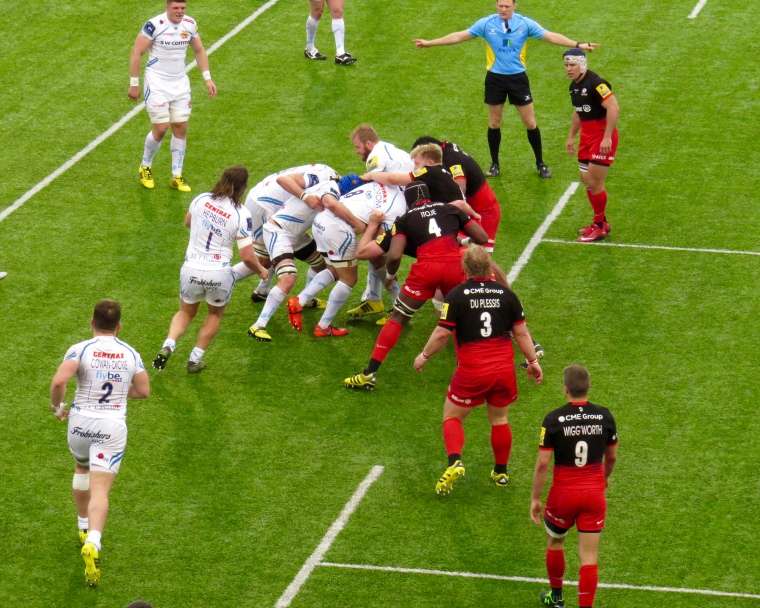 It was however Owen Farrell  who scored the next try, capitalising on a Schalk Brits pass after Billy V broke through the Chiefs defence – he raced in to score  a shout out loud exciting try – I’m not sure I’ve seen him run as fast before!  He converted his own try and took a moment to recover before play started again.

Thomas Waldrom, the top try scorer in the Premiership in 2014/15 added to his tally for this year with a trademark try, with the wind again thwarting the chance to add the 2. I have said time and again and will take this chance – I just can’t comprehend why this man wasn’t in the England World Cup squad! 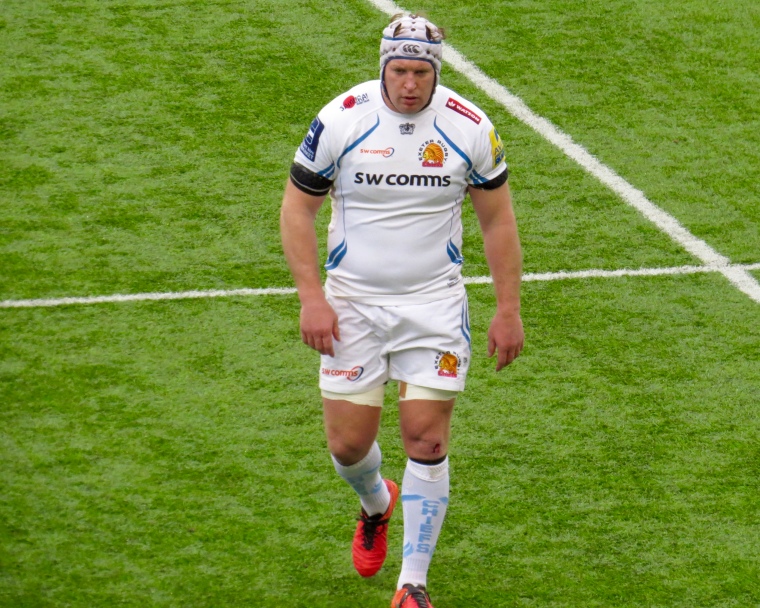 Saracens were in scoring mood however, and a superb pass by the 250 man, Neil De Kock saw Jackson Wray score the bonus point try.  That was something Saracens failed to do time after time last season and was a factor in their 4th place finish.  Farrell kicked from in front of the posts to add the extras. 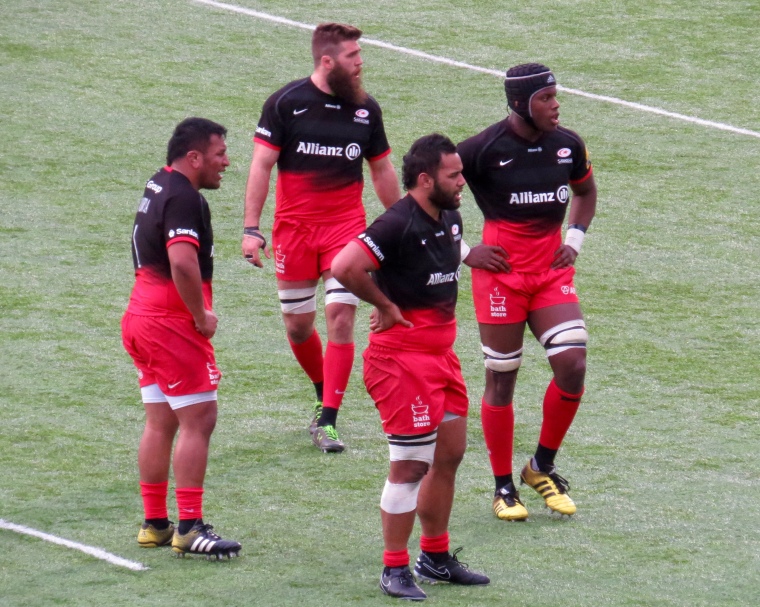 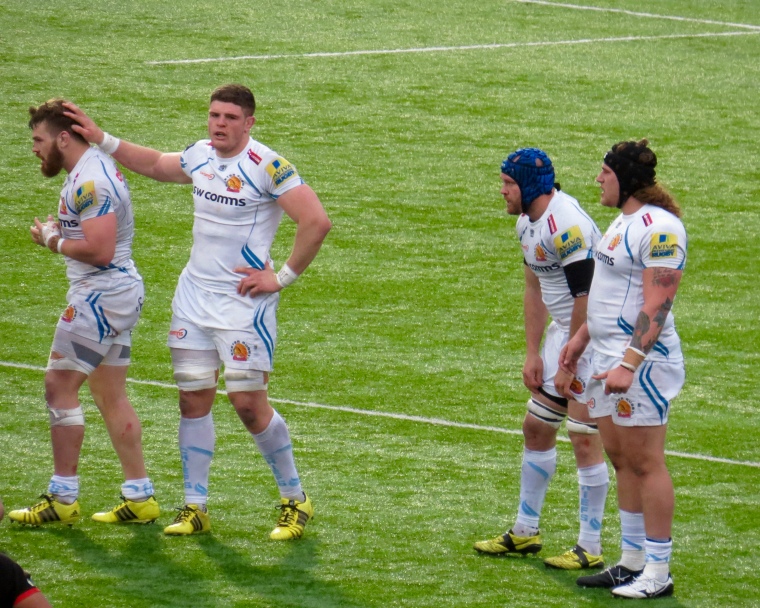 Chris Wyles wasn’t to be outdone on his special day, showing his strength as he powered over the line for Saracens’ 5th try.  With Owen Farrell off the pitch Goode stepped up and effortlessly scored the 2 points. 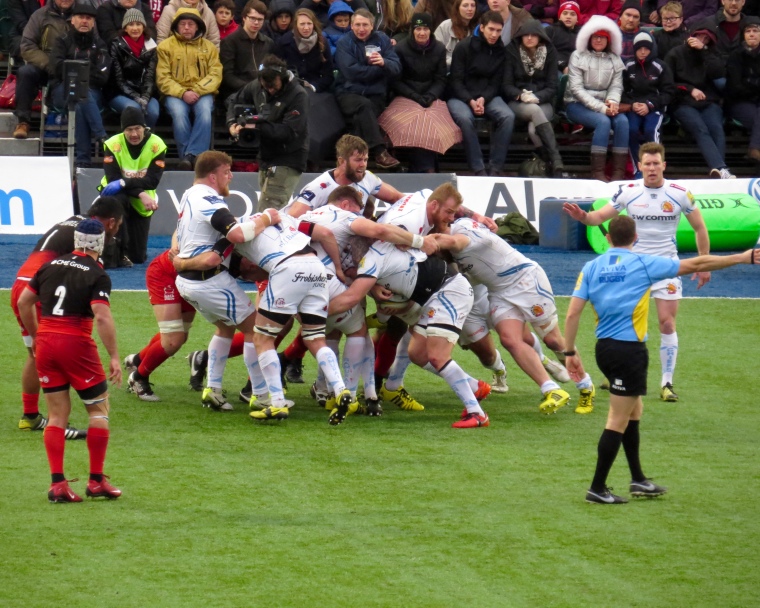 In common with the first half, Exeter and Waldrom had the last word, he scored his 10th try of the season, Will Hooley on as a sub added the 2 to give the scoreline some respectability.  The final score – Saracens 36 Exeter Chiefs 18.  It was very clear that those who’d been on international duty were very happy to be home!

This result and Wasps weekend sees them a single point behind the Chiefs – I was very disappointed that the team from the South West didn’t make the play offs last year, I really hope they stay firm and keep hold of their Top 4 spot this season.