Attending the Big Game has become a tradition for me, I’ve been to every one, for Big Game 9 it was all a bit different.  My big brother suggested a family outing, the rugby and hospitality as a family group, what could be better?  That involved 11 of us, 5 from Scotland, 4 from Surrey, so naturally Quins fans, 2 of us from Essex, albeit one via Paris.  We made our way to Twickenham, taking 2.5 hours from Essex, rather longer from Scotland. 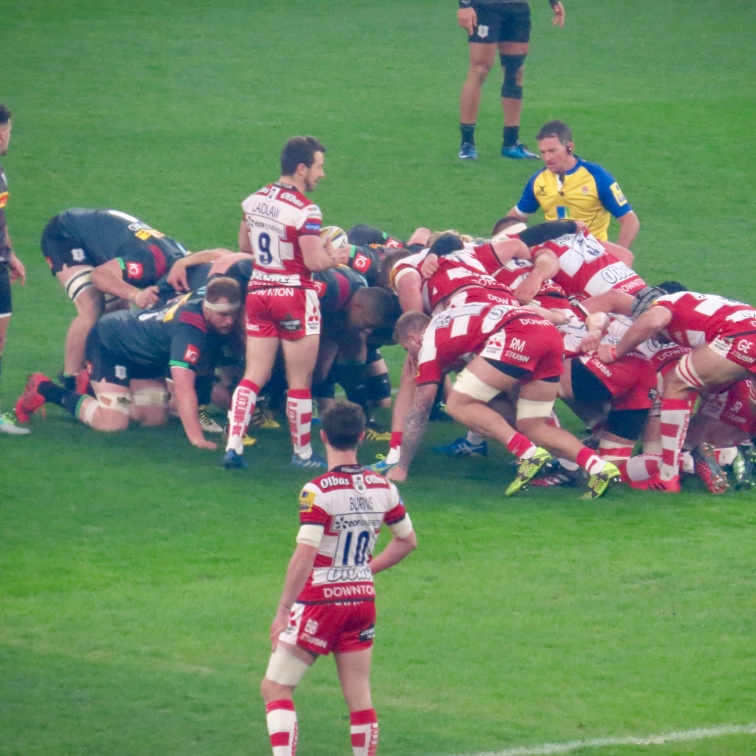 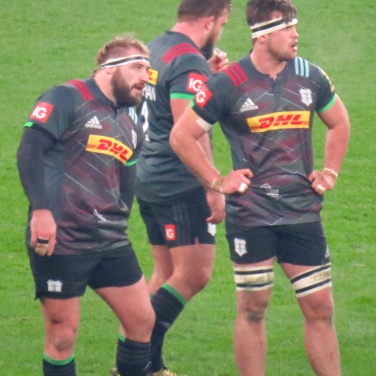 I’m not sure of the numbers but the catering was of a high standard, especially the main course, at £145 a head it would have been good if some drink had been included but that was an extra.  In all honesty the seats for the game weren’t the best, the view was disappointing to say the least.  I’m not too sure we’ll go the hospitality route again. 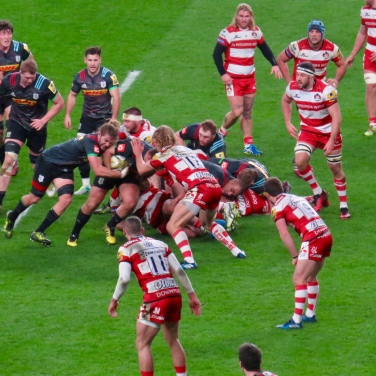 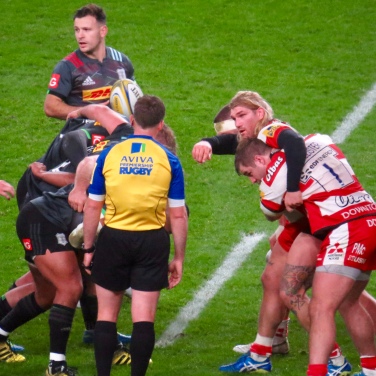 As far as the game is concerned I find myself a long way behind so will be brief, I’m not sure how the opposition is picked for the Big Game or if it’s just a regular game decided on at the beginning of the season.  This was a game between 2 mid table teams, Quins had won 5 of their 10 games, including a victory against the Champions Saracens.  Gloucester had only 3 wins to show from their 10, seeming to snatch defeat from the jaws of victory at times. 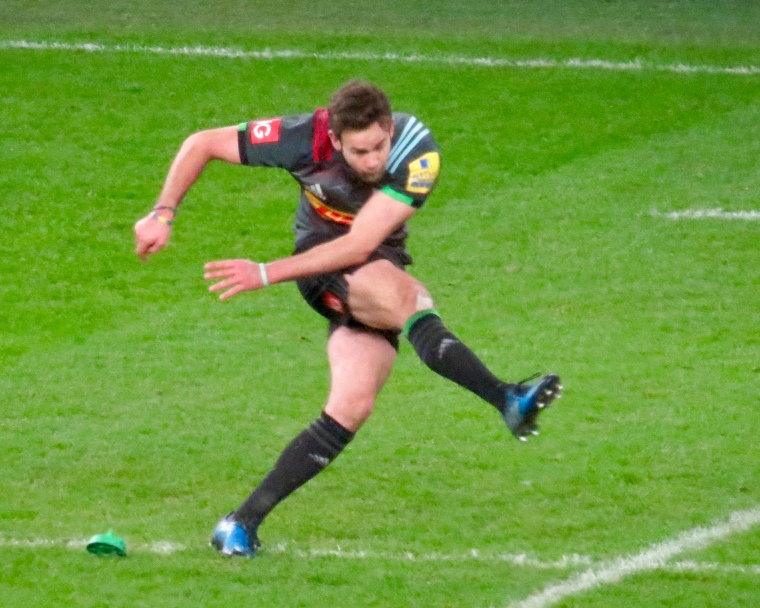 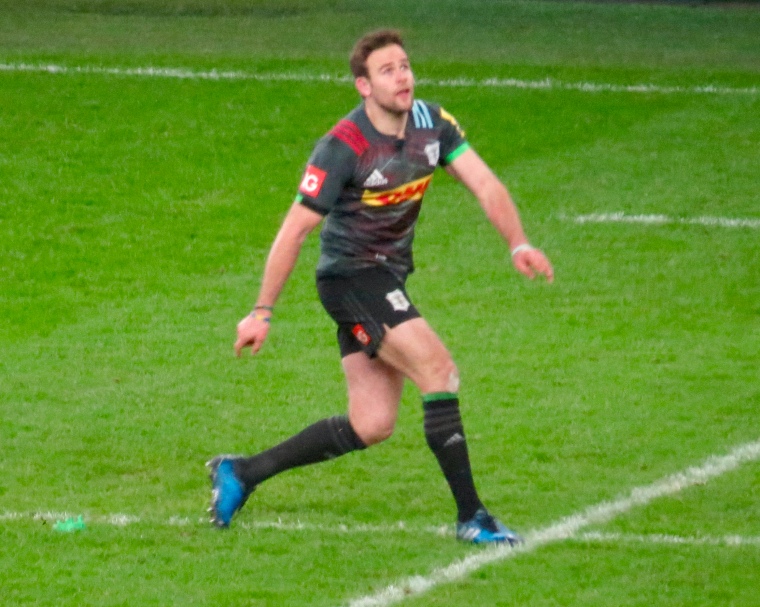 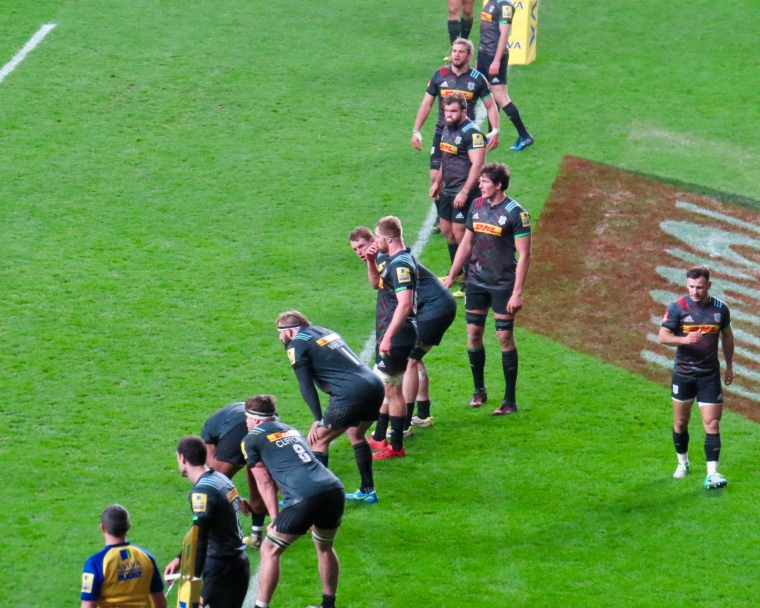 It has to be said the first half was less than thrilling, it was an argument for changes to be made to the way the scrum works as far too much of the action was rolled up into that area.  The one try of the half was scored by Joe Marchant, part of the successful England U20 team he’s making his mark as a strong running Centre with the Quins first team.  Ruaridh Jackson missed the conversion and Greig Laidlaw closed the gap with a penalty 6 minutes later.  Jackson converted a penalty before being given another chance when Jonny May was deemed to have knocked the ball on deliberately, he saw a yellow card and Quins stretched their lead to 7 points `at half time. 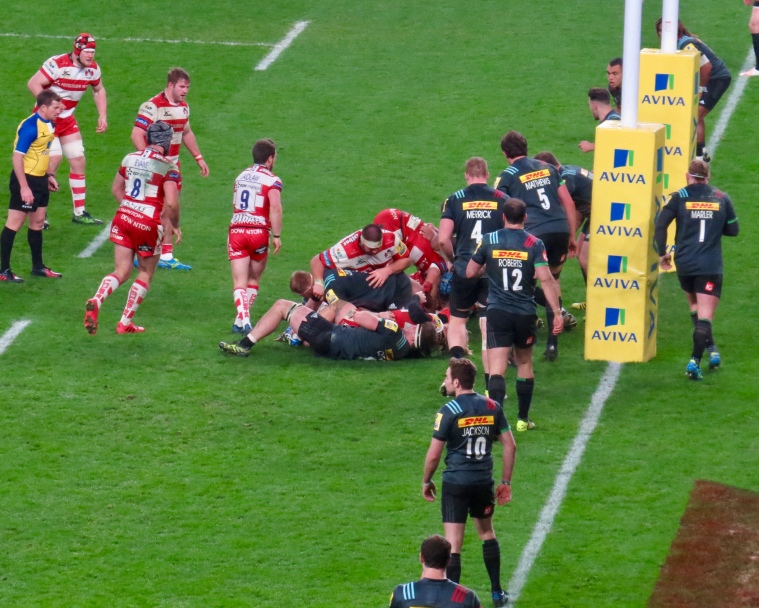 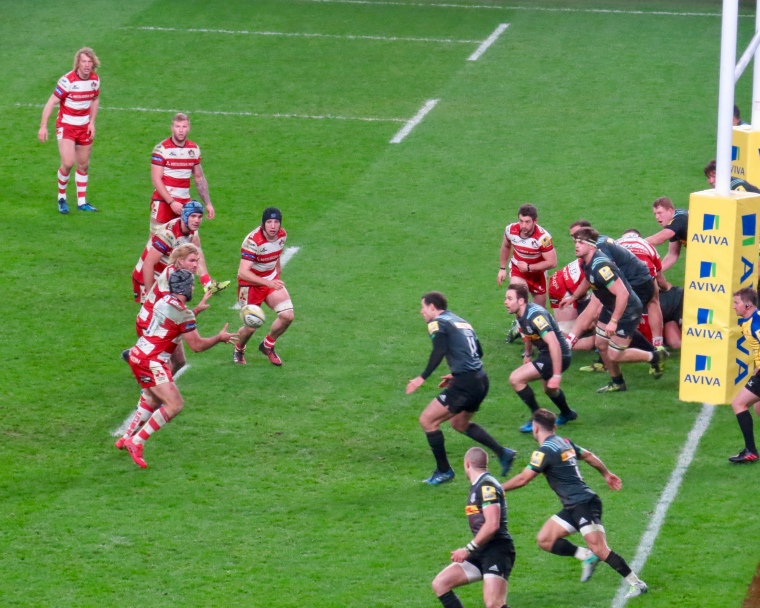 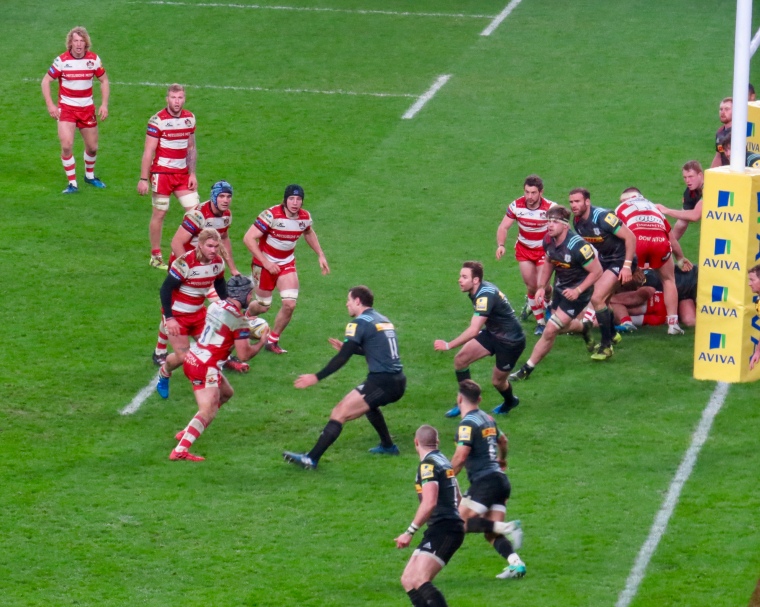 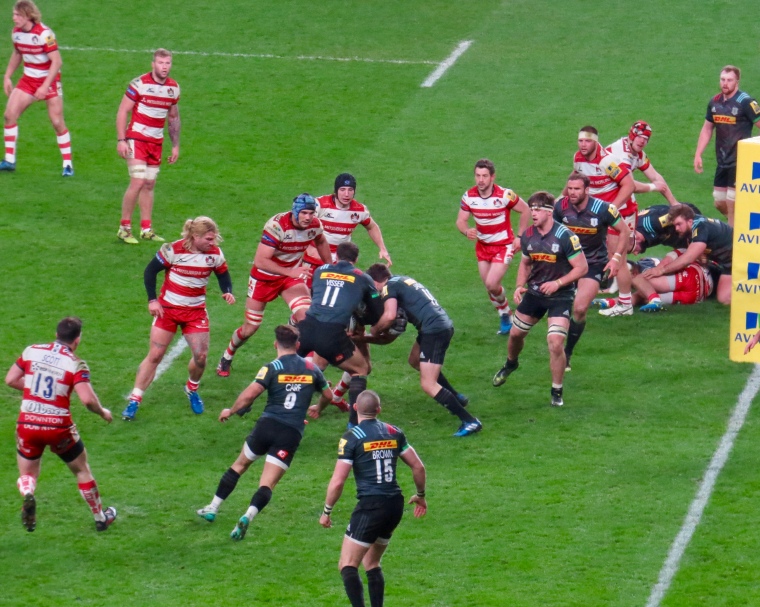 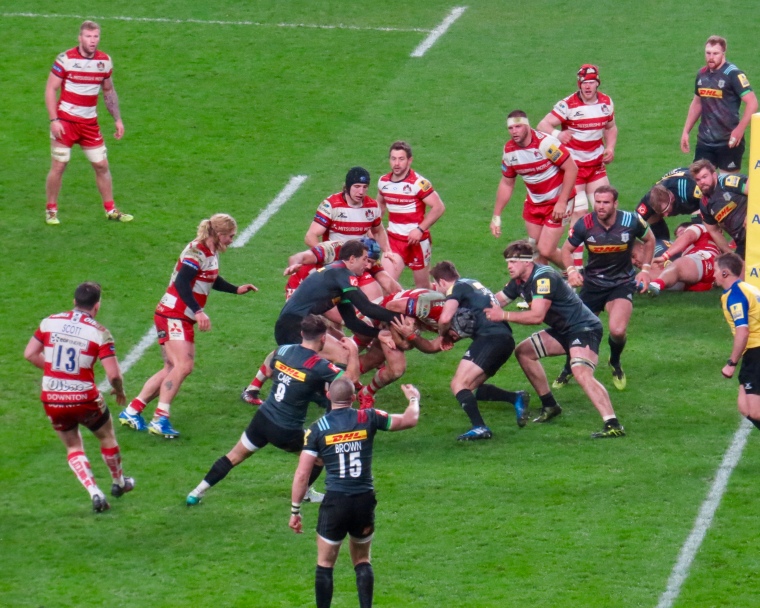 The second half redeemed the game Jack Clifford, another bright young England player touched down for Harlequins, Mike Brown had kicked the ball forward and a perfect bounce saw Clifford gather the ball to score, it’s becoming a habit for him in the Big Game.  Gloucester closed the gap and kept themselves in touch with a Gareth Evans try, duly converted by Laidlaw. 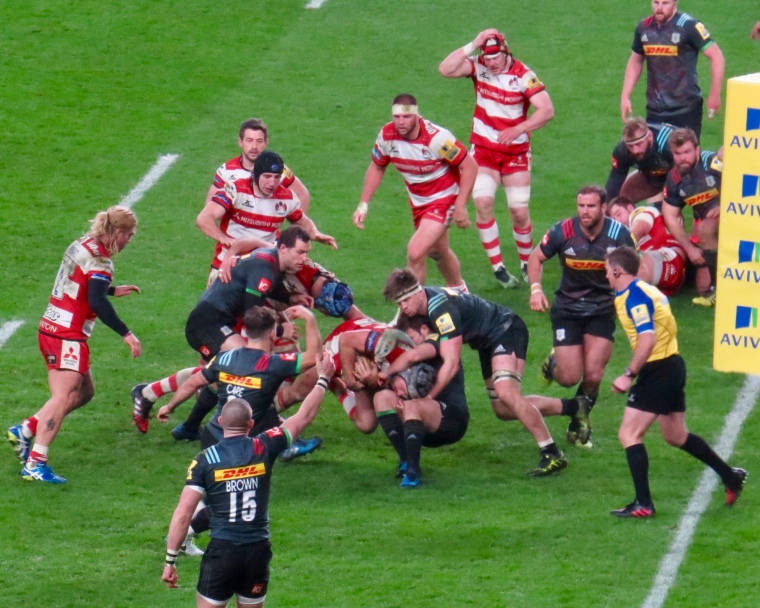 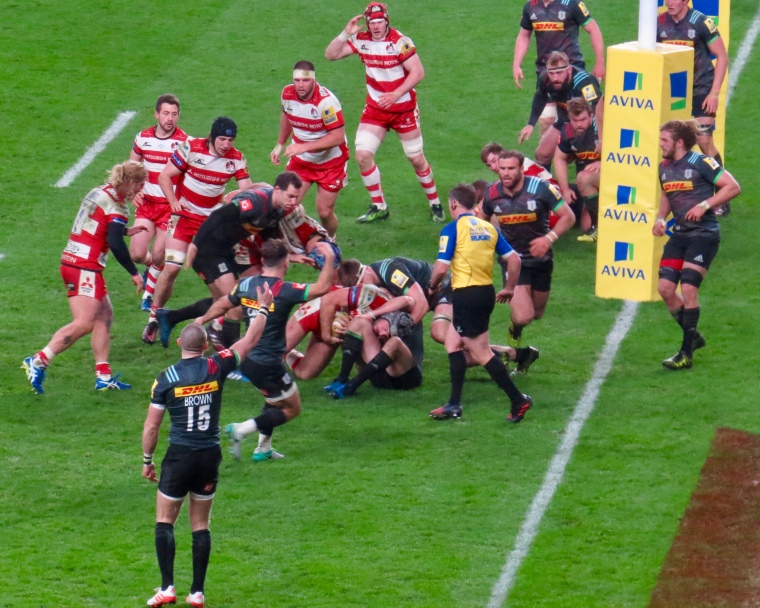 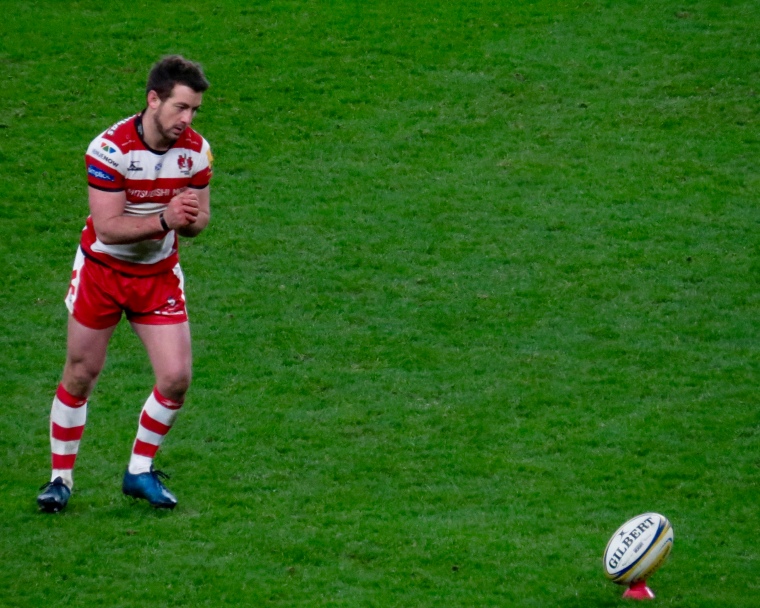 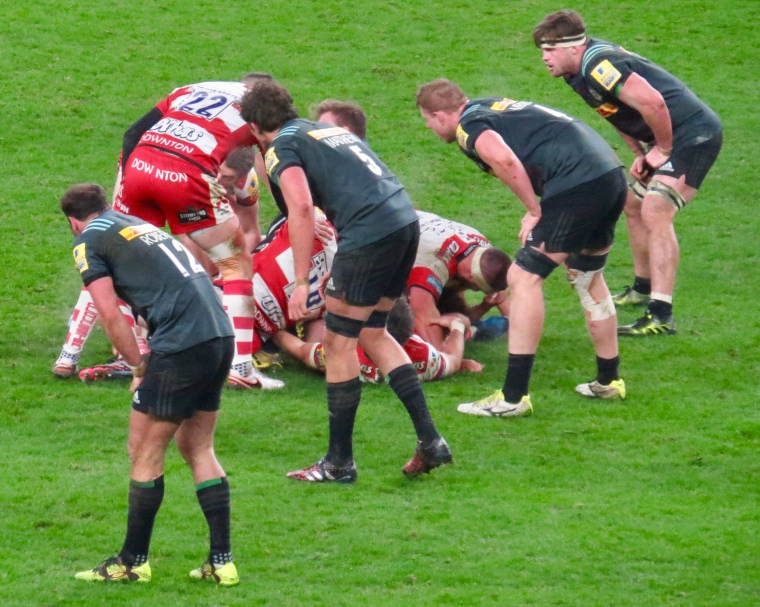 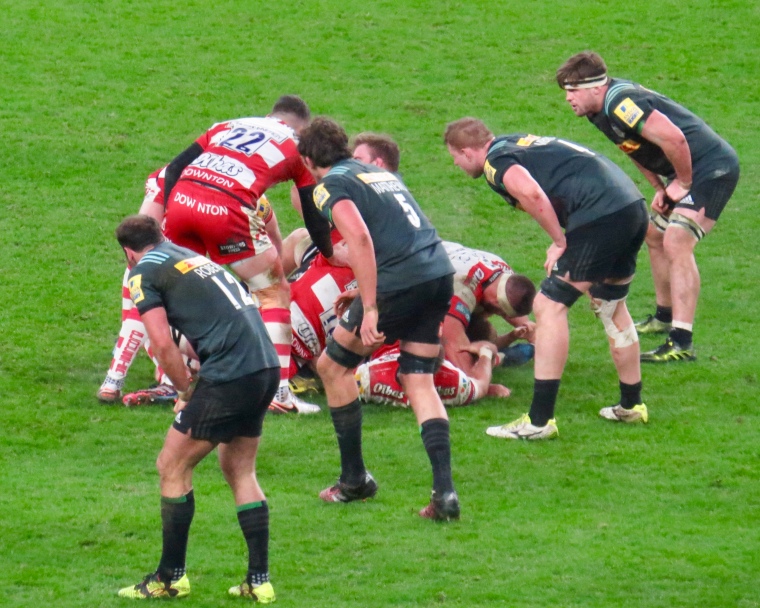 Joe Marchant scored his second try of the afternoon with 20 minutes remaining on the clock which saw the scoreline go to Quins 28 Gloucester 10, it looked like the game was out of sight for the visitors.  However James Hook had other ideas and scored for his team closing the gap to 11 points. 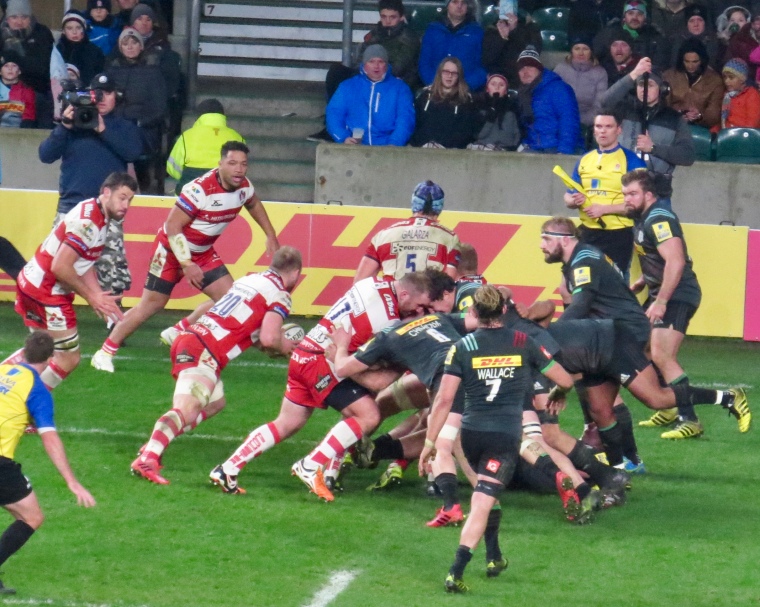 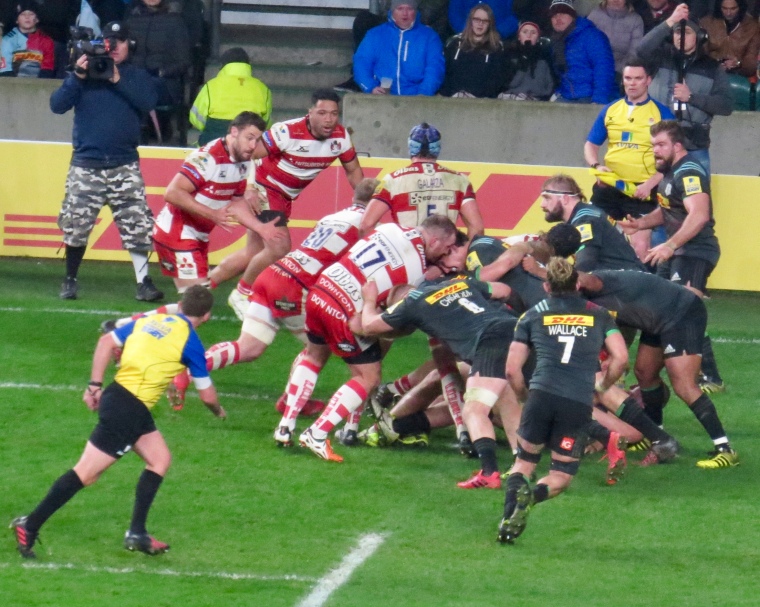 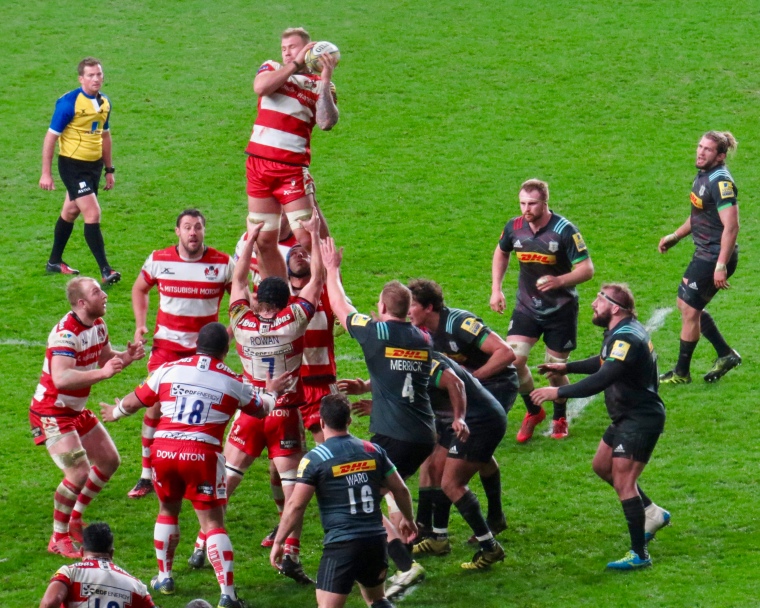 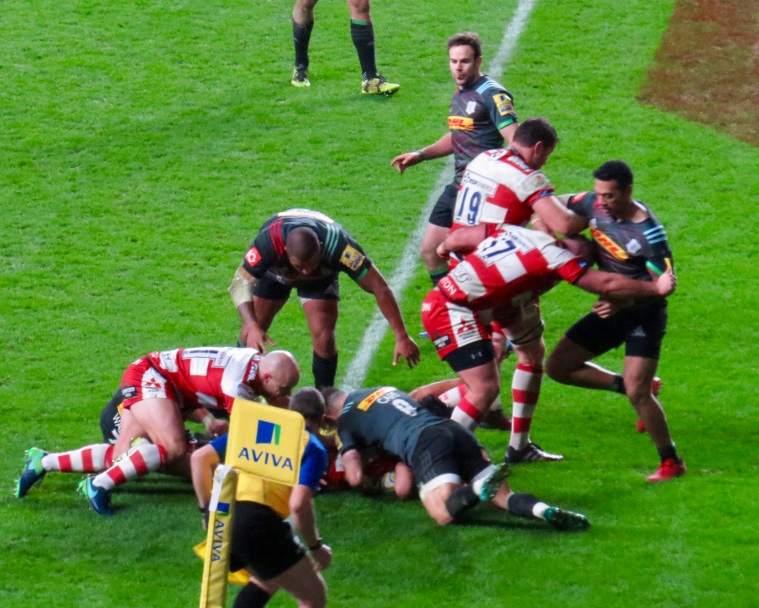 Jack Clifford was shown a yellow card, giving Gloucester a boost, the penalty was kicked to touch and Motu Matu’u crashed over the line to close the gap to 4.  Gloucester kept the attacking pressure up, Danny Care was lucky not to join Clifford on the naughty step as he hacked the ball out of a ruck from an offside position.  Had Gloucester closed out the game with a tap penalty against 13 men they may well have scored the try they needed to win the game, but JP Doyle who did put his arm out for the penalty allowed play to continue and Jonny May ran sideways instead of forward before losing the ball, allowing Danny Care to kick the ball out for the win for Harlequins.  Over 77,000 people came along to watch the Big Game, like me I imagine it’s become a must see game at Christmas for many. 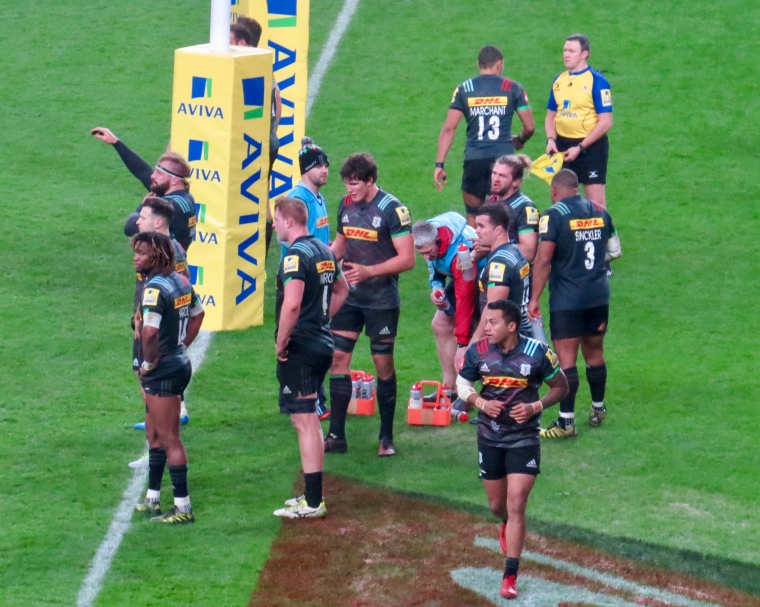 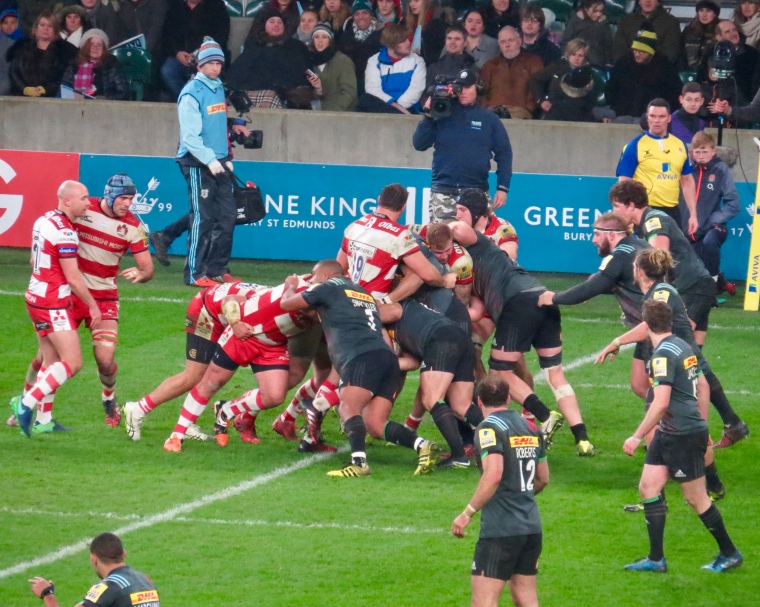 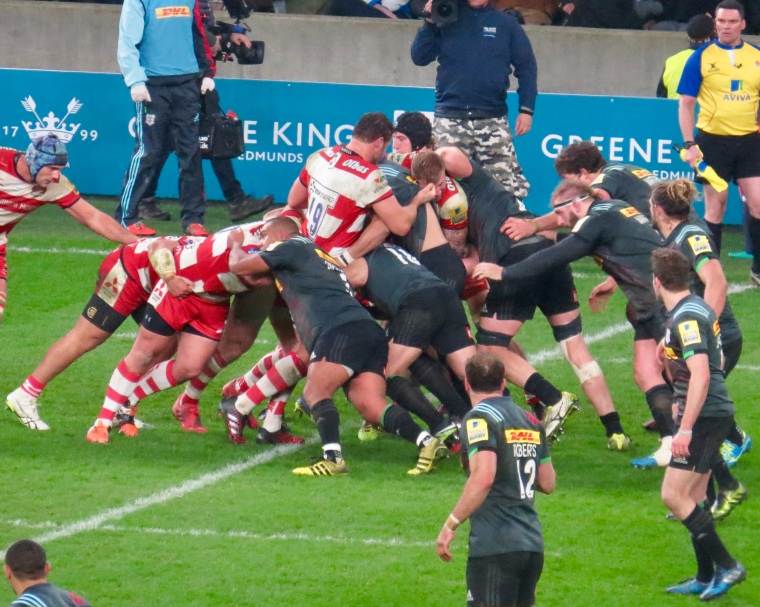 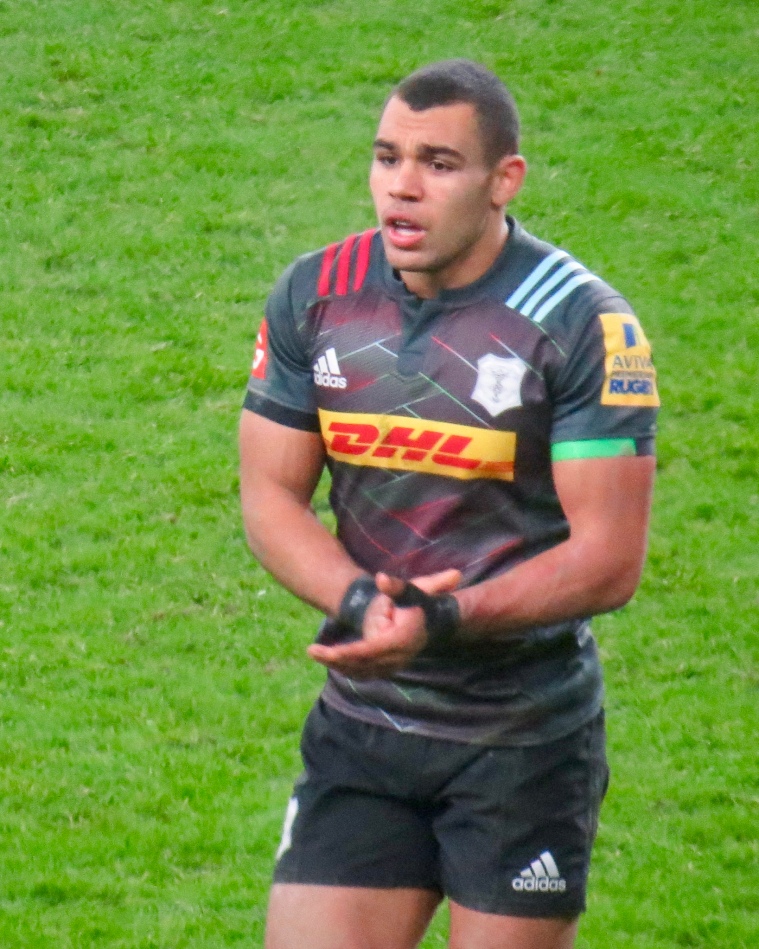 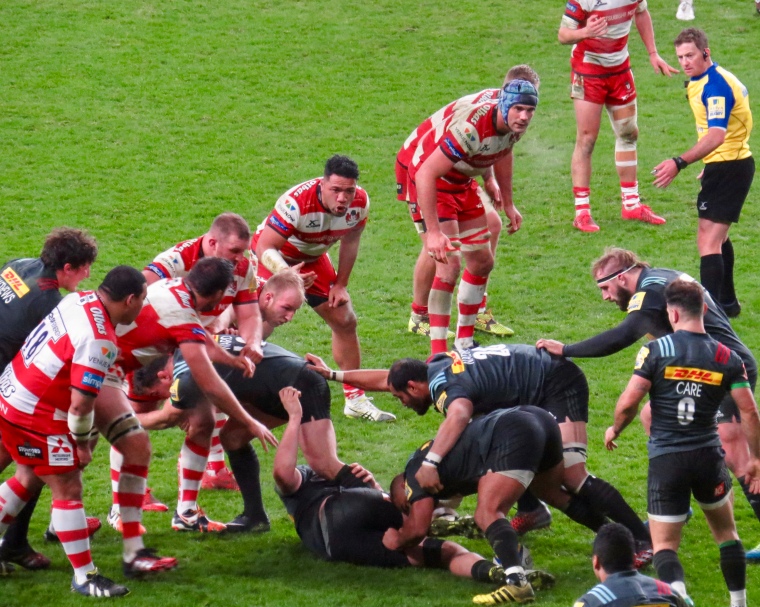