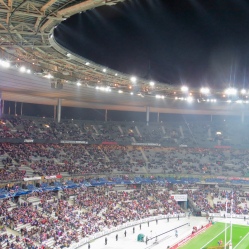 A love affair with the All Blacks that started back in the early 80’s and a daughter who lives in Paris sent me under the water (via Eurostar) to that beautiful city.  I’ve found it so much easier to get tickets for the Stade de France and have watched Australia, Scotland, England twice and 2 Top 14 Finals and added this match against the World Champions easily for 80 Euros a ticket. 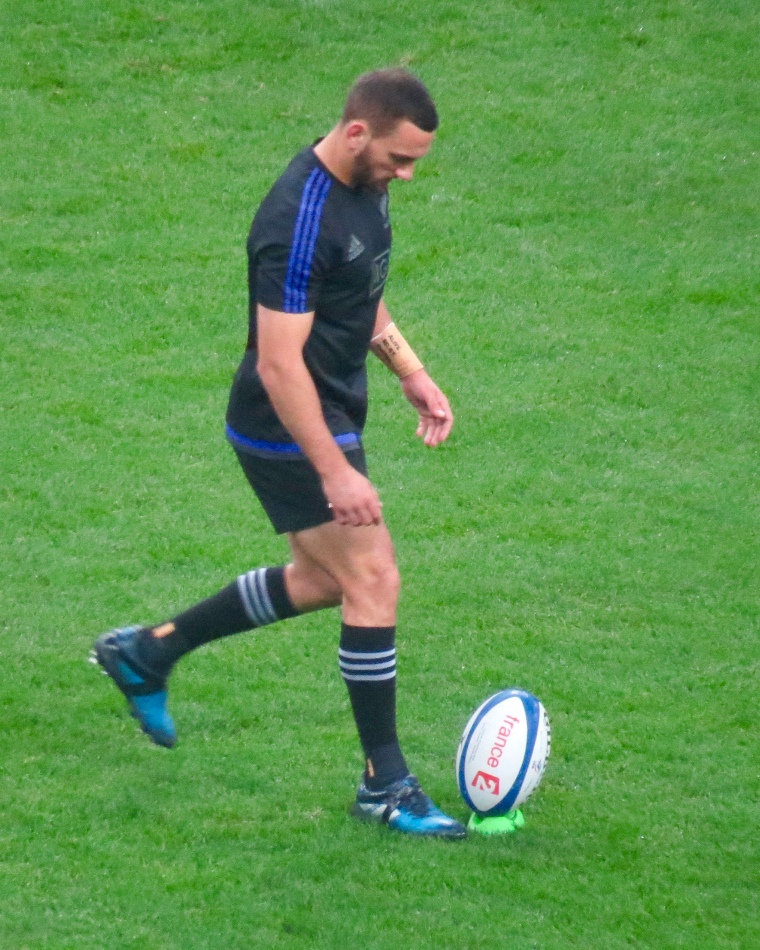 I travelled over on the Thursday before the game and had a couple of very relaxed days and time with Alexandra, my daughter which is always a delight.  We travelled from pretty much the centre of Paris to the Stade on the RER B, a civilised way to get there and so much better than the Metro.  The security was strong as you’d expect bearing in mind that had happened a year earlier, but, we arrived in our seats nice and early. 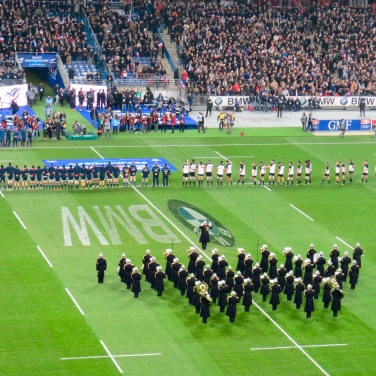 I have to be honest and admit I was expecting a big win for the All Blacks, I’d been in Cardiff for the quarter final between the two which ended All Blacks 62 France 13.  That game had seen Louis Picamoles, one of France’s world class players sent to the sin bin for 10 minutes with the score on AB’s 24 France 10.  It would be vital for France to have 15 men on the pitch at all times.

Disappointingly the All Blacks were more, A bit of black, with just the top of their shirts being black but the majority being white.  Perhaps the black would have clashed with the rather snazzy blue top worn by the French, but it just didn’t look or feel right.

The atmosphere at the Stade de France is second only to the re-badged Principality Stadium, we had a DJ playing in the build up, getting the partisan French crowd involved with a few Mexican Waves, all fine before the match actually starts.  The anthems were accompanied by a band and as always Les Marseilles was sung with gusto, including by Alex.
At the first attempt at writing I forgot to mention the Haka, a magical thing to experience. The French crowd did respect it, but wow they cheered as their team walked towards the All Blacks (in white) as the ritual progressed! 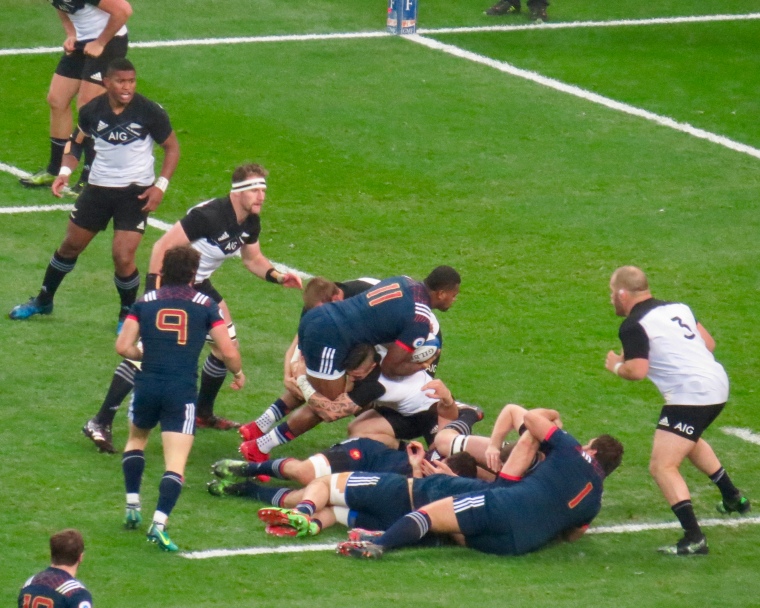 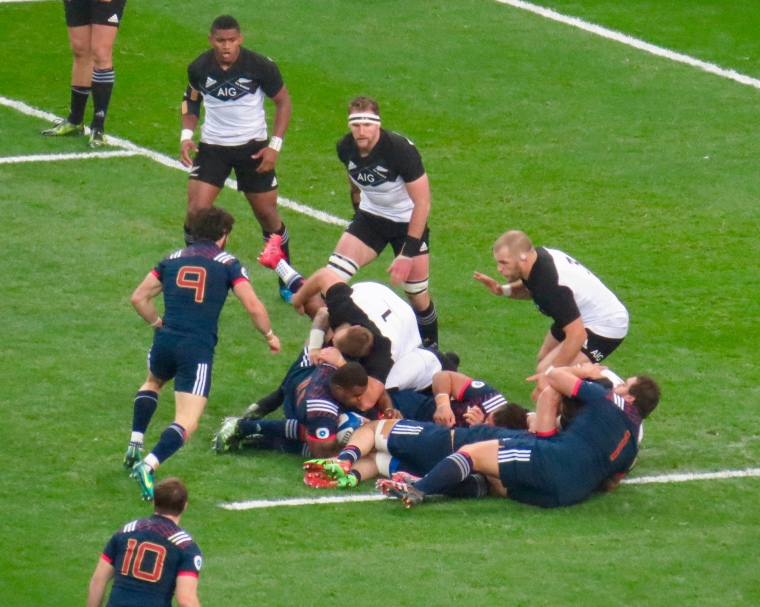 As a rule over the years I’ve supported the All Blacks other than against England, but some very nasty interactions online with a handful of their fans in the week before the game as well as some press questioning that line this supremely talented team have played close to had me leaning towards France.  They are another team I’d seen at Twickenham in my early days of watching England when the likes of Jean Pierre-Rives and Serge Blanco played in a team that delighted with their style, playing exciting rugby.  That time seemed a long way off as far as France in 2016. 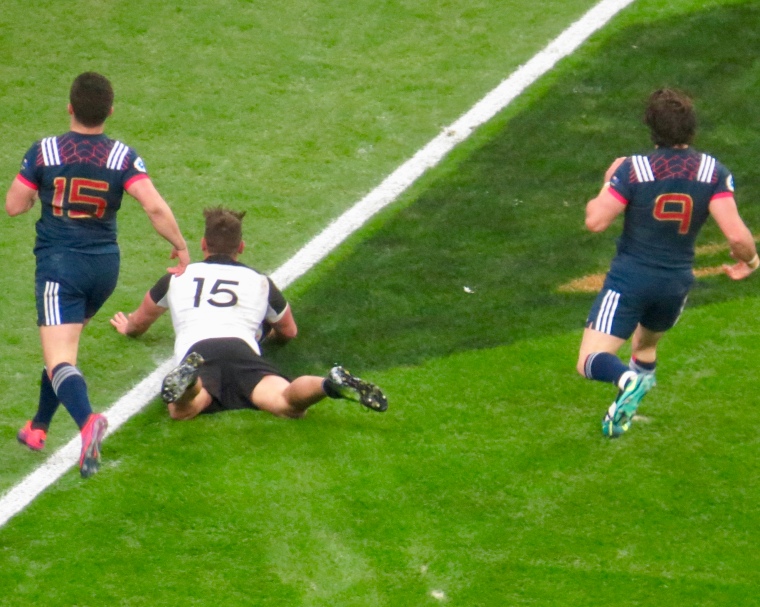 Except, with the second world class Frenchman Maxime Machenaud at 9, Camille Lopez at 10 and the superb Picamoles at 8 this team played some wonderful rugby!  They had to reshuffle early on as Wesley Fofana went off for an HIA, which them became a permanent replacement, enter Gael Fickou a more than adequate substitution. 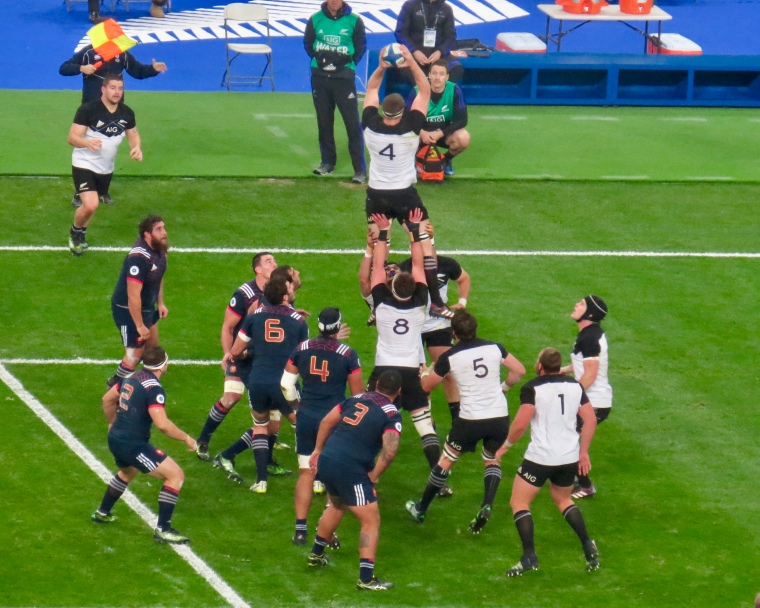 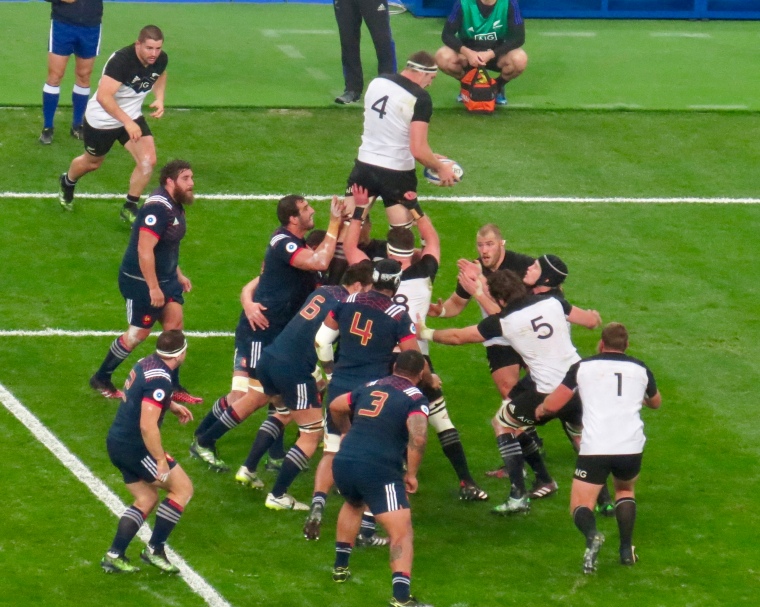 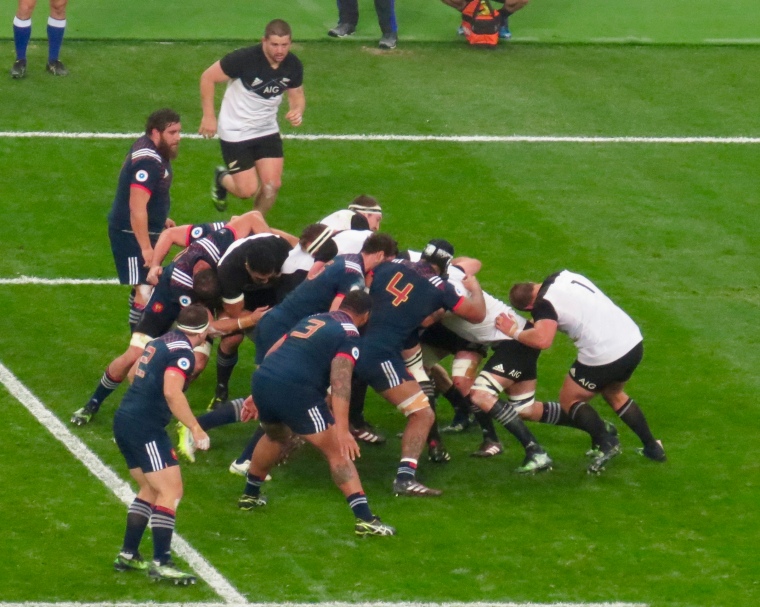 The All Blacks had World Player of the Year Beauden Barrett at their helm and he put a superb kick in for Julian Savea over the top of the French defence, Savea passed the ball to Israel Dagg who ran in for an easy try.  It was against the run of play but a delight to watch.  Barrett converted, then added a penalty ten minutes later to put the All Blacks 10 points ahead. 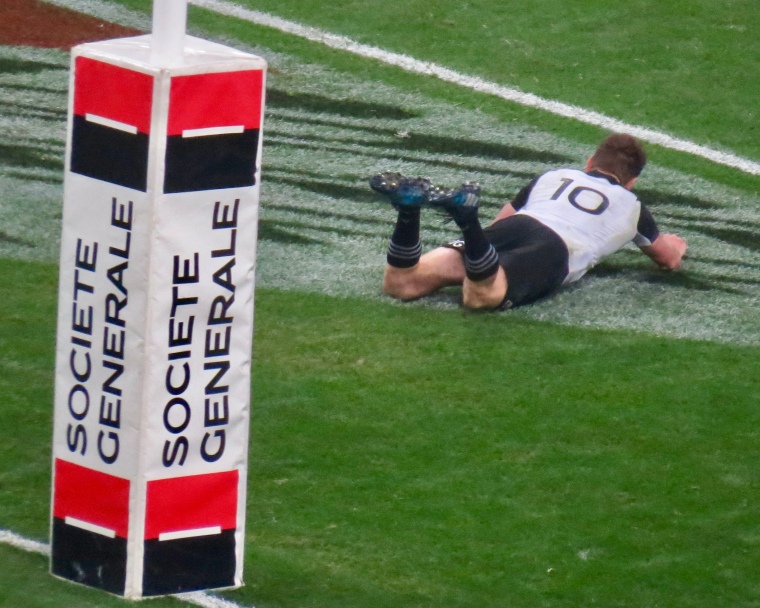 France were playing that running rugby they were so revered for, but couldn’t make the metres made count, they lost 5 of their own lineouts, school boy errors you really can’t afford to make against the number 1 team in the world.  As far as stats are concerned France dominated in attack on all but the scoreboard. 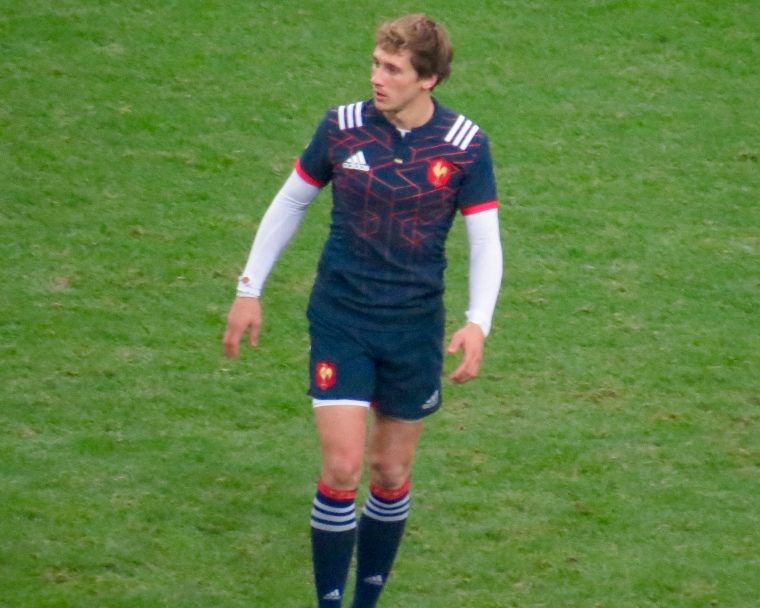 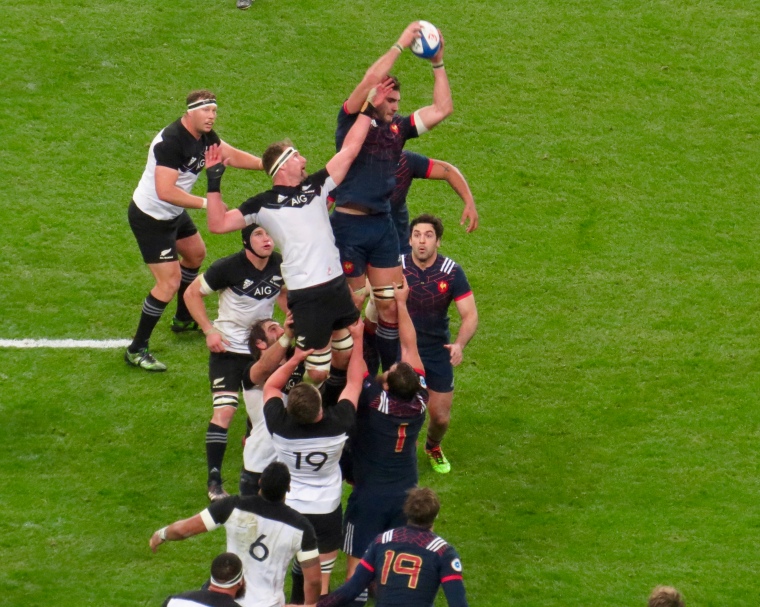 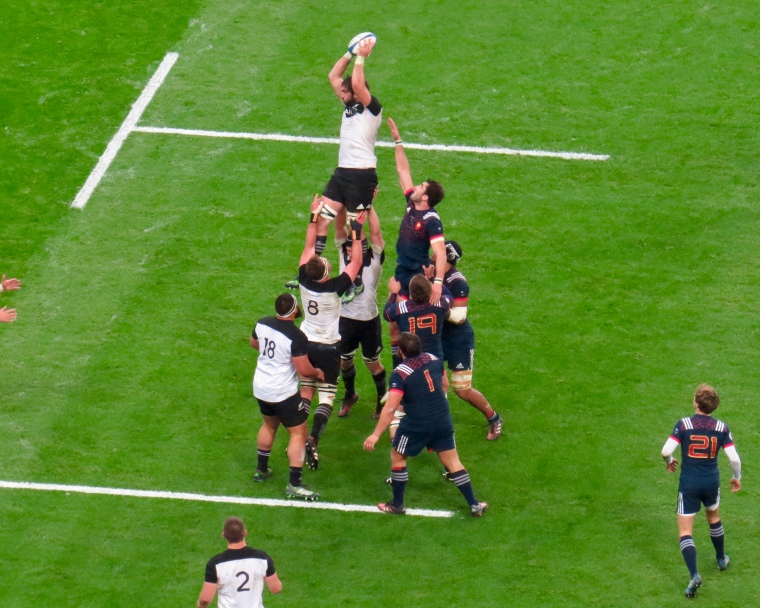 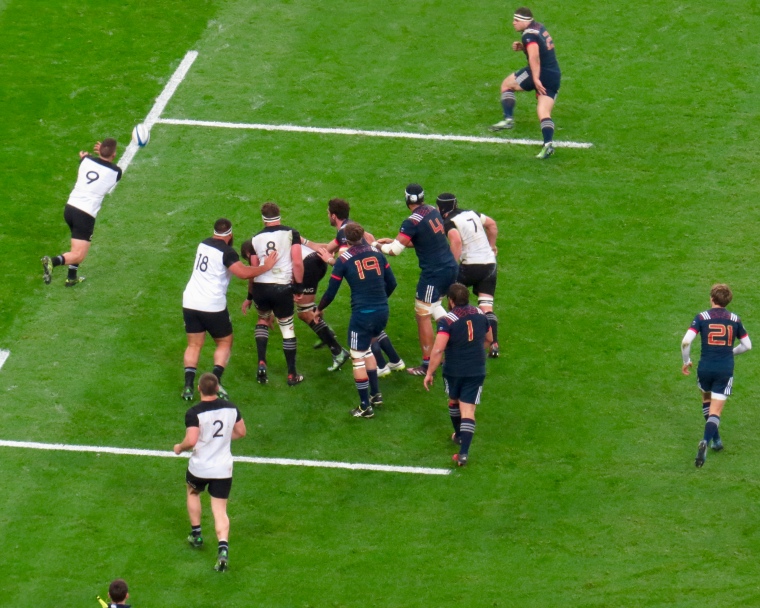 all key stats that tell you that France dominated the play, if you like, they Out All Blacked the All Blacks,  However another key figure being Turnovers conceded with France at 20 and the All Blacks at 9 perhaps is an indication of why all that good possession didn’t convert into tries. 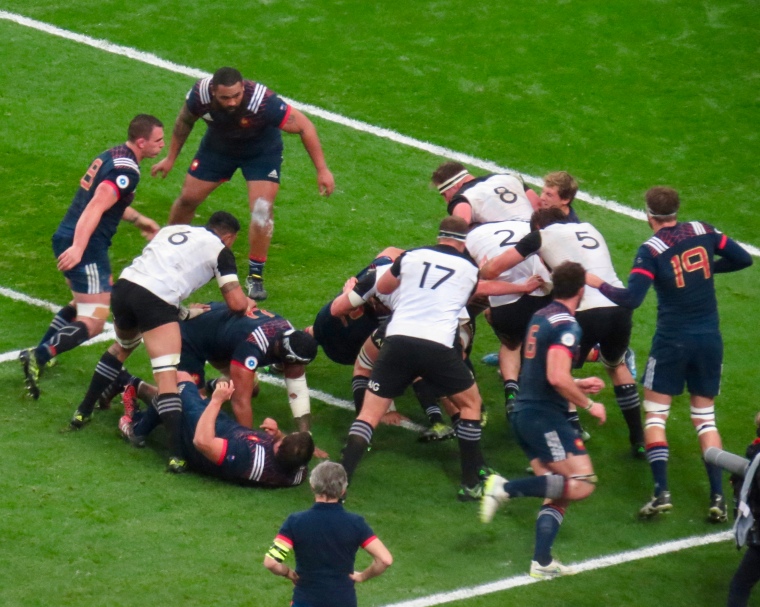 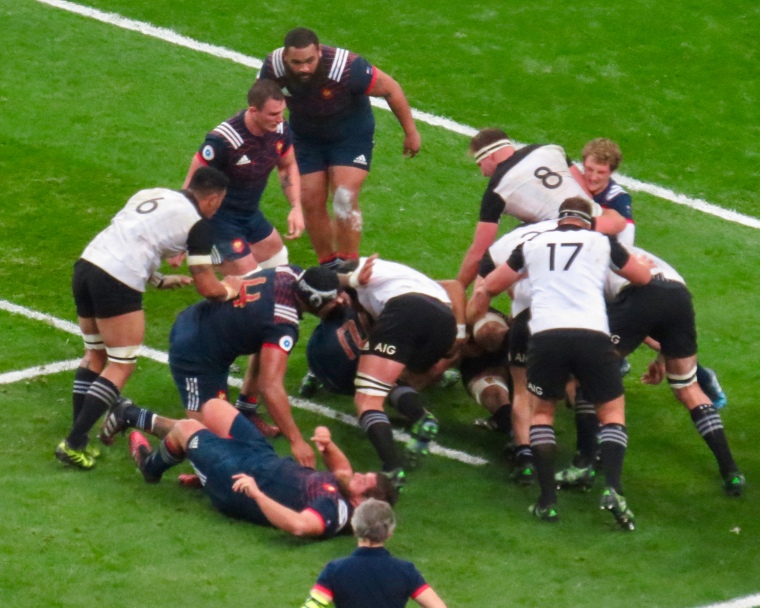 Every time it looked like the French would convert their possession into points something went awry, there seemed to be a lot of dropped ball, no doubt the strength of the All Blacks defence had a great deal to do with that fact, but wow it was frustrating!

All France had to show for their first half efforts were 2 Machenaud penalties, but they kept them in touching distance of the All Blacks. France 6 All Blacks 10 at half time.

3 minutes into the 2nd half and another strong French attack saw them get very close to the All Blacks line, before the final pass went to one Beauden Barrett, who with a turn of speed the wonderful Dan Carter (sitting watching in the stands) didn’t possess, ran 95 metres unimpeded to score a try he easily converted to take his team to 17 points. 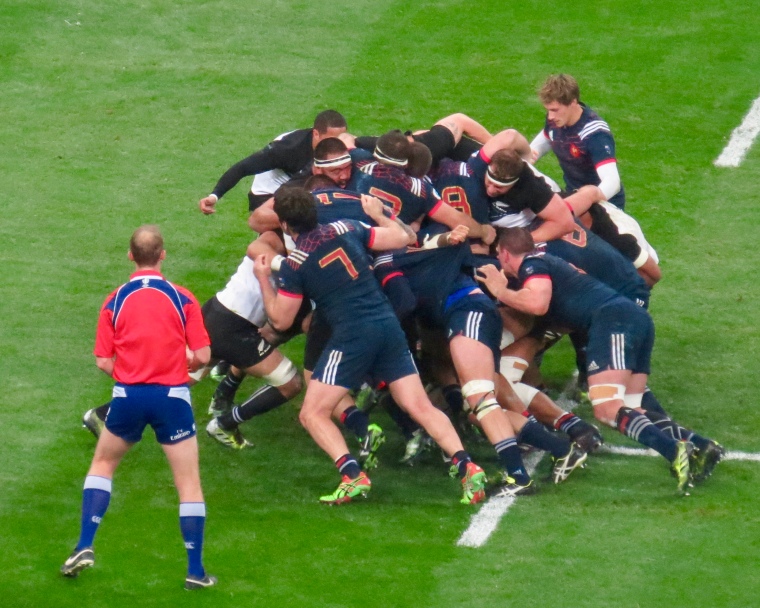 Machenaud had been substituted by Baptise Serin, a player I knew nothing about but certainly would by the end of the match.  He converted a difficult penalty to close back the gap before Charlie Faumuina crashed over the French line to score a simple 5 points, the inevitable Barrett conversion took the All Blacks to 24.  That felt like an unassailable lead but the French had different ideas.

A quick tap penalty taken by the sublime Serin saw him flick the ball to Picamoles who flew over the line to the delight of the crowd, Serin converted the try before putting a penalty between the posts after Aaron Smith, who’d been on a bit of wind up was penalised.  Those 2 scores took the final result to France 19 All Blacks 24, had the French got more right on the basics they may well have got the win they deserved.

Aaron Smith kicked the ball out once time was up, the crowd were displeased with that and showed it, it wasn’t good to see one of the All Blacks forwards waving his arms as if to say ‘bring it on’  that’s not the kind of attitude I associate with this team.  I think the love affair may be ebbing with this new look team. 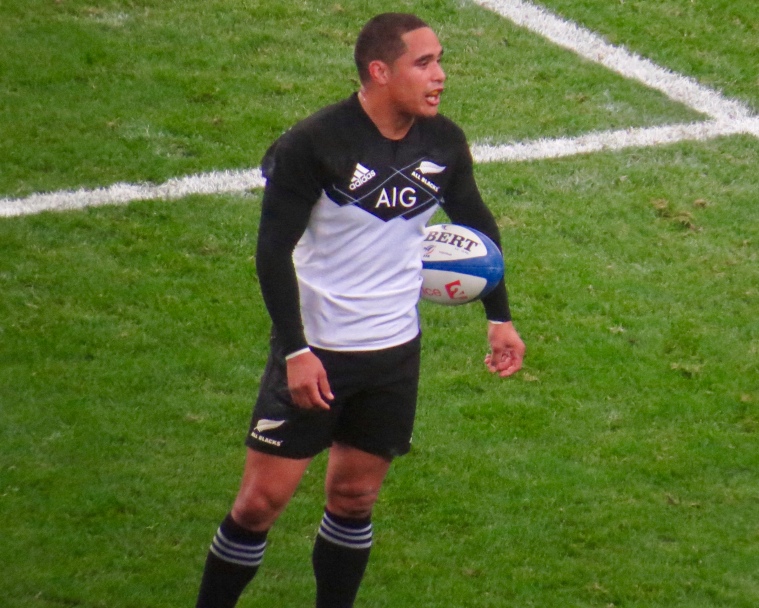 A quick mention for Aaron Vruden who came on for Israel Dagg, he added a real dynamism to the All Blacks back line, showing the advantage of having two fly halves on the pitch.

It’s a shame that England don’t face the All Blacks this Autumn, they are very clearly still the number 1 team in the World but there’s a vulnerability on show.  Similarly this French team look like the France of old, if they can cut down on the silly errors they’ll be a challenge come 6 Nations time.