Day 5 of the Final Test, an unusual event as a rule!  This was to be virtually a whole day too.  Those who’d bought tickets at the last minute for […]

Day 5 of the Final Test, an unusual event as a rule!  This was to be virtually a whole day too.  Those who’d bought tickets at the last minute for Day 4 had been served up a real treat and Day 5 was non too shoddy either!

Jimmy Anderson was hunting a record, but Joe Root failed to bowl him for most of the day, which was a bit strange.  In fact his whole bowling set up was all rather strange. 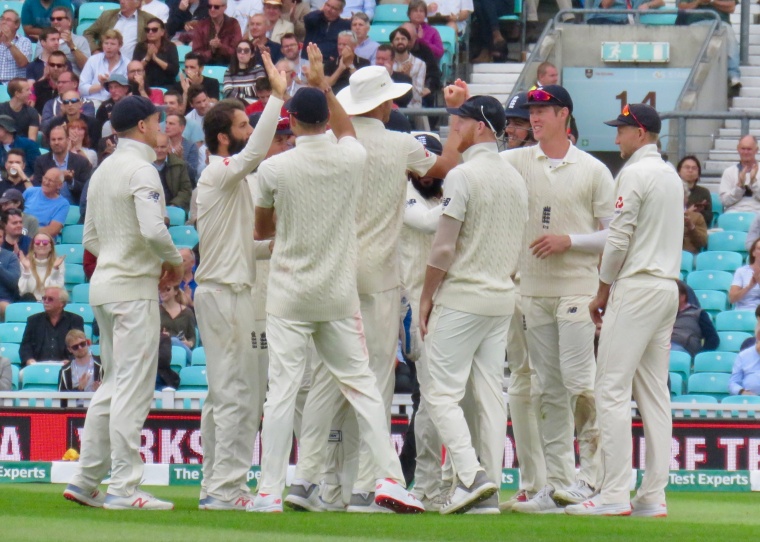 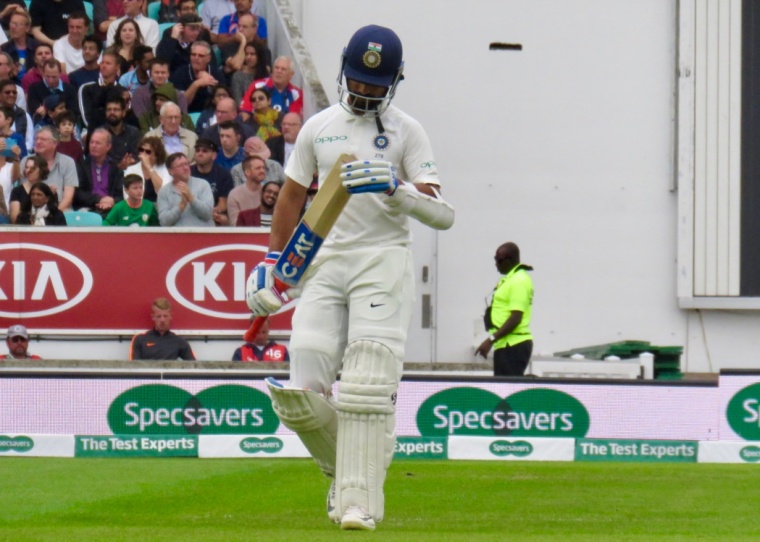 India started the day on 58 for 3 Kl Rahul and Rahane came out to bat in a bid to either win or save this match.  This pairing put on 118 before Moeen had Rahane caught by Keaton Jennings for 37.

Hanuma Vihari wasn’t to repeat his performance from the first innings, England had bowled 32 overs with no wicket but Ben Stokes took Vihari’s wicket in the next over, he was caught by Bairstow for a Duck.  That aside this had been a memorable test for the debutant.

In came Rishabh Pant, I was sitting with my friend Lesley and felt he’d throw his wicket away in spite of the fact he’d batted rather wildly in his previous innings.  However he showed the reason he was in this team, at The Oval.  His First Class average is just over 50 and he came into this test set up with a highest First Class score of 308.  He opened his account at Trent Bridge with a straight 6 into the pavilion, this lad can hit a ball! 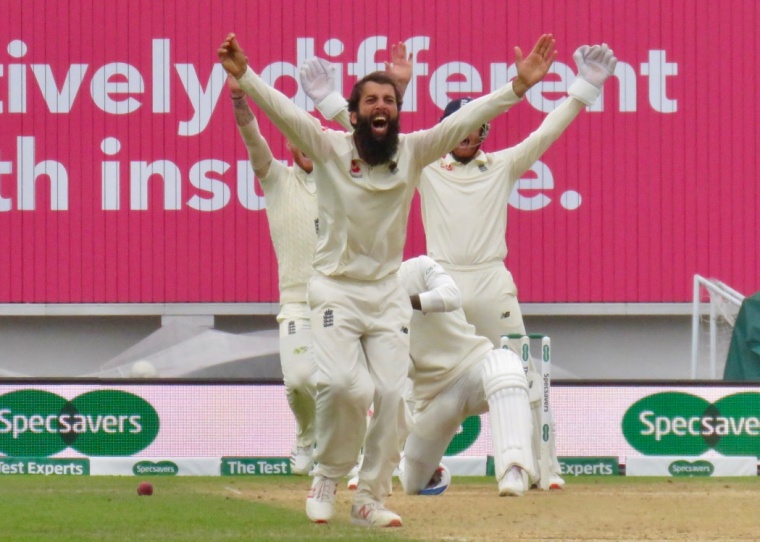 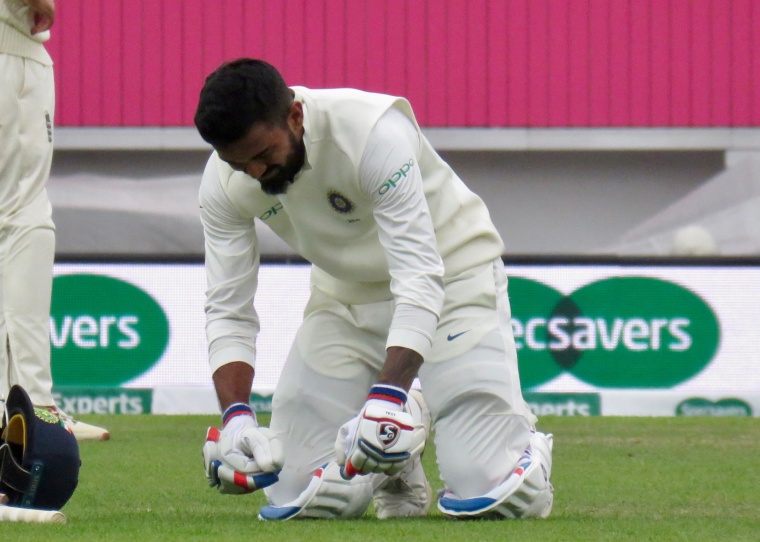 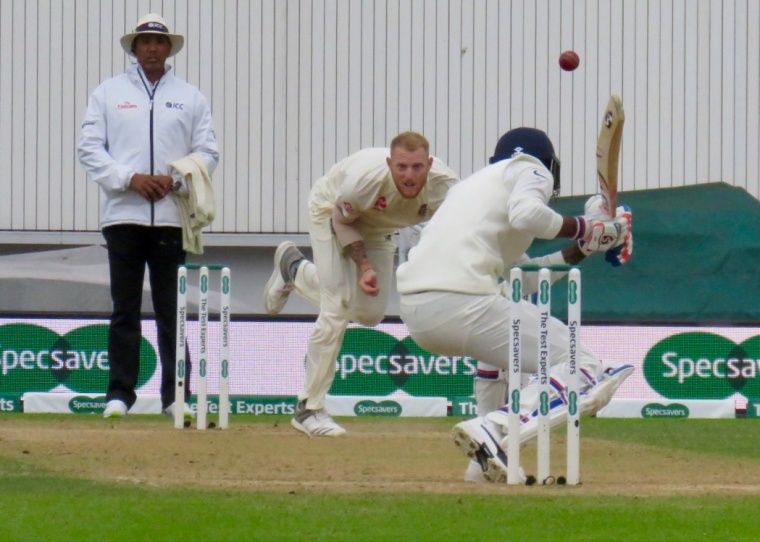 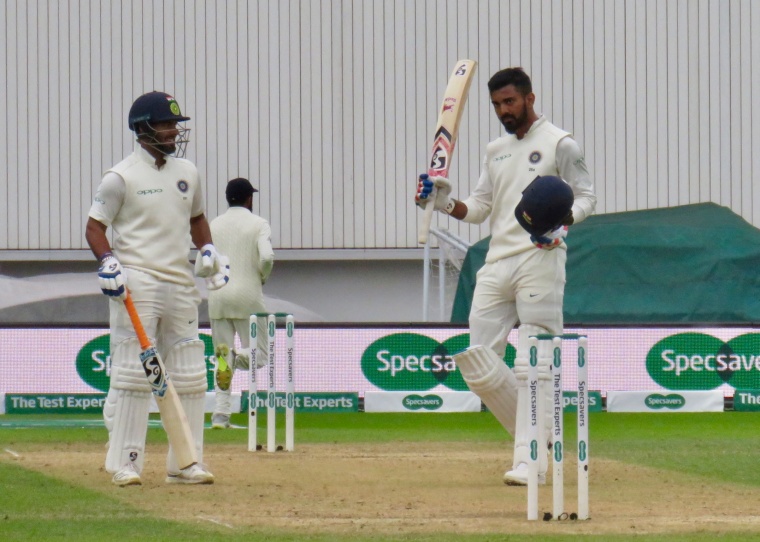 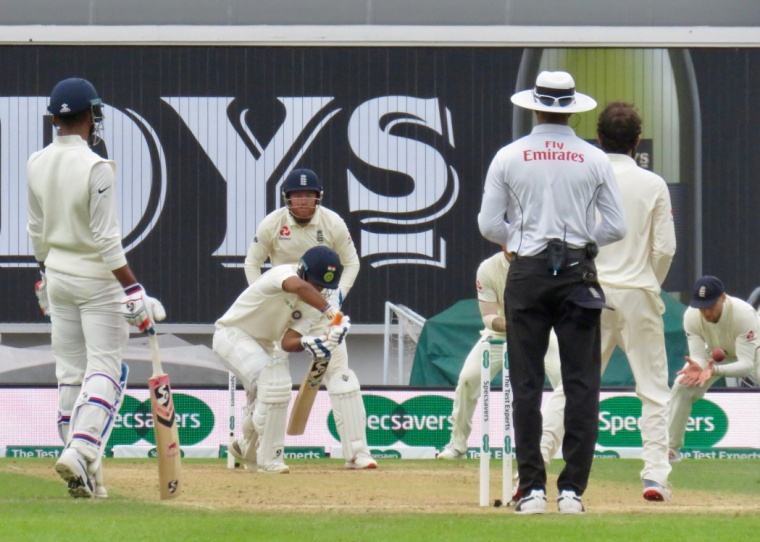 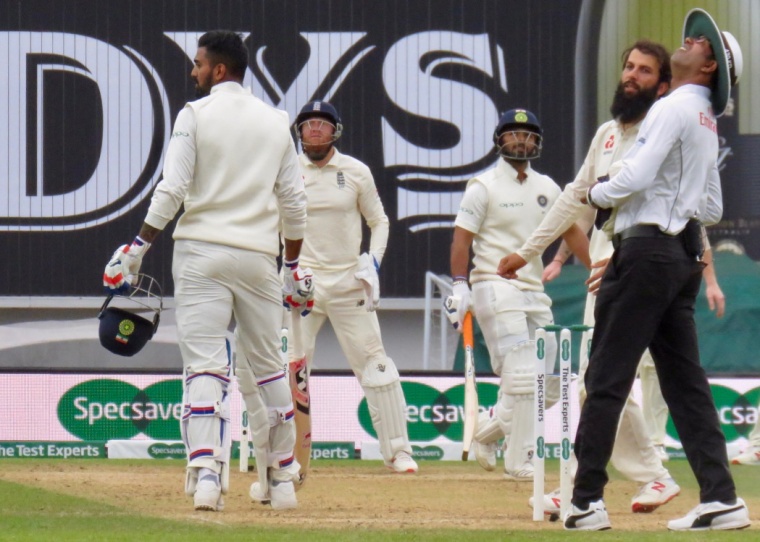 KL Rahul was still at the crease, it became plain this day wasn’t going to be over in a hurry.  The pair not only frustrated the England bowlers, they put on 204 runs.  Joe Root’s use of his bowlers was puzzling, he bowled himself at one point, setting a far more attacking field than he did for his front line spinners. 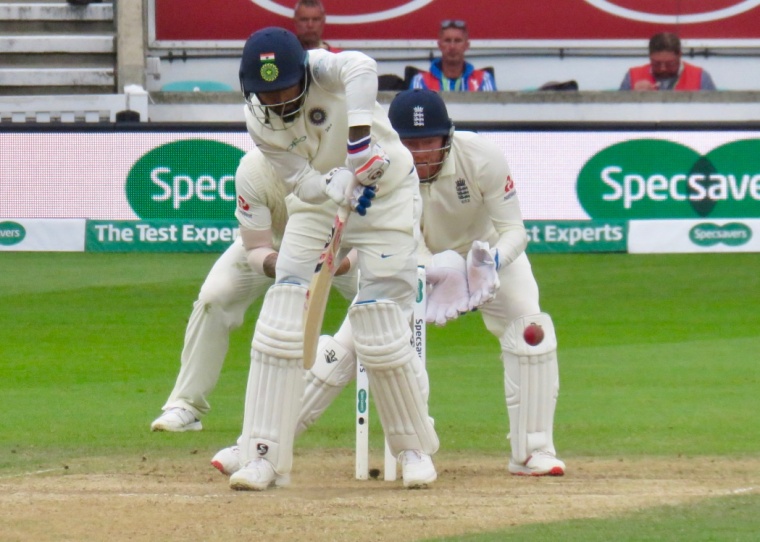 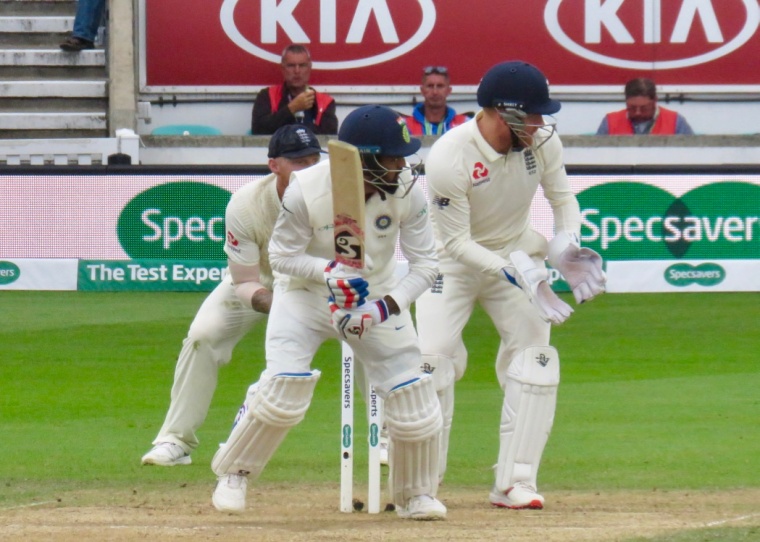 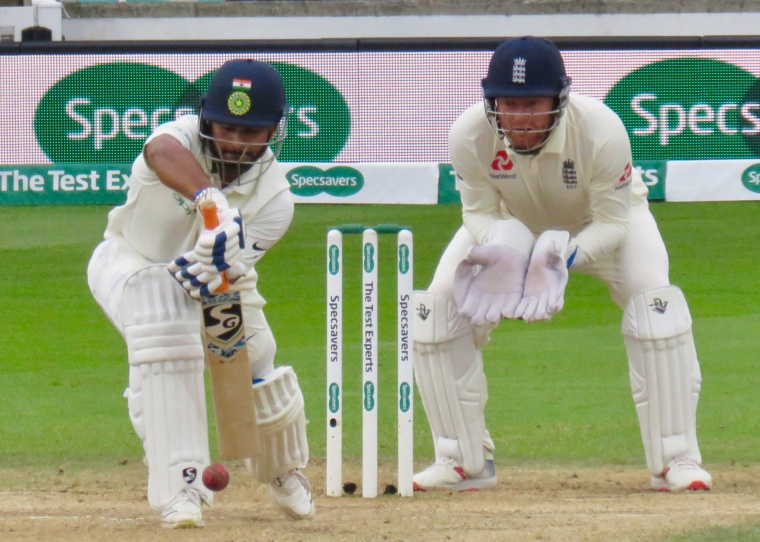 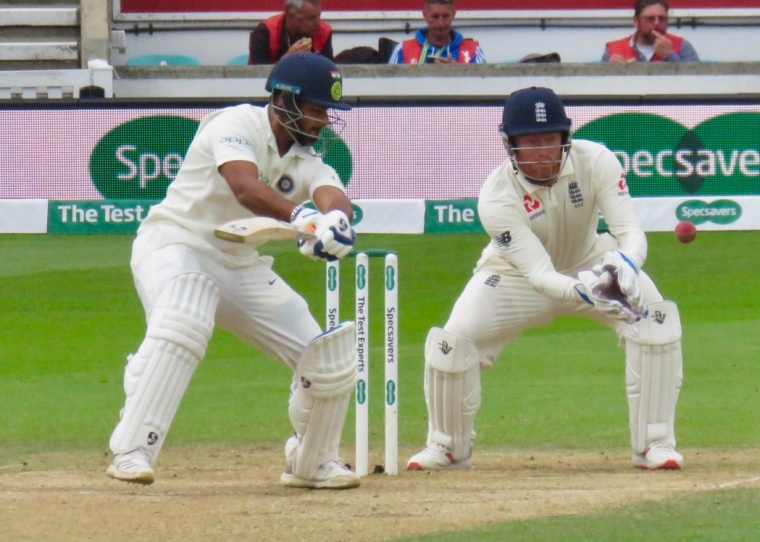 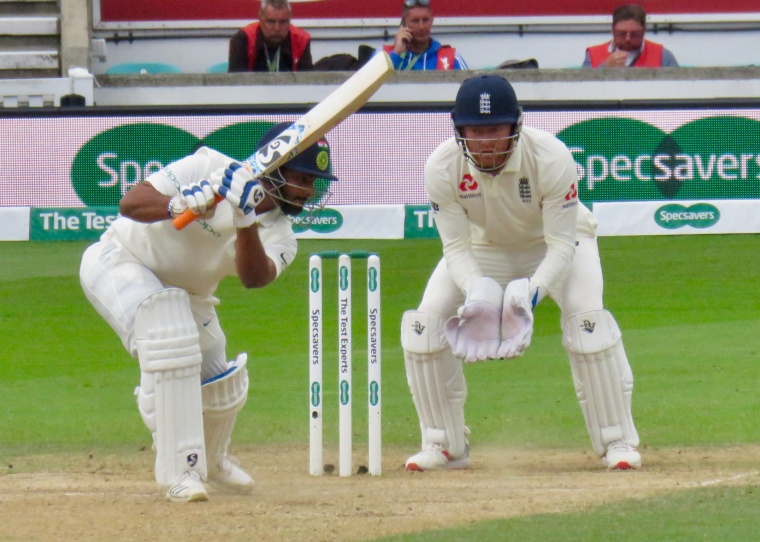 Rashid finally came into play in this final test, England didn’t take the new ball as he was getting some turn, Anderson had barely bowled but found himself bowling with a well used ball.  The decision did however work as Rashid completely bamboozled Rahul bowling him, the wicket fell in the 82nd over.  He’d batted for nearly 6 hours, faced 224 balls and scored 149 runs.  His was a superb innings, he and Pant had many, including me, thinking India might actually pull this run chase off! 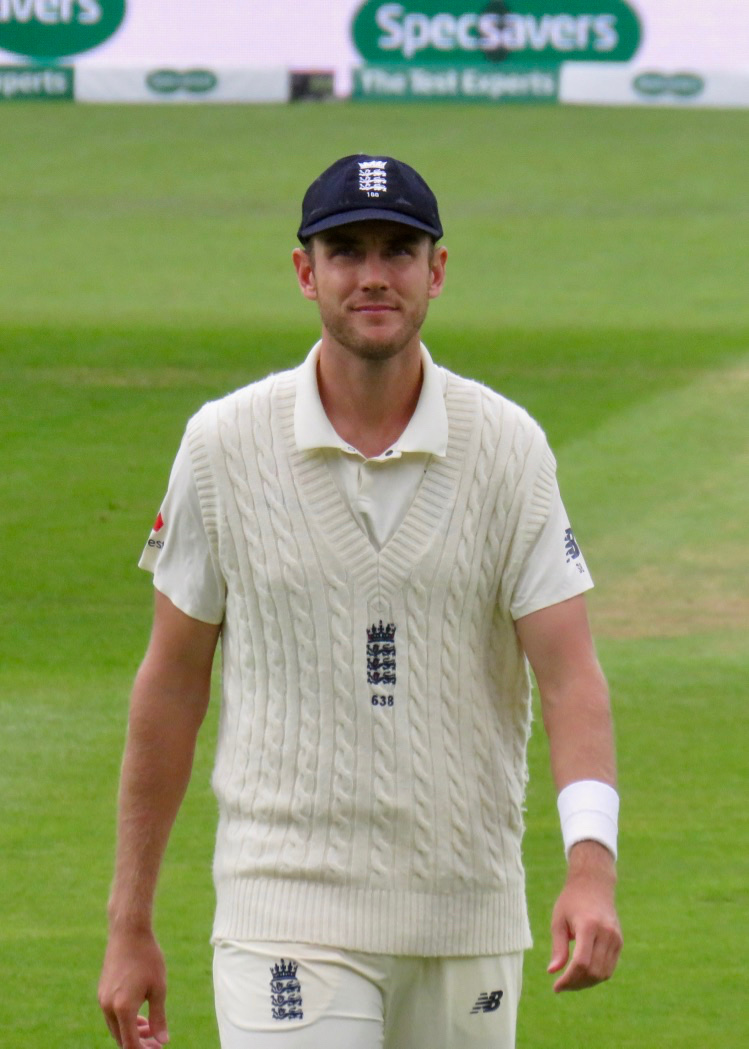 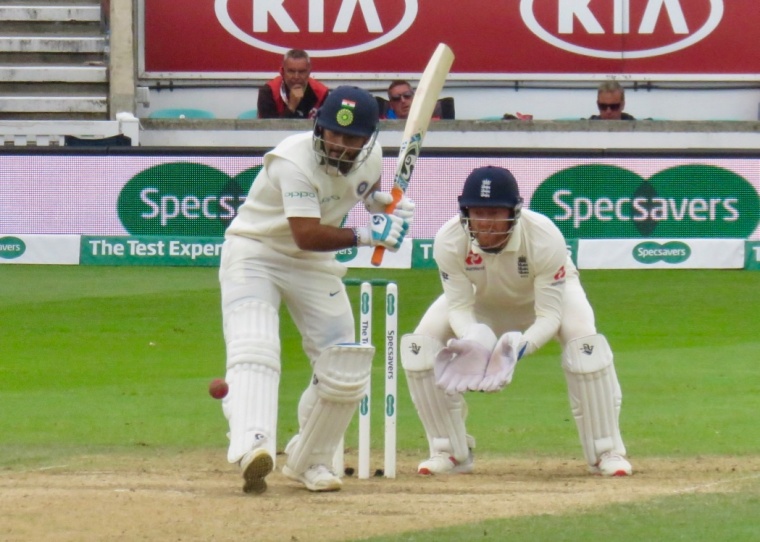 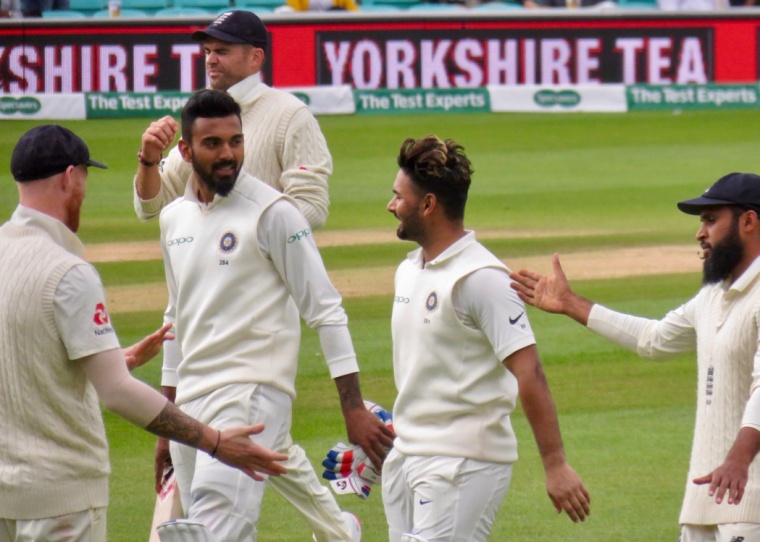 In common with Vihari in the England innings, Rashid also took the other big hitter, not in consecutive balls but in his next over.  Pant did eventually play a bad shot to Rashid and he was caught for 114 by Moeen Ali.  India were 328 for 7. 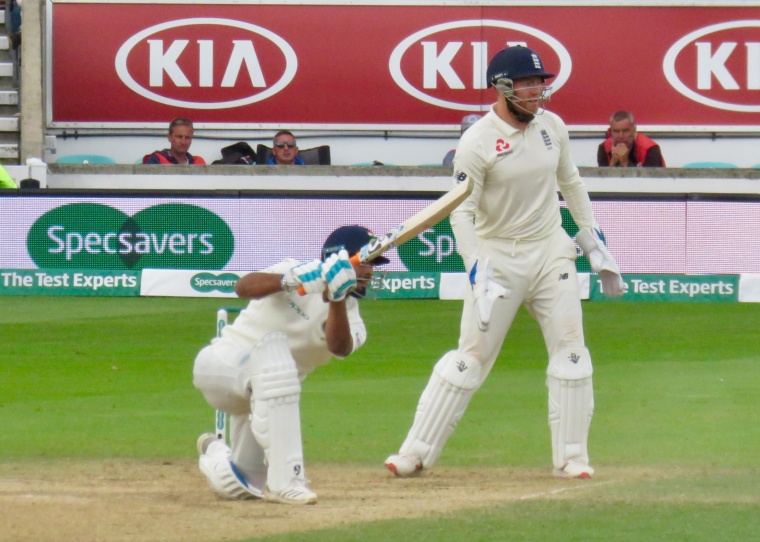 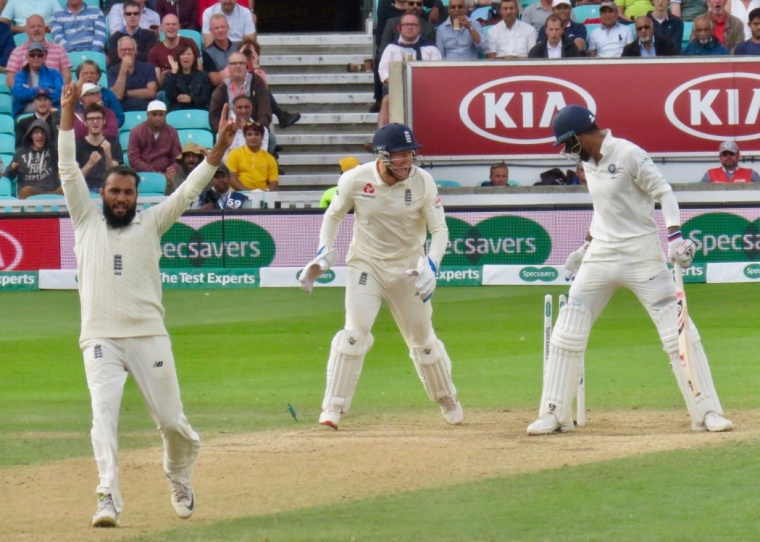 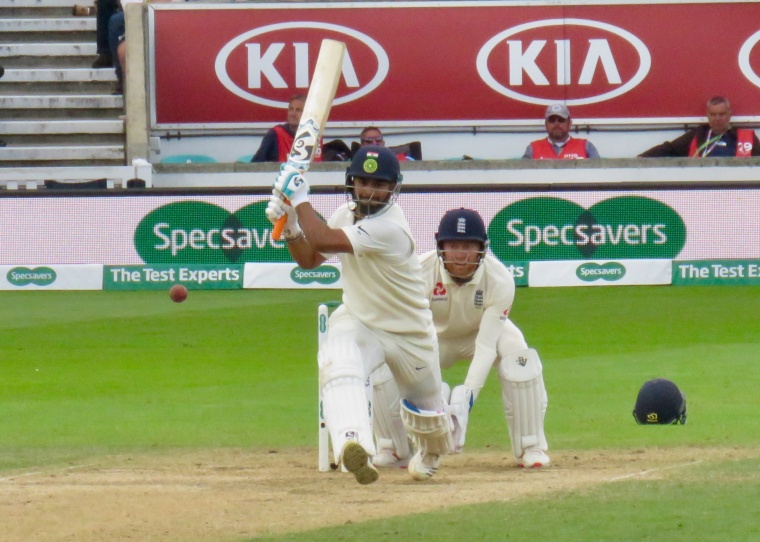 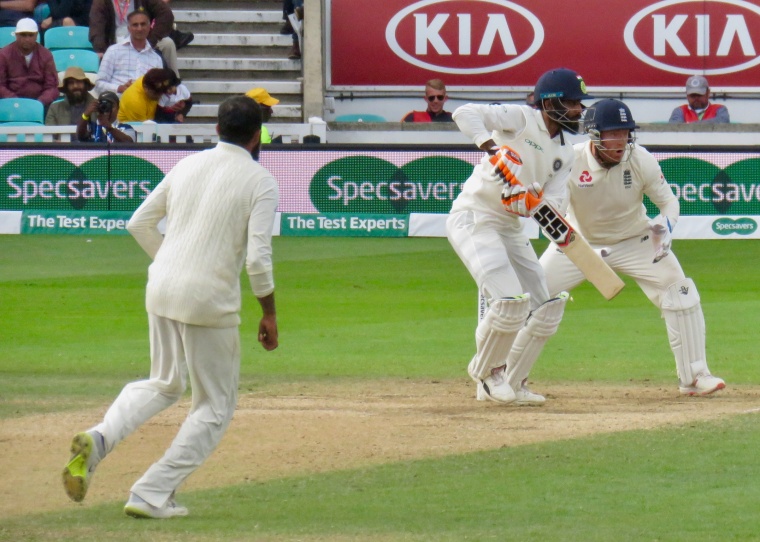 With the 2 key wickets taken the new ball was taken, it was good to see Sam Curran with that new ball in his hand, it’s the role he takes for Surrey.  Jadeja was in so there was still some hope for India as the time was moving on, it was unlikely now that the match could be lost by England, but could they win it? 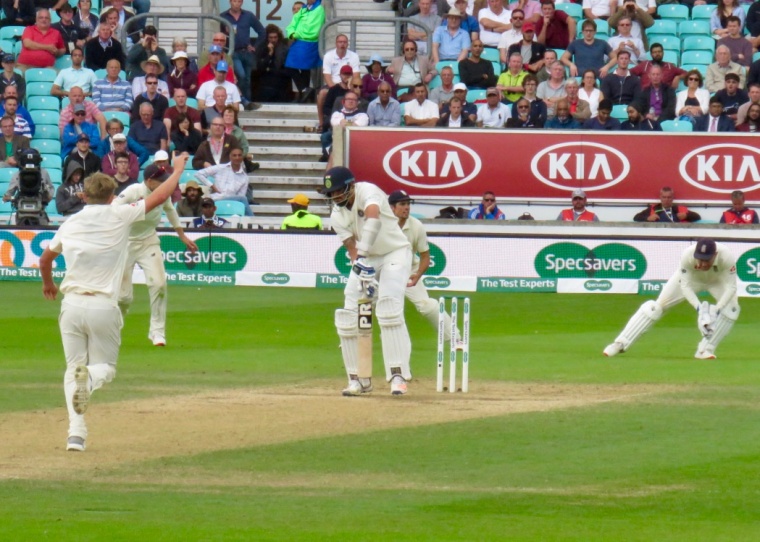 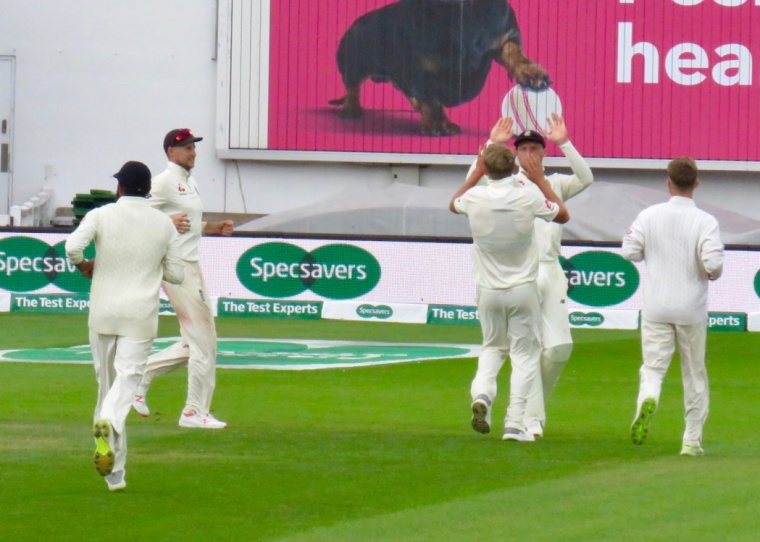 Sam Curran struck in consecutive overs having Ishant Sharma caught by Jonny Bairstow followed by Jadeja who was despatched in the same way.  That left only one possible wicket for Jimmy Anderson to take his 564th wicket.

With Shami and Bumrah at the wicket this wasn’t going to last long, it was quite funny to see Bumrah refusing to take a run, leaving Shami to face the music.  This remarkable match was polished off in style as Anderson got that wicket, sending Shami’s middle stump flying!  Another record broken!  It was wonderful to be there to witness the moment, the joy in the England camp was plain to see.  England had won the match by 118 runs, that was a lot closer than had seemed imaginable when India were 58 for 3! 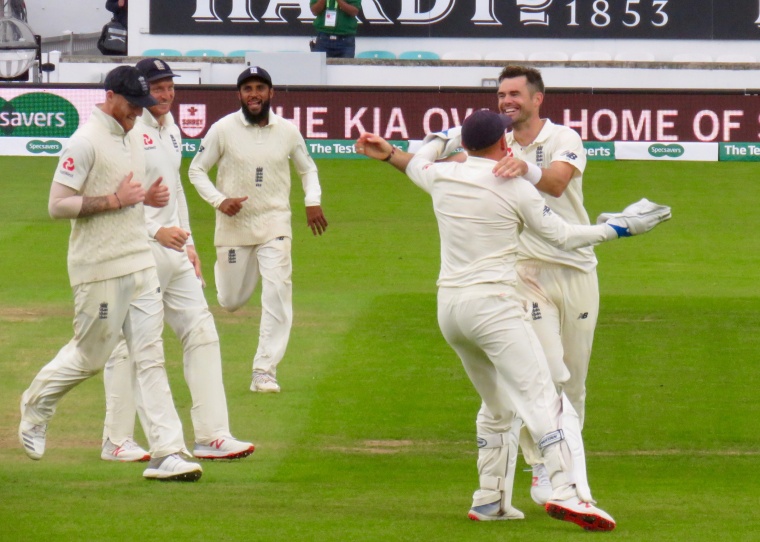 This was an amazing test match played as part of a wonderful series, it was played in a good spirit and some wonderful cricket was played by both sides.

Alastair Cook was of course Man on the Match.  Virat Kohli, India’s Man of The Series and Sam Curran, England’s Man of The Match. 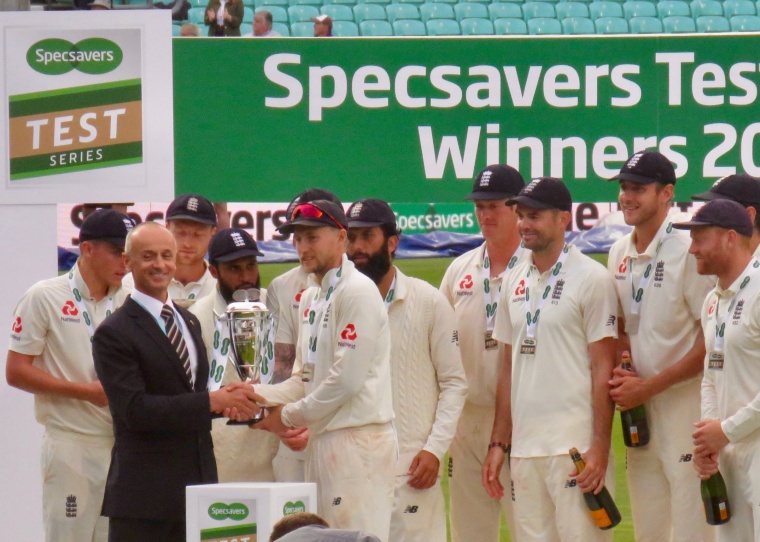 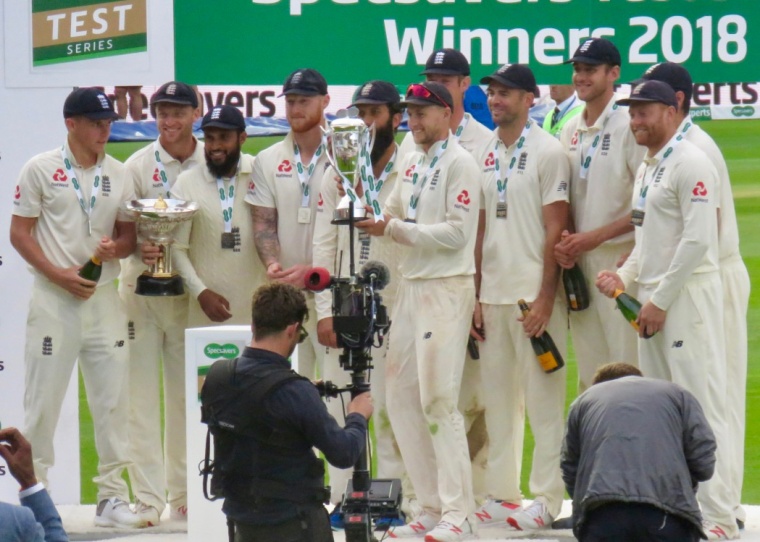 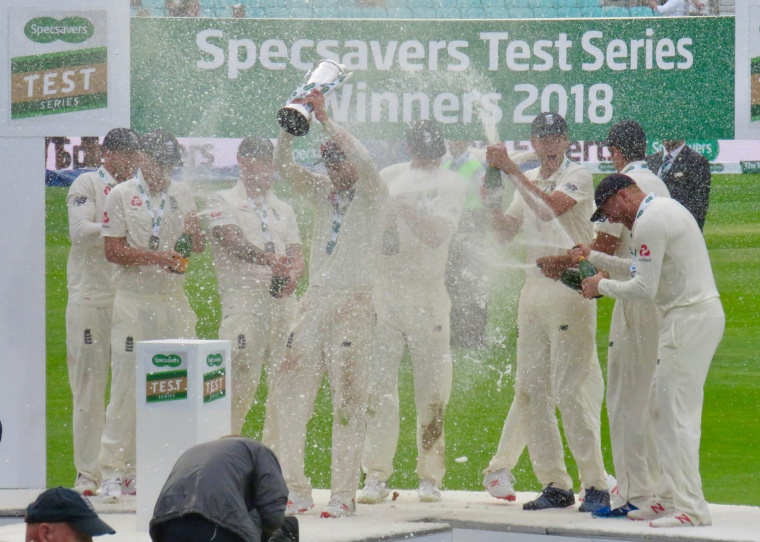